1, base of bole; 2, flowering branch; 3, fruit; 4, seeds. Redrawn and adapted by Iskak Syamsudin 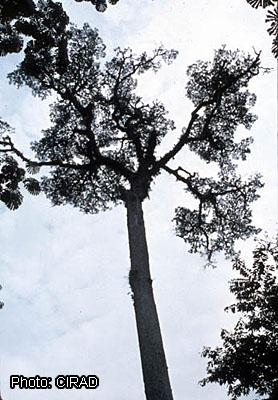 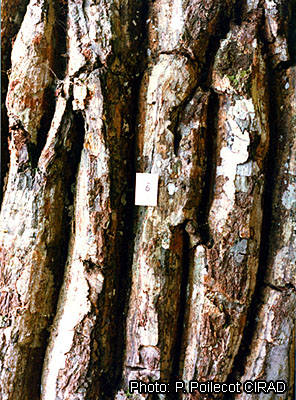 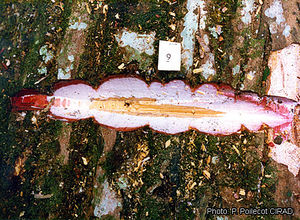 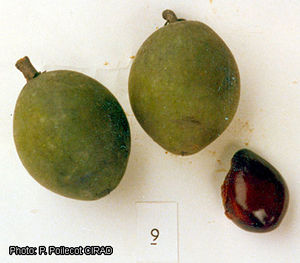 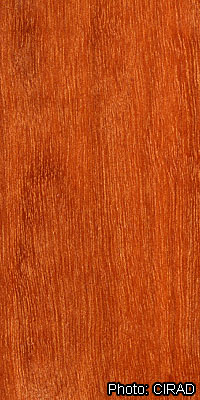 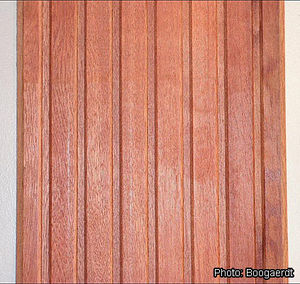 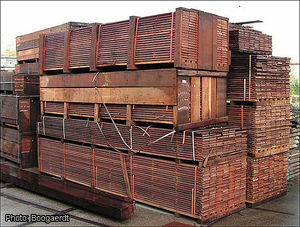 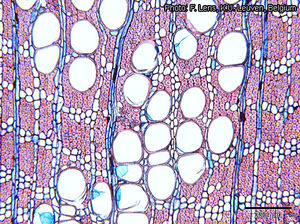 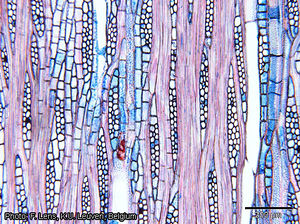 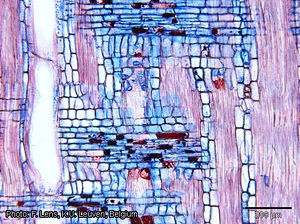 Autranella congolensis occurs from south-eastern Nigeria east to the Central African Republic, and south to Gabon and DR Congo.

The fruits are reported to be edible. An edible oil is extracted from the seeds; it is used for cooking in Gabon. Dry ground bark is applied to cuts and sores. A bark decoction is taken to treat gonorrhoea, syphilis, dyspepsia, colic and colds, and applied externally to treat fever, pain, skin diseases and wounds. The broken seed coats are strung together to make rattles.

Autranella congolensis timber is exported in small amounts from Central Africa. According to ATIBT figures, in 2001 the log export from Cameroon was 235 m³ and from Gabon 105 m³. In 2003 about 930 m³ of sawnwood was exported from Cameroon.

The heartwood is reddish brown with dark brown streaks, and usually distinctly demarcated from the greyish or brownish sapwood, which is 1–3 cm wide. The grain is straight or sometimes interlocked, texture fine and even. The wood is heavy, with a density of 910–990 kg/m³ at 12% moisture content. It dries slowly, with severe risk of deformation; it needs to be dried with care and quartersawing is recommended. The shrinkage rates are moderate to high, from green to oven dry 3.9–9.0% radial and 4.1–9.1% tangential. Once dry, the wood is often unstable in service.

The wood saws easily but slowly, with serious blunting effect on tools due to the high density and the presence of silica. Stellite-tipped sawteeth and tungsten- carbide-tipped cutting tools are recommended. The wood planes fairly easily with a smooth finish. It holds nails and screws well, but pre-boring is needed. The gluing properties are poor to satisfactory. It can be used for sliced veneer, but rotary peeling is difficult. It is resistant to acids, making it suitable for chemical containers and laboratory tables.

The wood is durable and resistant to fungi and dry-wood borers, but sometimes there is slight termite attack. It is considered resistant to marine borers, but in tests in Italy it was not resistant. It is resistant to impregnation with preservatives. The wood dust may cause serious irritation to nose, throat and eyes. The presence of saponins has been reported for the wood, which contributes to the resistance to fungi.

The wood of Autranella congolensis is similar to that of Baillonella toxisperma Pierre (moabi), which is used for similar purposes. It also resembles Tieghemella wood, but this has a lower density.

Autranella comprises a single species. It seems to be related to Mimusops and Tieghemella, the former of which differs in lacking stipules and having a shorter corolla tube and smaller fruits, the latter in lacking stipules and having stamens and staminodes inserted near the base of the corolla tube and larger seed scar. Baillonella toxisperma resembles Autranella congolensis, but differs in its shorter corolla tube, distinct stamen filaments and larger seed scar.

The fruits take 10–14 months to ripen. It has been reported that in the dry season many young fruits fall, long before they are ripe. Elephants eat the fruits and are probably the main seed dispersers. It is unknown whether seeds that have passed through elephants’ guts germinate more easily, but seeds that have not been eaten by elephants do germinate although the germination rate is low. Seedlings grow slowly. After germination, growth of aerial parts stops for about 2 months, after which seedlings grow at a rate of 1 cm per month, reaching an average height of 25 cm after 18 months and 36 cm after 29 months. Autranella congolensis forms arbuscular mycorrhizae with Glomeromycete spp.

The seeds with their thick and hard seed coat show a dormancy of 2.5–12 months before germinating. The germination rate may be up to 40%, but is often lower; the germination rate of depulped seeds is lowest, up to 9%. In the forest, seedlings of Autranella congolensis are often rare. Under experimental nursery conditions, the survival rate of seedlings was 100% after 18 months. The seedlings are shade tolerant, but are classified as non-pioneer light demanders, preferring small gaps in the forest canopy.

In general Autranella congolensis occurs in low densities in the forest, but locally in DR Congo 3–4 large trees per ha have been recorded.

Logs may split in the centre at felling and they also may show other defects in the central part.

A large Autranella congolensis tree may yield up to 20 m³ of usable wood.

Logs sink in water and cannot be transported by river. They have a good durability and can be left in the forest for considerable time without serious degrade.

Autranella congolensis is classified as critically endangered in the 2006 IUCN Red list of threatened species, with heavy exploitation for its timber being the main threat.

It will be difficult to manage natural forest in such a way that sustainable and economically sufficient production of Autranella congolensis timber is possible. Larger trees generally occur scattered in low densities. Natural regeneration is poor, and the low germination rate and dormancy of the seeds hamper large-scale production of seedlings for transplanting. Moreover, growth is slow and very long cutting cycles are probably required for sustainable harvesting. This makes Autranella congolensis a tree with few prospects for commercial timber production, and attention should concentrate on its protection.