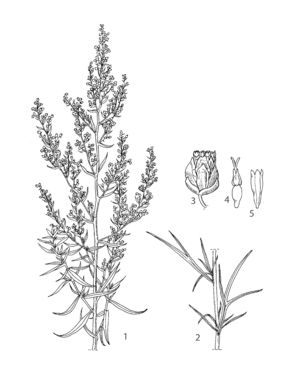 The origin of tarragon is not known with certainty; it may be Siberia. It has a very wide distribution, from central Europe and western and northern Asia (Asia Minor, Mongolia, northern China, Siberia) to western North America (up to Colorado and Texas). It is also widely cultivated, e.g. in Europe (France, Germany, Italy, the Netherlands), United States, Brazil, Egypt and India. In South-East Asia it is locally cultivated in the mountainous regions of Java (Indonesia) and it has been introduced into the Philippines.

The fresh or dried leaves of tarragon have a sweet anise-like scent and a peculiar bittersweet flavour and are used for seasoning foods like salads, soups, stews and sauces. They are particularly suited to flavour chicken, egg and lobster preparations. The popular tarragon vinegar is prepared by adding the herb to wine vinegar. Due to its low sodium content tarragon can be safely used as a substitute for sodium chloride in sodium-restricted diets. Medicinally, tarragon is believed to have aperient, stomachic, stimulant and febrifuge properties. On steam distillation, the leaves yield an essential oil (known as tarragon or estragon oil) which is used in perfumery, in canning pickles and in flavouring vinegar and liqueurs. Tarragon oil also possesses bactericidal and nematicidal activity. In the United States the regulatory status "generally recognized as safe" has been accorded to tarragon (GRAS 3043) and tarragon oil (GRAS 2412). The maximum permitted level of tarragon leaves in food products is 0.3%, and the highest level of the oil is 0.04% in baked goods.

A monograph on the physiological properties of tarragon oil has been published by the Research Institute for Fragrance Materials (RIFM).

Tagetes lucida Cav. (Compositae), the sweet-scented marigold from Mexico and Central America, also known as Mexican tarragon, resembles tarragon with respect to flowers and fragrance and is often used as a substitute for it. It grows well in the Philippines.

When started from cuttings, first leaves can be harvested 2-3 months after the plant has established. Although tarragon is a perennial plant and could be maintained for many years, the essential-oil content gradually diminishes in older plants. Therefore, commercial plantings are renewed every 3-4 years.

Tarragon is primarily a crop of temperate climates. It thrives in well-drained, light soil under full sun. It requires a soil pH of 6.3-7.8. It should be protected from excessive moisture, requiring an annual precipitation of only 300-1300 mm. It can survive light frost (wild forms even severe frost) and plant growth is stimulated by long days. In the Philippines tarragon is commercially grown in Silang, Cavite, at 600 m altitude and with average annual temperatures of 23-25°C.

In Asia and North America, wild plants occur in open, rather dry places, e.g. in meadows and steppe zones, from the plains to moderate elevations in the mountains.

Propagation of tarragon is normally by stem or rhizome cuttings. Stem cuttings 15 cm long are taken from shoot tips and rooted in mist beds or in coarse river sand with regular watering. Presoaking the basal ends in 100 ppm indolebutyric acid (IBA) overnight or dipping them in 2000 ppm IBA for a few seconds enhances rooting. In rhizome cuttings, pieces of the main rhizome, 5 cm long, together with roots and a new shoot, are severed from the mature plant. Planting material is established in polybags in the nursery prior to field planting.

In vitro propagation has also been reported for tarragon using leaf and shoot tip explants. Good shoot proliferation has been obtained on media such as Linsmaier-Skoog, White, Murashige-Skoog with various addenda. Rooting succeeds well using Techniculture plugs saturated with 1 ml of a solution with 1 mg naphthaleneacetic acid (NAA) per l.

In commercial farms in the Philippines garden plots are prepared by ploughing 2-3 times and incorporating chicken manure and rice hulls before the final ploughing. Tarragon is planted at 20-25 cm distance in rows 25-40 cm apart.

The production of methyl chavicol and methyl eugenol, two important components of tarragon essential oil, has been demonstrated in callus cultures obtained from leaf explants. The amount detected in vitro was up to 2000-fold less than the level accumulated in the plant. The presence of exogenous NAA in the culture was inhibitory to this accumulation. The detection of the metabolites in disorganized cells revealed that differentiation of secretory structures was not an absolute requirement for the synthesis of these compounds. The low levels detected were attributed to possible volatilization, active metabolism and autotoxicity of the compounds.

During the initial stage of growth, it is appropriate to mulch tarragon with straw. This prevents weed proliferation, conserves soil moisture and lowers the soil temperature, particularly during the dry season. Regular watering is necessary. A crop of tarragon lasts about 3 years.

Once the crop is well established, green leaves and tender tops may be harvested at intervals during the growing season. Per year 2-3 harvests may be obtained.

In commercial farms in the Philippines, the first harvesting is carried out 2 months from transplanting. Time of harvesting, however, is often dictated by the market demand, which is particularly high during the Christmas season.

No reliable information is available on the yield of tarragon under South-East Asian conditions. Commercial plantations outside South-East Asia show an average fresh herb yield of 2.5-3.7 t/ha in the first year and 5-6 t/ha in the second year of planting. An annual essential-oil yield of 40 l/ha is possible.

In the Philippines, freshly cut tarragon shoots are bundled and immediately packed in styrofoam boxes for delivery to market outlets. The dried product is obtained by air-drying the shoots under shade or by placing them in artificial dryers with temperatures not exceeding 43 °C. Commercial quantities of dried herb are preferably stored in well-closed barrels.

When tarragon oil is desired the dried herb is steam-distilled for 1-1.5 hours. The oil is stored in well-filled bottles and protected from light.

In Europe small germplasm collections of tarragon are present in the Czech Republic, Germany, Lithuania, Portugal, Russia and Slovakia. There are no known breeding programmes.