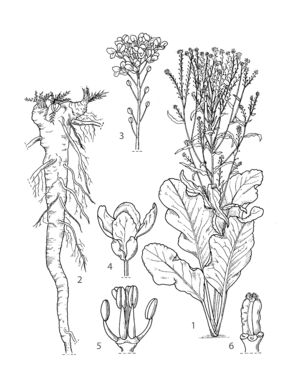 Horseradish is believed to originate from south-eastern Europe and western Asia where it has been cultivated since antiquity. It can now be found naturalized as an escape from cultivation in many temperate regions of the world. Its cultivation is most important in Europe and North America. In South-East Asia it is occasionally cultivated in mountainous areas, e.g. in Indonesia, Malaysia and the Philippines.

Horseradish roots have a sharp, mustard-like taste and are used as a condiment with fish, beef, sausages, poached chicken, egg salad, potato salad, and beets. The roots can also be dried, ground and mixed with vinegar, milk and seasonings to make horseradish sauce, used commonly as a condiment with beef. Young leaves and seedlings can be eaten as a salad. Horseradish root extract has been approved for food use by the Food and Drug Administration (FDA) of the United States.

Horseradish is said to have some medicinal qualities. Like mustard, it acts as a stimulant to the stomach and it shows antibiotic activity against bacteria.

Peroxidase obtained from horseradish roots has become an important industrial product used in analytical biochemistry, medicine and immunology for antibody and antigen labelling.

Most horseradish is produced by smallholders, and no production statistics are available. In the United States horseradish is grown commercially on about 800 ha and annual production is about 6000 t. The price for the raw product fluctuates from year to year. When there is a short supply of the domestic product, prices rise and some horseradish is imported.

In Japan "wasabi” (Eutrema wasabi (Sieb.) Maxim.) is used in a similar way as horseradish. The root bark of the horseradish tree (Moringa oleifera Lamk) has the same pungent taste and is used as condiment and garnish.

Due to the thick and deep taproot, horseradish can survive for many years, once it is established. Old roots, however, tend to become woody. The roots required for consumption and commerce should be fleshy, which is why the crop is cultivated as an annual. Starting from a part of the primary root, or from a one-year-old secondary root, a harvestable root is produced in one growing season, e.g. in the United States from April to November. Crowns of primary roots, stored during the winter and planted in April, flowered after 3 weeks in the United States and produced viable seed 1 month later. Pollination is mainly by insects. About 95% of the genotypes set viable seed - only cultivars with crinkled leaf-types often do not produce viable seed.

The thick and strong roots make horseradish difficult to eradicate from old fields. Any small pieces of root left in the soil will start growing the next season.

In the United States and in Europe the factors influencing yield (apart from fertilizers, diseases and pests) are size of the original cuttings and growing period. The larger the original cuttings, the higher the yield, although extremely large cuttings tend to produce hollow roots. Early planting and late harvesting also increase yield. In the United States enlargement of the primary root occurs mainly during the cooler months of September and October.

Outside its natural area, horseradish easily runs wild and survives along roads, fields, in hedges and places with a relatively rich soil. The species is quite variable in leaf size and form, in pungency of the root and in disease resistance. Possibly, horseradish originated from an interspecific hybrid, which may explain the occasional sterile plant. Several forms have been given special botanical names, but it seems more reasonable to name only different cultivars. Many cultivars exist, such as "Big Top Western" (leaves smooth), "Common" (leaves crinkled), "Swiss" (leaves smooth) in the United States, and "Spangsbjerg 12/68" and "Frieslander" in Europe.

Horseradish is suited for temperate climates and grows best in full sun to partial shade in a moist, rich, heavy soil with pH 6.8. A well-drained moisture-retentive loam is preferred. Sandy soils are not suitable, and neither are shallow clays with a hard pan. Horseradish can only be cultivated in the tropics at altitudes above 1000 m. It easily survives severe winter conditions.

Although horseradish can be propagated by seed, the normal propagation method is by root cuttings. Seed is generally only used in plant breeding as a means to obtain new cultivars. One-year-old secondary roots are selected from 2-year-old primary roots for planting the following year. Cuttings (up to 12 mm in diameter and 35 cm long) are placed obliquely in shallow furrows and covered with up to 10 cm of soil, after which the soil is firmed by rolling. Spacing is 45-60 cm within the row and 90-100 cm between the rows. An implement similar to a potato planter can mechanize the operation. Besides a driver it has 2 workers, who sit behind a box containing bundles of roots and plant them in the furrows where they are covered with soil by discs.

Horseradish can also be propagated by in vitro techniques using leaf pieces.

Peroxidase production by in vitro culture of horseradish is a rapidly developing area. The peroxidase content obtained is equal to or higher than that in field-grown roots.

After the cutting has rooted, its crown end is lifted slightly to break off the new secondary roots on the upper portion. This is done because the secondary roots of the basal end nourish the young plant and if secondary crown roots are permitted to develop they tend to prevent the main root from enlarging, resulting in a lower-quality root. High levels of fertilizer are not required, although trials in Europe show that the crop may accumulate up to 200 t/ha of dry matter per season and for this yield 500 kg N, 630 kg P2O5, 90 kg K2O, 260 kg Ca and 100 kg Mg are needed. This can be provided by 60 t/ha of farmyard manure, supplemented by some 200 kg/ha of N as a split dressing.

Weed control can be mechanical, or by post-planting use of chemicals such as xyfluorfen and oryzalin. Fusilade is a useful post-emergence grass killer. Horseradish itself is particularly difficult to eradicate. The most effective treatment is glyphosate at 4.5 kg/ha applied some 6-8 weeks after discing.

White rust, caused by the fungus Albugo candida, is the most damaging foliage disease, attacking the leaves and preventing normal root development. The disease spreads from the crown of the primary root into secondary roots. Control is possible by carefully selecting planting material, spraying with fungicides in the growing season and eradicating infected plants.

Turnip mosaic virus causes mosaic mottling and chlorotic rings on the leaf blade. Most plants are infected to a certain degree with this virus, for which many hosts are known. It is transmitted by aphids and mechanical means, not by the seed. Control is possible by careful selection of the planting material.

The causal agent of brittle root is not known. The leaves of infected plants become chlorotic and the aerial part of the plant collapses; the roots become turgid and snap when bent. This is the most serious disease and is possibly transmitted by insects.

In temperate climates the roots are harvested in late autumn or early spring, by hand or by a harvesting machine operating to a depth of about 50 cm. Care should be taken not to damage the roots. Secondary roots are broken off, and cuttings to be kept for planting the next crop are buried in outdoor pits or kept in cool cellars. In some areas horseradish is grown as a perennial crop with a harvest every 2 years. Horseradish gives best results when grown as an annual crop.

In the United States average yields of primary roots are 7 t/ha ("Common"), 8 t/ha ("Swiss") and 12 t/ha ("Big Top Western"). In Europe average yields are 7.5 t/ha for primary roots and 4.9 t/ha for lateral roots. There are considerable differences in yield between cultivars. In a collection of 10 European cultivars the content of isothiocyanates varied from 12.2 mg per g freeze-dried root in the Danish "Spangsbjerg 12/68" to 20.4 mg/g in the German "Frieslander". Tissue-cultured regenerated leaf pieces show considerable somaclonal variation and appear to be a good source of breeding material; peroxidase content varied in some cell lines.

Roots are cleaned of excess dirt and either graded and sold immediately or stored under cool moist conditions without washing or chemical treatment (e.g. in polythene bags at 2 °C). Storage of up to 6 months at 0-1 °C at 93% or 97% relative humidity (RH) had no deleterious effect on the composition of horseradish oil, the vitamin C content, or on the crude fibre, but weight losses after 4 months in storage were 1.6-3.3 times greater at 93% than at 97% RH. The amount of blackening of the root was found to be greater when roots were stored at high temperature. The levels of peroxidase in roots stored for one month at 20 °C, 4 °C or -18 °C showed that at 20 °C the peroxidase level did not change compared with the initial value, whereas cold storage increased peroxidase levels. Processors manufacture fresh horseradish sauce continually from supplies of root held in cold storage. High-quality horseradish sauce is white and pungent but in storage the sauce gradually looses its pungency, becomes discoloured and develops an earthy odour and taste. Shelf-life of the sauce can be increased by adding fresh whipped dairy cream, by storing the sauce at -18 °C and by adding an acid solution (e.g. vinegar). Researchers continue to look for a more keepable end-product.

The United States Department of Agriculture maintains a germplasm collection of about 200 accessions of horseradish. The variability is great and offers ample scope for breeding new cultivars. Wild types, for example, contain markedly higher levels of peroxidase compared with domesticated cultivars. A typical cycle for breeding, testing and introduction of a new cultivar takes 8 years. Breeding goals include higher yield, disease resistance and high content of desired compounds, e.g. peroxidase.