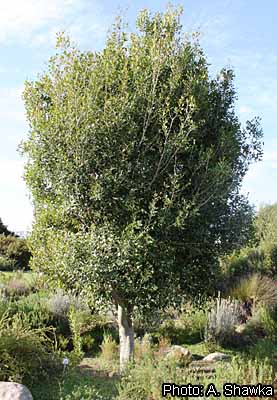 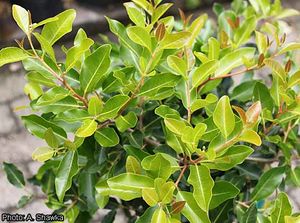 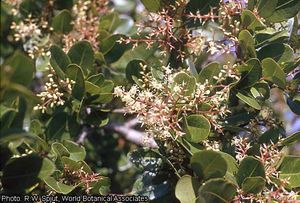 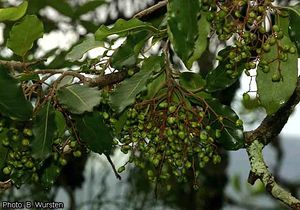 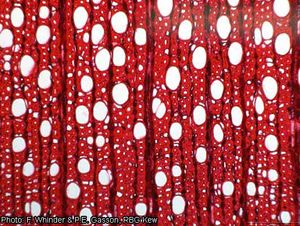 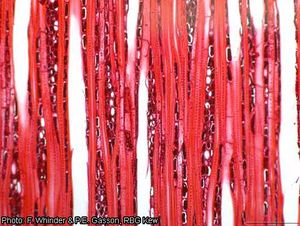 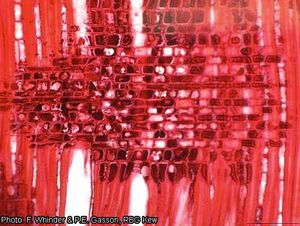 Apodytes dimidiata is extremely widespread, occurring in many tropical and subtropical regions of Africa and Asia, and also in Queensland (Australia). In tropical Africa its area of distribution extends from Nigeria eastward to Eritrea and Ethiopia, and southward through eastern Central Africa and East Africa to Angola and South Africa; also on the islands of the Indian Ocean.

The wood of Apodytes dimidiata, named ‘white pear’ in trade, is used for construction in house building, flooring, furniture, agricultural implements, carving and turnery, and formerly for wagons. It is suitable for interior trim, ship building, vehicle bodies, musical instruments, toys, novelties and precision equipment. It is also used as firewood.

In tropical Africa Apodytes dimidiata is widely used in traditional medicine. In southern Africa, Zulu people apply an enema prepared from the root bark against intestinal parasites. In Madagascar a preparation from the bark is taken as a stimulant tonic. In Kenya the bark enters into medicines against stomach problems. Sap of the leaves is dropped in the ear to treat purulent ear-ache. A leaf decoction is taken against menorrhagia and madness. The tree is grown for its attractive display of white blossom and red and black fruit, and as ornamental shade tree and hedge plant. The flowers are much visited by honey bees.

The wood of Apodytes dimidiata is mainly used and traded locally, but small amounts are also traded on the international market. No data on sources, destinations and quantities of traded timber are available.

The heartwood is pale grey to brownish grey or nearly white, with brownish patches, darker near the centre of the log; it is not clearly demarcated from the thin sapwood. The grain is straight, texture fine and even.

The wood is fairly heavy, with a density of 720–900 kg/m³ at 12% moisture content, hard and tough. It is recommended to discard dark-coloured core wood before drying to avoid damage due to differential shrinkage rates. Boards of 2.5 cm thick can be kiln dried in 20 days, but a mild drying schedule is needed. The shrinkage rates are high, from green to oven dry about 6.0% radial and 9.2% tangential. At 12% moisture content, the modulus of rupture is about 133 N/mm², modulus of elasticity 15,370 N/mm², compression parallel to grain 75 N/mm², shear 13 N/mm², Janka side hardness 9200 N and Janka end hardness 11,500 N.

The wood works well with hand and machine tools, but in boring and mortising it tends to become rough. It polishes to a very smooth surface. The wood nails, screws and glues well. It is not durable; it is susceptible to fungal and borer attacks. It is fairly easy to treat with preservatives.

The leaves of Apodytes dimidiata have shown antiprotozoal activity against leishmaniasis. Glycosides, named apodytine A–F, are at least partly responsible for the effect. The bark contains the iridoid genipin and a 10-monoacetate derivative. At low concentrations these compounds are active against the snail Bulinus africanus which transmits bilharzia, and at these concentrations their use was shown to be safe for mammals including humans. Eudesmane type glycosides have also been associated with the molluscicidal properties.

The leaves contain small amounts of camptothecin and related compounds, which are important antineoplastic agents. Endophytic strains of the fungus Fusarium solani isolated from Apodytes dimidiata also produce these compounds, and can be used for in-vitro production of anticancer drugs.

Apodytes has been included in the family Icacinaceae, but its place is uncertain since that family was split. It comprises about 8 species and seems to be most closely related to Raphiostylis. Additional to the widespread Apodytes dimidiata, 2 other species have been described from southern Africa, 3 from Madagascar, 1 from northern Australia and 1 from New Caledonia, but opinions about the exact number of species vary widely. Apodytes dimidiata is variable and has been subdivided into 2 subspecies or varieties based on leaf shape and hairiness of the ovary, but these seem to be poorly segregated.

In the evergreen forest in the Cape region of South Africa, Apodytes dimidiata is considered a pioneer species, with relatively weak competitive ability against species characteristic of later successional stages, such as Podocarpus latifolius (Thunb.) R.Br. ex Mirb. and Pterocelastrus tricuspidatus (Lam.) Walp. In South Africa flowering occurs in October–April, and fruits ripen in December–June. Germinating seeds have been found in excrements of wild pigs, which serve as seed disperser, probably together with other mammals.

In Ethiopia Apodytes dimidiata occurs in upland forest with Podocarpus, Olea and Syzygium spp. at 1700–2600 m altitude, often remaining scattered in grassland after forest clearing; it also occurs in fringing forest and secondary forest and in Acacia– Combretum woodland. In East Africa it grows mainly in dry upland forest and forest remnants, less often in humid forest and evergreen bushland, up to 2400 m altitude; in coastal areas it occurs in woodland or dry open forest. In southern Africa it is widespread in coastal evergreen shrub vegetation, riverine forest, Brachystegia– Julbernardia woodland and mountain grassland. In South-East Asia it is rare, occurring in primary rainforest on slopes and in ravines, and in fringing forest. Apodytes dimidiata is frost hardy.

Propagation by fruit stones is easy, but they take 4–12 months to germinate. They are placed in a seed tray 3–5 mm deep in a mixture of river sand and compost (1:1 ratio) and shallowly covered with fine sand or fine compost. They should be dipped in a fungicide before sowing. The seed tray should be kept moist. The fruit stones are easily attacked by insects, and the germination rate varies greatly, between 10% and 70%. Early growth is slow and young plants have to be kept in the nursery for another year. Once established the plants are hardy.

Apodytes dimidiata is well suited for home gardens because it usually does not disturb foundations of buildings or paved areas.

Logs should not be left in the forest for long periods because they may split badly. In the core of the bole, the heartwood is often darker due to starting decay.

Apodytes dimidiata is widespread and locally common. There are no indications that it is in danger of genetic erosion.

No selection programmes are known to exist.

The wood of Apodytes dimidiata is likely to remain important for various purposes, including more special applications such as precision equipment. Apodytes dimidiata is an attractive garden and amenity tree that deserves more attention outside South Africa, where it has already some reputation. Its possible role in snail control for the prevention of bilharzia needs further research, as well as its antileishmanial activity. Also its role in the production of anti-cancer drug precursors by Fusarium solani warrants investigation. The taxonomy of Apodytes needs clarification.