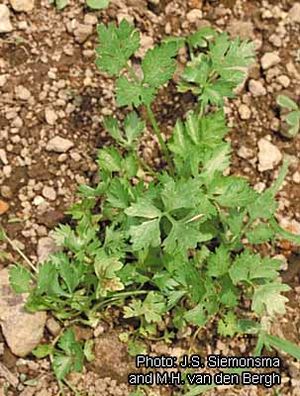 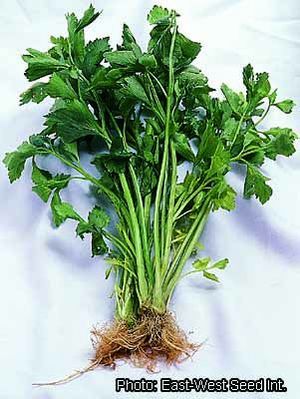 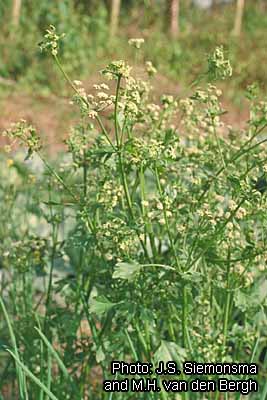 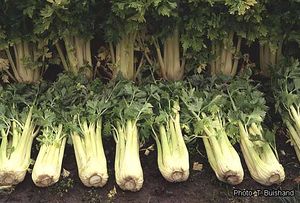 Celery occurs wild in Europe, the Mediterranean region and in Asia west of the Himalayas. The ancient Greeks and Egyptians already cultivated celery. It was probably first grown as a medicinal plant, later for the leaves as flavouring. Celery has a long history in China, dating back to at least the 6th century AD. Chinese celery most resembles leaf celery. Cultivated celery was recorded in 1623 in France, where plants with a milder taste were selected from wild plants for use as a vegetable. This was the so-called stalk celery with large, swollen petioles. At the same time celeriac with its large edible tuber was selected, probably in Italy. These two types became most important in Western temperate areas. Various types of celery are now grown all over the world. Celery is reported as being cultivated in several African countries, more commonly in highland regions than in lowlands. In Africa it is occasionally found as an escape or relic of cultivation, e.g. in Eritrea, Ethiopia, Mozambique and Réunion, and more commonly in South Africa.

The most common use of celery is for its thick, succulent leaf stalks that are used, often with a part of the leaf blades, in soups, cooked dishes and salads for the Western style kitchen. Celeriac or turnip-rooted celery is mainly used as a cooked vegetable in stews and soups but is becoming increasingly popular grated as a raw salad. Leaf celery, also called smallage, is chopped and used as garnish and flavouring, either fresh or in dried powdered form. In temperate countries, celery is also grown for its seeds, which yield a valuable volatile oil used in the perfume and pharmaceutical industries. Celery seeds can be used as flavouring or spice either as whole seeds or, ground and mixed with salt, as celery salt. Celery salt can also be made from an extract of the roots. Celery seed aids in the elimination of uric acid and is often used for the relief of symptoms of arthritis, rheumatism and inflammation of the joints. Its diuretic properties assist in relieving fluid retention. Celery seed also relieves pain. Celery has several applications in traditional medicine, particularly as a diuretic and emmenagogue, and against dengue fever and rheumatism.

There is a considerable production and international trade in stalk celery and celeriac among Western countries. In Africa leaf celery and stalk celery are usually grown on small plots for market gardening, whereas celeriac is only rarely grown. No statistical information on areas under production or on market volumes are available.

The characteristic smell of the celery plant is due to the lactone sedanolide (3-butyl-3a,4,5,6-tetrahydrophthalide), sedanenolide (3-butyl-4,5-dihydrophthalide) and related phthalides. These are also the character-impact compounds of the essential oil from celery leaves and seed. The results of tests with mice suggest that phthalides may be effective chemopreventive agents of forestomach cancer. The flavonoid apigenin was also isolated from celery; this compound has vasodilatory action. Celery extracts exhibited hepatoprotective activity in tests with rats. Tests with mice affirmed the use in traditional medicine for painful and inflammatory conditions; extracts showed antinociceptive and anti-inflammatory activities.

The seeds contain a volatile oil and some compounds with antioxidant activity, as well as compounds with mosquitocidal, nematicidal and antifungal activities. Celery plants contain the furanocoumarins bergapten and psoralen, potent photosensitizers which may cause dermatitis in field workers. Celeriac (celery root) is a frequent cause of food allergy, often connected with pollen allergy; the major allergen is the protein api g 1.

Apium comprises about 30 species, most of which are indigenous in temperate South America. Only a few Apium species occur in tropical Africa, and probably only a single one is truly indigenous: Apium nodiflorum (L.) Lag. Apium leptophyllum (Pers.) F.Muell. ex Benth. is a widespread weed originating from Central America.

Apium graveolens has been subdivided into 4 varieties:

– Var. secalinum (Alef.) Mansf. Leaf celery, cultivated for the aromatic leaves. It has slender green petioles, and is closest to the wild type.

– Var. dulce (Mill.) Pers. Stalk celery, cultivated for its strongly developed, fleshy petioles, which are curved in cross-section and grooved on the external surface, with a distinct joint where the leaflets are attached.

– Var. rapaceum (Mill.) Gaudin. Celeriac, grown for the roundish tuber up to 15 cm in diameter, mainly derived from the hypocotyl, but also incorporating part of the taproot and stem. Its flesh is creamy white and firm, although usually softer than carrots.

The latter 3 varieties can better be considered to represent cultivar groups.

Some celeriac cultivars used in East Africa are ‘Balder’ and ‘Giant Prague’. Stalk celery cultivars that have been in use in East Africa for some time are ‘Pascal’, ‘Utah’, ‘Golden Self-Blanching’ and ‘Tendercrisp’. The seed company Technisem is now recommending the stalk celery cultivars ‘Plein Blanc Pascal’, ‘Tall Utah’ and the heat tolerant ‘Elne’ with fleshy green stalks; the latter cultivar also performs well in lowland regions of West Africa. East West Seed Company developed leaf celery cultivars for the tropics, with more tender leaves and less thick stalks, called Chinese celery: ‘Juji’ is a selection for year-round cultivation in tropical lowland, ‘Duka’ is hardier, especially selected for the rainy season, and ‘Safiya’ performs best at medium or high elevations.

Celery is biennial, but when cultivated for its vegetative parts mostly grown as an annual. Germination and seedling growth are rather slow. Leaf celery is usually direct sown, sometimes transplanted one month after germination; stalk celery and celeriac plants are mostly raised in a nursery and need 2 months to reach a suitable size for transplanting. During the vegetative phase, the aboveground parts of the plant mainly consist of leaves, the stem being very short. The stem elongates after vernalization, ending in compound umbels. Celery flowers are mainly cross-pollinated. The root system is quite restricted and superficial. Crop duration depends on type, cultivar, and market preference. Harvesting of early cultivars of leaf celery starts 55–60 days after direct sowing or 40–50 days after transplanting one-month-old nursery plants, whereas late cultivars are harvested from 3 months after direct sowing. Transplanted stalk celery is harvested 3–4 months and celeriac 4–5 months after transplanting.

The wild type of Apium graveolens is a halophilous marsh plant, which explains the high water needs and good salt tolerance of cultivated types. Types of European origin are usually cultivated in the tropics at higher elevations. They are adapted to areas with monthly mean temperatures of 15–21°C. Exposure at the five-true-leaf stage to 5–10°C for a minimum of 10 days causes bolting. Consequently, premature flowering of these types is seldom a problem in the tropics. Asiatic tropical cultivars of leaf celery, however, start bolting easily when exposed to temperatures below 20°C. Celery demands a moist, pervious, fertile, if possible slightly saline soil, with pH 6.0–6.8, well supplied with organic matter.

Celery seed is almost entirely produced in temperate areas and imported in Africa, although it is possible to harvest seed of tropical types of leaf celery. In the highlands of East Africa it may be possible to produce seed from the heat-tolerant types of stalk celery. The weight of 1000 seeds is 0.3–0.5 g. Celery seed is broadcast on a nursery bed or, mostly for leaf celery, sown in rows directly in the field. It is slow to germinate. After some weeks, the small and delicate seedlings emerge and should be well protected with a layer of long grass or similar cover. Light shading is beneficial, especially in lowlands. To reduce the germination period required some farmers soak the seeds for one or two days prior to sowing. It is even better to mix the fine seeds with sand and keep this mixture moist until the first signs of white root tips become visible. This pre-germinated mixture should then be sown, and the seedbed should be kept well watered until the seedlings have clearly emerged. The nursery stage may take one month for leaf celery to 6–10 weeks for stalk celery and celeriac. Seedlings are planted at a spacing of 30 cm in the row and 40 cm between rows. Celery responds well to organic manure incorporated into the plantbed prior to planting.

Once seedlings are well established, earthing up is recommended as it is not possible to plant the small seedlings at the required depth of about 4 cm. Older cultivars of stalk celery required blanching, but this is no longer needed for present-day cultivars, although many people still believe that blanched stems taste sweeter. In case blanching is desired, plants should be earthed up with approximately 15 cm of soil or the leaf stalks should be tied together about 3 weeks prior to harvesting. Plants must be allowed to grow rapidly to obtain the desirable quality with succulent leafstalks; therefore regular irrigation is essential. Large amounts of nutrients are also needed for a good celery crop. The removal of nutrients in 20 t/ha of stalk celery is estimated at 75 kg N, 17 kg P, 140 kg K, 36 kg Ca and 11 kg Mg. Celery is susceptible to physiological disorders, which can usually be remedied by applying 10–20 kg/ha of borax and 100 kg/ha of magnesium sulphate. Boron deficiency is especially prominent in soils with a high pH. Cultivation must be superficial in order to avoid damaging the roots. Mulching the soil surface helps to retain moisture and to smother weeds.

A serious disease under humid conditions is late blight caused by Septoria apiicola. It is also referred to as celery rust and is characterized by many small pale brown spots with dark centres. Proper aeration is important and during the rainy season a wider spacing is required in comparison to the dry season. Early blight, caused by Cercospora apii, can also become problematic. Both fungi are seedborne, and therefore seed from a reliable source should be used. They can also survive on plant refuse in the soil. Seed treatment and crop rotation are recommended practices. Erwinia carotovora, a bacterium causing soft rot of the petiole, is also soilborne and requires crop rotation. Damping-off of seedlings caused by species of Pythium, Sclerotium and Rhizoctonia is common. Rhizoctonia solani is also reported to cause lesions and rot of the petioles.

Few specific pests have been reported on celery, but polyphagous insects such as aphids, spider mites, leafhoppers, whiteflies and leafminers may affect the crop.

Leaf celery is harvested once-over by uprooting or by cutting at ground level, or is ratoon-harvested by cutting about 5 cm above ground level, with several cuttings at 3-week intervals. Stalk celery is usually cut at ground level as a whole plant. For home consumption, people may only harvest a few stalks per plant at a time. Commercial growers often tie the stalks together, leaving the tender young stalks well covered. Celeriac is harvested by uprooting.

Leaf celery can produce up to 20 t/ha. The yield of stalk celery can reach 20 t/ha or more, depending on soil fertility, farm management and climatic conditions. In Europe, yields of up to 50 t/ha for both stalk celery and celeriac have been obtained, but in the tropics the yield potential is much lower.

The harvested product should be removed from the field as soon as possible, washed, sorted, packed and transported to the market. Stalk celery can be stored for about a month at a temperature near 0°C at high humidity. It should be isolated in storage, because it readily absorbs flavours from other produce. Celeriac can be stored more easily. In some Western countries, much stalk celery is processed by canning.

The main breeding objectives for celery are to improve disease resistance and tolerance of high temperatures, for stalk celery the tenderness of the petioles and the self-blanching character.

Celery is currently not an important commercial vegetable in Africa and since most produce is purchased by Asian and Western people, market opportunities are not likely to increase considerably, unless a change in food habits takes place. The markets for leaf and stalk celery in the cities in francophone West Africa offer better opportunities. It seems likely that more improved cultivars for tropical conditions will soon become available.