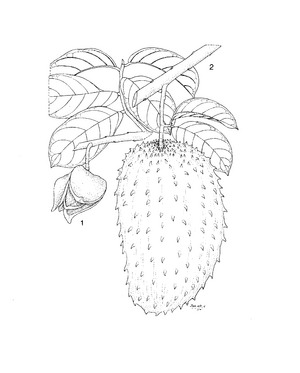 The soursop is a native of tropical America where it is an important fruit crop. It was one of the first fruit trees introduced to the old world after Columbus discovered America - the Spaniards brought it to the Philippines at an early date - and can be found growing in most tropical countries.

Soursop can be consumed fresh for dessert when fully ripe or mixed with ice-cream or milk to make a delicious drink, as is done in Java, Cuba and parts of America. However, more often the puree is consumed after squeezing the pulp through a sieve. It can be made into a fruit jelly, juice (with the addition of sugar), nectar or syrup. It is also used in the preparation of ice-cream. In Indonesia sweetcake ("dodol sirsak") is made by boiling soursop pulp in water and adding sugar until the mixture hardens. In the Philippines young soursop fruits with seeds that are still soft are used as a vegetable. Mature but firm fruit may be made into candies of delicate flavour and aroma.

There are no data on area and production in South-East Asia, except for the Philippines where the average annual production in the late 1970s was 8500 t from 640 000 trees, 490 000 of which were of bearing age. With more than 100 000 trees each, central Luzon and western Visayas are the leading regions. The perishable nature of the fruit is a serious handicap for production in orchards, but the tree is common in home gardens and the fruit is found in markets throughout South-East Asia. International trade is virtually limited to processed products, in particular canned or bottled juice from countries in Central and South America.

The soursop consists of about 67.5% edible pulp, 20% peel, 8.5% seeds and 4% core by weight. Sugars constitute about 68% of the total solids. Soursop is a good source of vitamins B (0.07 mg/100 g pulp) and C (20 mg/100 g pulp) and a poor to fair source of calcium and phosphorus. The most desirable characteristic of the soursop is its extremely pleasing fragrance and flavour. The flesh is like that of the cherimoya; the pure white colour is very stable, also during processing.

The soursop tree branches freely through the emergence of sylleptic shoots. Extension growth can occur at any time of the year and proceeds fairly steadily; there are no prominent flushes. The emergence of flower buds follows extension growth. The position of the flowers - mainly terminal on short shoots and anywhere along the axis of long shoots - suggests that they are initiated terminally, the meristem being pushed to a lateral position as extension growth of the shoot is resumed.

A dry season imposes synchronous shoot growth and flowering, leading to a harvest peak 3 months later, but the synchronization is gradually lost in the course of the rainy season.

The flowers are protandrous, the pollen is shed as the outer petals open towards the evening. The inner petals open much later and only very slightly, admitting small insects attracted by the fragrance of the flowers. Presumably these insects effect cross-pollination, though rather inadequately, for few flowers set fruit and many fruits are misshapen since numerous ovules are not fertilized.

In Indonesia and the Philippines sweet-fruited and sour-fruited types are distinguished. The sweet type (Indonesia: "sirsak ratu") has small and few-seeded fruits with a sub-acid flavour; it is the predominant type in a few localities only. A similar distinction between sweet and sour types is made in America.

Soursop is the least hardy of the Annona species, requiring a warm and humid tropical climate. It grows at elevations up to 1000 m and as far as 25°S in sheltered sites. Growth and fruiting are set back severely by cold spells, and light frosts kill the tree. A dry season enhances leaf fall and synchronizes extension growth and flowering to some extent. Yields may be higher under these conditions, provided that high humidity prevails during the period of fruit set; there are indications that, as for other Annona spp., both very high and low humidities may be detrimental to fruit set. Where humidity tends to be low, a sheltered site is recommended to limit transpiration (also because the tree is shallow-rooted). Most soils are suitable, but drainage should be good because the tree does not tolerate waterlogging.

Trees can be propagated clonally, in particular through various budding and grafting techniques on seedling stocks, as is the practice in parts of America (e.g. Columbia, Venezuela). However, soursop is commonly raised from seed. Seedlings are acceptable because populations are fairly uniform - seeds of the sweet type, for instance, are generally true to type - and because the juvenile phase lasts only 2-4 years. Seeds may be sown directly in the field or in a nursery bed. Within 20-30 days 85-90% should germinate, and seedlings can be planted out after 6-8 months. Halving the leaves and temporary shading are necessary for transplanted seedlings which have not been raised in containers. Spacing in orchards should be 3 m × 4 m to 4 m × 6 m.

Being a small and early-bearing tree, the soursop may be planted as an intercrop between larger fruit trees such as mango, avocado, and santol. When the main crop requires the space, the soursop trees are grubbed out.

The area around the base of the tree should be kept free from weeds or covered with mulch to avoid dehydration of the shallow roots during the dry season. The soursop can tolerate dry soil conditions, but the trees shed too many leaves if they experience prolonged drought, and in that situation they would benefit from supplementary irrigation. Application of manure and/or NPK fertilizer in small doses a few times each year promotes growth and fruiting, but no quantitative data on fertilizer requirements or recommended leaf nutrient levels are available.

Trees usually assume a satisfactory form, but in some cases it is necessary to limit the tree to a single trunk by cutting out competing twigs as early as possible. Water sprouts, interlacing and crowded branches should also be removed. Inadequate pollination appears to be the main factor limiting yield and hand pollination is often recommended. However, it is rarely practised and is feasible only where there is a definite flowering period.

As long as tree vigour is maintained, serious damage by diseases and pests is largely limited to the fruit. Anthracnose (Colletotrichum gloeosporioides) is the principal disease of soursop in a humid environment. Fruit production may be severely limited by infection of flowers and fruit, which rot or shrivel; moreover, the disease affects maturing fruit and leaves and stems as well. It has been suggested in the West Indies that selection for the ability to set fruit under humid conditions is worthwhile. Where there is a dry season it is perhaps possible to advance flowering and fruit set by irrigation, in order to escape the period of highest humidity. Brown stem rot (Corticium sp.) infects and causes the decay of branches and may kill the tree. A thorough clean-up at the end of the dry season, including burning of the infected material, should help to contain the disease during the wet season.

Scale insects often infest the trees and mealy bugs may occur in masses on the fruit. If ants are adequately controlled, natural enemies should be able to cope with these pests. Fruit can be bagged to avoid damage from fruit flies. Annonaepestis bengalella is a fruit borer; the moth occurs from India to Java and the Philippines. The large caterpillars of Meganotron rufescens and those of Papilio agamemnon are often found eating the leaves. The damage caused by these last 3 pests generally does not warrant chemical control.

The soursop fruits should be harvested when fully grown and still firm. They are considered mature when their spines are set far apart and the shiny green colour turns dull-green or yellowish-green. If picked prematurely, fruit quality remains poor. On the other hand, fruits left to ripen on the tree are often attacked by bats if they do not first fall to the ground. In a non-seasonal climate, fruit may ripen throughout the year, but usually there are 1-3 harvest periods, with a prominent peak in the course of the main season.

The fruits have to be picked selectively. They are cut from the peduncles using a sharp knife or pruning shears and placed in bamboo baskets lined with soft material such as straw.

Yields are generally low: one or two dozen fruit per tree per year, each fruit weighing more than 1 kg on average. More precise figures for a 35-year-old plot in Hawaii show that yields can be much higher: the mean fruit numbers per tree were 33, 34 and 70 in the 4th, 5th and 6th year after planting; at the rather low density of 215 trees/ha these yields were equivalent to 9.2, 7.6 and 18 t/ha.

Harvested fruit shows a two-stage rise in respiration. The first rise is presumably triggered by detachment from the tree, the second is the climacteric rise. Mature, firm fruit ripen 3-5 days after harvest and can be held only 2-3 days thereafter, even if cooled. Thus, harvested fruit should be dispatched to distant markets without delay. Because of their tender skin, fruit should be handled with great care.

Ideally, fruit to be processed should be stored in single layers so that each day the ripe fruit can easily be selected for processing. These fruits are washed in chlorinated water to remove dirt and reduce the microbial load. The washed fruit is peeled and cored by hand to retain the pulp for further processing.

It is not known whether soursop seeds can be stored long enough for inclusion in germplasm seedbanks. Trees of "sirsak ratu" form part of the germplasm collection at Subang, West Java. Soursop populations in South-East Asia are rather uniform. Even in the Americas there are few reports of deviating types, but the preference for clonal material in Columbia and Venezuela may be an indication that variability is greater in the centre of diversity.

There has been little selection and breeding work: so far crosses of soursop with other Annona species have not been successful.

Largely confined to home gardens because of erratic yield and short shelf life, production of soursop is too scattered to supply a substantial processing industry. Presumably this is why soursop growing in South-East Asia has not expanded convincingly in recent times.

Much higher yields are within reach, mainly through better pollination. The perishable nature of the fruit is not a problem if processors buy the fruit in quantity. A breakthrough towards production in orchards therefore seems feasible, particularly because the small tree size facilitates orchard management and the short period from planting until first crop reduces the risk involved in commercial production.

The efficiency of orchard production can be greatly enhanced if the trees grow synchronously as occurs in areas with a dry season. Intensive pollination, growth regulation, crop protection and harvesting can all be properly organized if the different stages of the crop cycle are segregated in time.