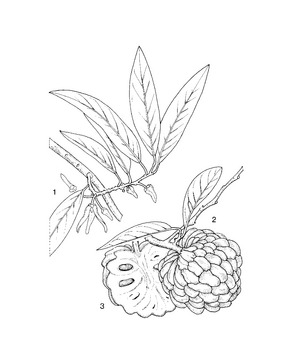 A. cherimola × A. squamosa

The cherimoya is indigenous to the tropical highlands of Peru and Ecuador, while the sugarapple is widely distributed throughout tropical South America. Most hybrids resemble cherimoya in vigour and tree habit, but exhibit flowering and fruiting characteristics intermediate to both parents. Cherimoya is grown commercially in Chile, Bolivia, Spain, United States and New Zealand; the sugarapple in Thailand, the Philippines and Malaysia, and the atemoya in Australia, Florida, Hawaii and Israel.

Fruits are normally eaten fresh. The pulp can be utilized as a flavouring for ice cream. The green fruit and seed have effective vermicidal and insecticidal properties.

Between 50-80% of the fruit of sugarapple is edible. The vitamin C content is appreciable (35-42 mg/100 g) and slightly higher than in grapefruit. The nutrient value of thiamine, potassium and dietary fibre is also significant.

Atemoya trees are hybrids, morphologically intermediate between the above two species and vary in height from 3-10 m.

All three crops are semi-deciduous, sugarapple shedding its leaves in the dry season, cherimoya and atemoya in the subtropics in spring. Flowering coincides with the resumption of extension growth. Usually a second flush of shoot growth - and sometimes a third - occurs during the growing season, bringing out further flowers, but these are unlikely to set fruit. In fact flowering can be brought about at almost any time of the year by pruning and defoliation to force a new flush. Thus the main flush and flowering may be advanced by removing the leaves 1-2 months before they would normally be shed. Flowering is best on spurs and short shoots and fails completely on the very vigorous shoots common in young cherimoya and atemoya trees.

Poor fruit set is the main factor limiting yield; it affects both the number of fruit and fruit shape and size. The stigmas are receptive for only a few hours, a day before the anthers of that flower dehisce. At that time the flowers are just beginning to open and are not very accessible to visiting insects. Only small beetles of the Nitidulidae have been shown to be effective pollinators; 2-3 visits are needed to pollinate an adequate number of stigmas for full fruit development. Pollen germination is very poor. Varying degrees of compatibility exist between cultivars and species. Hand pollination greatly improves fruit set. It takes about 30 days for an emerging flower bud to reach full bloom; fruit ripens 4-5 months later, but at low temperature maturation is greatly delayed and in the subtropics the harvest goes on from late autumn to early spring.

In the Philippines three types of sugarapple are grown; in addition to the common green-fruited seeded type there are some trees bearing purple fruit and others green seedless fruit. In Thailand named cultivars are traded, including the green "Fai" and the yellow, easy-to-peel "Nahng". In both countries sugarapple is the most important of the annonaceous fruits.

In Australia the atemoya "Pink's Mammoth" is being superseded by the more productive "African Pride". Under warmer semi-tropical conditions "Geffner", an Israeli selection, may be preferred. Recommended cherimoya cultivars are "Bays" and "White" (California), "Fino de Jete" (Spain, yielding 100-150 kg/tree per year) and "Reretai", "Burton's Wonder" and "Burton" (New Zealand).

Sugarapple thrives in the tropics up to about 1000 m elevation and has the reputation, particularly in India, of being a hardy, drought-resistant crop. This is only partly correct. Although the rest period and leaf fall enable the tree to bridge a severe dry season, it requires adequate moisture during the growing season, responding very well to supplementary irrigation. The importance of moisture is borne out by the fact that in India as well as South-East Asia fruit set is largely limited to the onset of the rains, notwithstanding the prolonged flowering season.

Cherimoya and atemoya are at home in the highlands above 1000 m with a dry season and have found their way to the subtropics. They have a slightly greater cold tolerance (-3°C for mature trees) and lower optimum temperatures for fruit growth and maturation. Excessively high temperatures may cause premature ripening and fermentation of the fruit. For atemoya it has been shown that low relative humidity (less than 70%) shortens the receptive period of the stigmas and leads to flower abscission; similar problems may explain the poor fruit set in sugarapple before the rainy season. Cultural methods which raise humidity in the orchard include close tree spacing, windbreaks and overhead misting. Windbreaks are also needed to prevent damage to trees swaying in the wind, most cultivars being shallow rooted. Such damage appears to be at least partially responsible for the incidence of collar rot.

Although the crops grow on a wide range of soil types from sands to clay loams, higher and more consistent yields appear to be obtained from trees grown on sand or sandy loam soils. Moreover, vegetative growth can also be controlled more easily through irrigation and fertilizing. On the heavier and more poorly drained soil types, waterlogging is a major cause of floral abscission and reduced fruit set. On shallow soils, mounding improves the soil depth and drainage, and mulching encourages the development of surface feeding roots.

Annonas are usually grafted onto seedling rootstocks of cherimoya or sugarapple. Sugarapple rootstocks tend to reduce tree size. The most common methods used are whip, whip and tongue, and cleft grafting. Success rates are usually high if grafting is carried out with the start of sap flow after the rest period. In the Philippines patch budding prior to leaf abscission, i.e. during the cool and dry season (November-February) is recommended.

Scion performance on seedling rootstocks varies greatly with respect to growth rate, susceptibility to waterlogging, water stress and bacterial wilt. Propagation of cultivars on their own roots or on clonal rootstocks would eliminate this variability. However, to date, propagation by means of cuttings, layering and tissue culture techniques has not been very successful. Current spacings range from 8 m × 6 m to 6 m × 4 m for cherimoya and atemoya to 5 m × 3 m and 4 m × 3 m for sugarapple.

Early training of the trees is essential to carry heavy crops without limb breakage. For vigorously growing trees (mainly cherimoya cultivars) the open goblet is the most suitable tree shape. Where growth is weaker, trees with a central leader are preferred. Formative pruning is carried out during the rest period.

In Thailand sugarapple is rejuvenated each year to maintain fruit quality. Laterals weakened by bearing are removed and vigorous replacement shoots are headed back. The trees are pruned when the leaves are about to fall, leading to an early resumption of growth. The new growth is supported by irrigation until the rainy season sets in. In this way the harvest period is brought forward.

Strong apical dominance in some cherimoya and atemoya cultivars gives rise to vigorously growing whips which fail to flower. These vigorous shoots are tipped during the growing season to stimulate the emergence of flowering laterals. Axillary bud break can be improved by removing the uppermost leaves after tipping. If these treatments do not have the desired effect, chemical defoliation, either during early bud break or in the middle of the growing season, is a last resort. A range of defoliants has been tested and a mixture of 250 g urea and 1 g ethephon (Ethrel®) per litre, plus wetting agent, has been most successful.

Annona trees require uniform soil moisture from flowering to harvest. Irrigation should be scheduled according to tensiometer readings. High humidity within the tree canopy may be maintained by using low delivery rate undertree or overhead sprinklers.

The fruits have a high demand for potassium. Mature, high-yielding trees may require between 2-4 kg/year of potash. Potassium leaf levels can be maintained above the suggested critical level of 1% only by applications before flowering. Annona trees are sensitive to zinc and boron deficiencies. Where boron is deficient, borax at 2 g/m2 should be broadcast over the ground area under the canopy. Zinc deficiencies can be corrected by zinc sulphate heptahydrate sprays (0.1%) applied at monthly intervals. Boron and calcium sprays during flowering and early fruit set may also be beneficial in reducing the incidence of internal fruit browning.

It may be possible to improve fruit set by releasing large numbers of pollinator beetles in the trees on days when conditions are conducive to set. Hand pollination is also very effective in increasing fruit set and yield. In California, it is the prime means of obtaining consistently high yields. Techniques for hand pollination of atemoya flowers involve transferring the collected pollen to the stigmas with a brush, or using puffers or pollination guns to blow pollen onto the stigmas. The Japanese persimmon pollination gun has proved highly successful in California. With high-yielding cultivars such as "African Pride", some fruit thinning may be necessary to regulate crop load and to maintain fruit size.

The major root rot disease is bacterial wilt (Pseudomonas solanacearum). Symptoms are collar rot, dark internal discolouration of the root wood tissue, tree decline and eventual death. Chemical control of the disease is not possible. Sugarapple rootstocks are highly susceptible. The major fruit diseases are black canker (Phomopsis spp.), diplodia rot (Botryodiplodia spp.) and purple blotch (Phytophthora spp.). The incidence of these fruit diseases increases under moist or wet conditions. They can all be controlled by a regular spray programme using either mancozeb or copper oxychloride.

The most commonly found pests are mealy bugs (Planococcus spp.), fruit flies (Dacus spp.), spotting bugs (Amblypelta spp.) and scales (Parasaissetia spp.). All of these can be controlled in an integrated pest management programme. In the Philippines a fruit-boring moth (Annonaepestis bengalella) is the most destructive pest.

Fruits are mature when a cream colour develops between the interstices of the carpels and when carpels become smoother and less rounded. Picking rounds have to be made every few days over a harvest period of about 3 months. Fruits are normally clipped from the trees and packed into shallow trays prior to sending to market.

Yield varies considerably with cultivar and species. The sugarapple is relatively prolific, consistently producing between 10-15 t/ha per year. With the atemoya and cherimoya, yields are more variable and range from 5-20 t/ha per year.

Annona fruits are soft and highly susceptible to mechanical injury, skin and pulp blemish and fungal rots. The fruits have a post-harvest life of only 2-5 days with a maximum cool storage of 2 weeks at 15°C and high humidity.

Considerable variation exists between cultivars and seedlings of cherimoya and atemoya; sugarapples are less variable.

Germplasm collections are held in Spain and New Zealand (mainly of cherimoya) and in Australia and Florida (cherimoya and atemoya).

Little effort has been exerted to select more desirable Annona types. Breeding programmes conducted in the Philippines in the early 1900s were not successful in producing new commercial atemoya cultivars. An intensive selection and breeding programme in Annona species is being undertaken at Maroochy Horticultural Research Station, Nambour, Australia. Interspecific crossing between the sugarapple, cherimoya, atemoya and A. reticulata L. and A. diversifolia Saff. is possible. Selections with round, symmetrical fruit of low susceptibility to blemish and with a long post-harvest storage life are sought.

The prominent place of the sugarapple in Thailand and the Philippines can be further strengthened if the shelf-life of the fruit can be extended, either through breeding or better post-harvest technology. This could make the fruit more popular in other parts of South-East Asia too, particularly in eastern Indonesia with its marked dry season.

The scope for superior cherimoya and atemoya cultivars in highland areas and northern Thailand still needs to be investigated.