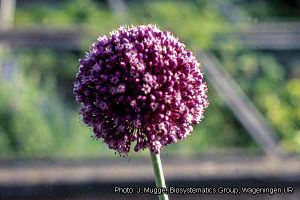 A. cepa (spring onion, left) and A. ampeloprasum (leek) on the market

Allium ampeloprasum comprises several vegetables of which the most important ones are:

More or less bulbous leek was well known and cultivated by ancient Egyptians, Greeks and Romans. Modern non-bulbous leek is grown nowadays on all continents, except in areas where high temperatures or heavy rains rule out its cultivation. In Africa leek is produced on a small scale in the Sahel countries during the cool season, and in the East African highlands, mostly around the big cities for Western consumers. Local cultivars of vegetatively propagated leek can be found in the tropics, e.g. in East Africa (Kenya), Indonesia and the West Indies. Great-headed garlic is grown in the highlands in some countries close to the tropics, e.g. Réunion, Saudi Arabia and northern India. Kurrat is grown in the Middle East, pearl onions on a small scale in Europe.

Allium ampeloprasum comprises several vegetables of which leek is the most important one worldwide. Leek is used as a cooked vegetable. The ‘leek’ is the cylindrical pseudostem, developed by deep planting and earthing-up. The green leaves can be used for soups. Sliced leek is often dehydrated for use in soups. Sessile cloves of great-headed garlic can be used in place of garlic, but their taste is less satisfying when raw. This inconvenience disappears with cooking. The leaves of kurrat are used in salads or as a cooked vegetable to add flavour to dishes. Pearl onions are used for pickling.

Europe is the most important leek-producing continent, with over 500,000 t annually. France is the largest producer. Most international trade is within the European Union. In tropical Africa leek production is minor and no statistics are available. During winters with severe frost in Europe, some of the leek grown in Kenya has been exported to Europe.

The flavour of leek is linked with the presence of S-alkyl-cysteine sulphoxides, propyl- and methyl-cysteine sulphoxides being predominant in modern leeks. This precursor is transformed into a number of S-containing volatiles (e.g. thiosulphinates) when raw leek is cut. The taste of cooked leek, more appreciated by consumers, is also linked with S-containing volatiles, to which a small amount of saponins may add a little bitterness. In great-headed garlic allyl- and propyl-cysteine sulphoxides are present in leaves and cloves, resulting in a taste intermediate between leek and garlic. Some of the saponins found in leek have in-vitro antitumour activity.

Leek can be replaced by bunching onions with a long thick pseudostem, such as some cultivars of Allium fistulosum L. or ‘Beltsville Bunching Onion’, a tetraploid seed-propagated cross between Allium cepa L. and Allium fistulosum. In South Africa Allium dregeanum Kunth is collected in the wild by Hottentot people; it is called wild leek, similarly to the wild ecotypes of Allium ampeloprasum on both sides of the Mediterranean.

Robust erect herb up to 150 cm tall; true stem consisting only of a basal plate or disk, with little or no bulb formation, or with bulbs producing two kinds of cloves, small stiped ones and larger sessile ones; roots adventitious.

The Allium ampeloprasum complex comprises wild as well as cultivated elements, and the taxonomy is rather confused. In the literature, cultivated leek is often named Allium porrum. Great-headed garlic produces in its bulbs 3–6 very large cloves (up to 60 g). Its stiped cloves, 8–10 mm in diameter, are protected by a hard ‘shell’ and can remain in the soil for more than 1 year before sprouting. Its very large leek-like umbels do not produce seeds. European bulbous leek has sessile cloves covered by a thin silvery-white skin, and sometimes a few shortly stiped cloves without shell. It is found only in old home gardens, e.g. the ‘pearl onion’ grown in Germany and the Netherlands. When tropical vegetatively propagated forms of leek are experimentally grown in temperate countries, they appear to belong to this category, since they produce bulbs, usually with a central spherical clove surrounded by small ones. Some of them never flower under long-day conditions, e.g. the West Indian leek never reached the flowering stage when grown in southern France for 20 years. On the other hand, the Indonesian ‘Anak prei’ flowers in the Netherlands, its seeds giving a heterogeneous progeny. The behaviour of African vegetatively propagated leek under long-day conditions is unknown.

Modern leek has been bred during more than two centuries for elimination of cloves, leading to strictly seed-propagated plants with perfectly cylindrical pseudostems. However, two vestigial cloves may appear at the base of the scape of seed-producing plants. Kurrat (synonym Allium kurrat Schweinf. ex K.Krause), cultivated in the Middle East, is a seed-propagated plant looking like a small leek, but grown for successive harvests of green leaves. ‘Taree Irani’, grown in Iran, is a kurrat-like plant producing in its umbels a mixture of flowers and bulbils.

Vegetative growth in leek occurs at temperatures of 4–25°C, with an optimum at 16–20°C. Even at optimal temperatures germination is slow (10–12 days) compared with other vegetables. A leafy cotyledon appears first, bearing the seed testa at its apex. At optimal temperatures new leaves are formed every 6 days. Plants reach the harvest stage when 15 leaves have appeared, but continue to grow in thickness.

Floral initiation occurs about 180 days after sowing in temperate conditions, plants exposed to low temperatures (5°C) bolting earlier. Growth of the floral stem is enhanced by long days; consequently bolting and flowering rarely occur under tropical conditions. Leek flowers are pollinated by insects. Both self- and cross-pollination occurs. Besides seed, bulbils (topsets) may be formed in the umbel of some cultivars.

A cool season of at least 4 months is needed for good growth of leek. Leek cultivation in hot humid lowlands below 500 m is rarely successful. At higher latitudes during the cool season and at elevations above 1000 m leek is easier to grow. In the lowlands, 130 days are needed (60 days in the seedbed, 70 days in the field) for harvesting leek more than 1 cm in diameter. When temperatures are above the optimum (e.g. 22°C at night, 30°C during the day), leaf senescence can be as rapid as the production of new leaves, resulting in no diameter growth at all. Plants may be harvested from 100–120 days after transplantation, but may be kept in the field longer as they continue to grow thicker (20–25 mm). For leek cultivation, soils must be deep, loose, their pH higher than 5.6, with a good amount of organic matter.

In the tropics leek is propagated either by seed or by tillers.

One g contains 300–400 seeds. Leek seed is normally imported. It does not show dormancy. For modern cultivars, about 1000 seeds are sown per m2 in a nursery roofed with plastic or with palm leaves, the roofing being removed after emergence of seedlings. Seedlings 15–20 cm tall and pencil-thick are transplanted vertically into holes 10–12 cm deep, at a rate of 200,000/ha, e.g. at a distance of 10–15 cm in the row and 30–45 cm between rows. To obtain long pseudostems, planting is done at the bottom of furrows to facilitate earthing-up. For vegetatively propagated leek, lateral shoots (tillers) are planted in the same way as seedlings.

The most important leaf disease is purple blotch (Alternaria porri), to which plants are more susceptible on calcium-deficient acid soils. It can be controlled with dithiocarbamate fungicides or iprodione. In the lowlands, roots are invaded by Pyrenochaeta terrestris in the same way as for garlic or onion. The roots and basal plate can be destroyed by the fungus Sclerotium cepivorum or the nematode Ditylenchus dipsaci, potentially noxious in the tropics if introduced in highlands (e.g. by cultivation of contaminated garlic cloves). Rust (Puccinia spp.) and white tip (Phytophthora porri), which are major diseases in temperate areas, have not been recorded in Africa.

Thrips tabaci can cause serious losses in yield and quality. It can be controlled by insecticides, but also overhead irrigation can decrease thrips infection. This method of irrigation is also beneficial against purple blotch if applied between 11 a.m. and 3 p.m.

Leek is harvested 70–120 days after planting, but may be kept in the field longer. The plants are dug up with a spade, washed, the dried or yellowing leaves eliminated with their sheaths, the remaining leaves trimmed, and roots cut at 1–2 cm. Following consumers’ preference, the green foliage is cut shorter or longer. For vegetatively propagated leek the thicker pseudostems are sold, the thinner lateral shoots kept for own use or for a new planting.

Under tropical conditions, 15–20 t obtained 70 days after planting in the lowlands during the cool season can be considered a good yield; 40 t/ha might be obtained at elevations of 1500–2000 m if purple blotch is perfectly controlled.

Freshly harvested and carefully cleaned leek can be kept 2–3 days, vertically packaged together in baskets or perforated plastic bags. Storage at 0°C is possible for up to 60 days.

Major breeding objectives in temperate countries are yield, uniformity and disease resistance. Leek can be considered an allogamous autotetraploid with 20–30% self-pollination in seed-production fields. Nowadays seed companies either go on maintaining traditional open-pollinated cultivars under permanent mass selection pressure, or offer F1 hybrids. Plant vigour loss by selfing is about 30% for the first generation and 40% between S1 and S2. F1 hybrids are based on male sterility. F1 hybrid leek has 20% higher yields and is more uniform. The rationale behind this is the exclusion of progeny resulting from self-pollination. F1 cultivars can have a different genetic background but they always have the male sterile parent in common. This line is vegetatively propagated via in-vitro multiplication and/or formation of bulbils, obtained in the umbels by early flower ablation and exposition to photoperiods of 20 hours. Cytoplasmic male sterility has recently been transferred from Allium cepa. No special breeding work for or in tropical countries has been reported.

Leek is a productive and highly nutritious vegetable. The need for an Allium used as a cooked vegetable can be satisfied by Allium ampeloprasum or Allium fistulosum. If leek is preferred, breeding for tropical conditions could be an interesting objective. Since there seems to be a general cross fertility between all tetraploid Allium ampeloprasum types, a wide array of subtropical parents would be available. An example of such research is a cross between leek and kurrat realized in the Netherlands to introduce virus resistance. The advantages and disadvantages of vegetatively and seed-propagated leek in tropical conditions should be studied. Breeding for resistance to purple blotch would be interesting too.