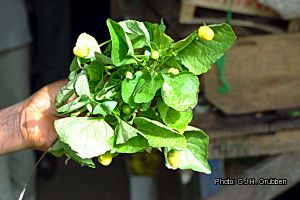 product on the market

Acmella oleracea is not known from the wild. It is thought to have been derived through cultivation from Acmella alba (L’Hér.) R.K.Jansen, a species native to Peru and Brazil. It must have been in cultivation for a considerable time and has spread throughout the tropics. It is locally cultivated throughout Africa and escapes from cultivation have been reported. In East Africa it has become naturalized. It was probably introduced in the Indian Ocean Islands by the Portuguese and subsequently spread in East Africa by Indian labourers who came to work on railroad construction around 1900.

In the Indian Ocean islands (Comoros, Madagascar, Réunion, Mauritius) and India the main use of the leaves of Acmella oleracea is as a steamed vegetable. The raw leaves are used as a flavouring for salads, soups and meats in Brazil and India. It is grown widely as an ornamental because of the attractive colourful heads.

The most common and widespread medicinal use is to treat toothache and throat and gum infections. Worldwide the flower heads are used either fresh or dried and powdered, but the use of roots and leaves has been recommended as well. The plant is further recommended as a cure for dysentery and rheumatism, and to enhance the immune system. It is used against blood parasites, especially against malaria, both prophylactic and curative.

Data on nutritional composition are not available. Raw Acmella leaves and flower heads have a pungent taste; they cause numbing of the mouth when chewed and induce the production of saliva. This sensation may be attributed to the alkylamide fraction.

The flower heads contain up to 1.25% of spilanthol (N-isobutyl-4,6-decadienamide), an antiseptic alkaloid. Spilanthol is effective at very low concentrations against blood parasites. It is a poison for most invertebrates, but is said to be harmless to warm-blooded animals. Different sources commenting on the composition of the essential oil distilled from fresh flowers agree on a high content of β-caryophyllene (21–30%). Other major constituents reported are limonene, thymol, γ-cadinene and germacrene.

Acmella is a pantropical genus of about 30 species, with 2 of these native to tropical Africa, and 2 introduced. Most Acmella species were formerly considered to belong to the genus Spilanthes. The 2 native species, Acmella caulirhiza Delile (synonym: Spilanthes mauritianus auct. non (Rich.) DC.) and Acmella uliginosa (Sw.) Cass., have similar uses as Acmella oleracea and have undoubtedly been mixed up in the literature. Acmella caulirhiza can be distinguished from Acmella oleracea by the presence of ray flowers. Acmella uliginosa has a 4-merous corolla.

As an escape from cultivation Acmella oleracea is found in weedy habitats. Naturalized populations are usually found in wet localities such as lakeside marshes.

Acmella oleracea is grown as a vegetable in Madagascar and Comoros, and also in Réunion and Mauritius, but details have not been reported. It is sold in markets in Madagascar throughout the year with peak supplies from November–March. As an ornamental it is propagated by seed or by cuttings taken from plants in the vegetative phase. For germination a temperature of at least 21°C is needed. It needs frequent watering.

As Acmella oleracea is widely grown, and is naturalized in parts of East Africa, it is certainly not threatened.

It would be worthwhile documenting the cultivation practices, characteristics and properties of Acmella oleracea grown in the Indian Ocean islands. Acmella oleracea and its wild ancestor Acmella alba are interesting for further research on medicinal potential, especially concerning activity against blood parasites other than malaria. The research community should be made aware of the updated nomenclature in the genera Acmella and Spilanthes to avoid replication of research findings, doubtful identifications and the use of incorrect names.