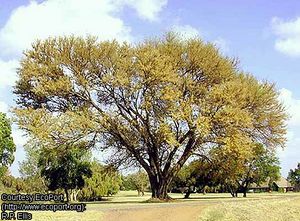 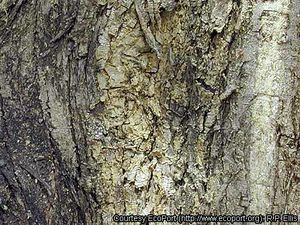 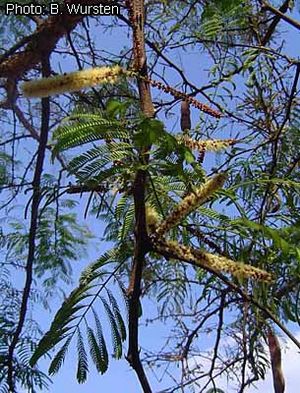 leaves and flowers (B. Wursten) 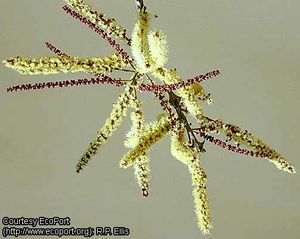 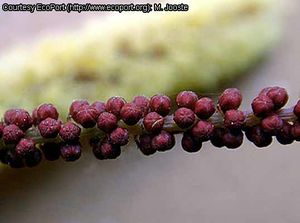 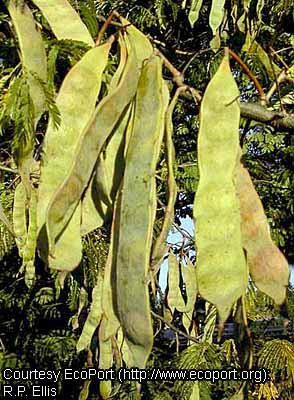 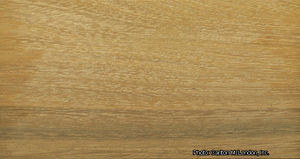 The wood is used for interior and exterior joinery, fences, wagons, railway sleepers and as mining timber. It is suitable for flooring, shipbuilding, sporting goods and implements. Acacia galpinii is occasionally planted as ornamental or roadside tree.

The wood is only used locally and not traded on the international market.

The heartwood is reddish brown to dark brown and distinctly demarcated from the creamy sapwood. The grain is often irregular, texture moderately coarse. The density of the wood is about 800 kg/m³ at 11% moisture content. Shrinkage during drying is medium. At 11% moisture content, the modulus of rupture is 112 N/mm², modulus of elasticity 13,140 N/mm², compression parallel to grain 61 N/mm², shear 15.9 N/mm², Janka side hardness 9070 N and Janka end hardness 10,100 N. Although the wood is tough and resilient, it works well with sharp tools, but sawing requires considerable strength. A good finish can be obtained with waxes and oil. The wood has good natural durability, being fairly resistant to decay and termite attack, but the sapwood is susceptible to attack by Lyctus borers and blue stain fungi.

The wood is almost free of tannins, but contains a range of flavonoids and melacacidin. A number of proteracacinidins (proanthocyanidins) have been isolated from the heartwood.

Acacia is a large pantropical genus, comprising more than 1300 species; most of them distributed in Australia (more than 900), more than 200 in America, and about 130 in Africa. Acacia galpinii belongs to subgenus Aculeiferum, which includes all African Acacia species with non-spinescent stipules and hooked prickles.

The wood of Acacia burkei Benth. (black monkey thorn) has also been used for furniture and wagons, but it is heavier and darker and supplies are limited. This species occurs in about the same region as Acacia galpinii, and may reach 27 m tall; it has fewer pinnae and leaflets per leaf.

The chocolate-brown heartwood of Acacia goetzei Harms is used for construction, heavy joinery and furniture; it is very hard, heavy and durable. Acacia goetzei occurs further north than Acacia galpinii, to Ethiopia, and has fewer pinnae pairs and thicker pod valves.

Acacia galpinii typically occurs in riverine woodland, but it can also be found scattered on termite mounts and in open woodland, at 350–1500 m altitude. It is most common on loamy or clayey soils. Older trees are frost-tolerant.

Seeds germinate easily, but soaking the seeds in hot water for one night prior to sowing is advantageous. Seeds can be sown in seedling trays filled with river sand and covered with vermiculite. Seedlings generally show good survival, even under regular drought conditions. In experimental plantings in Zimbabwe seedlings showed a survival rate of 86%.

Being a larger sized Acacia, Acacia galpinii gives a comparatively high yield of workable wood. Individual trees may yield up to 2.5 m³ of bole wood.

Large planks can be sawn from the bole and sometimes sawlogs can also be obtained from the larger branches of the crown.

Although Acacia galpinii is fairly widespread, it is not very common in most regions. However, it is not under threat of genetic erosion.

Acacia galpinii is an interesting timber tree of drier regions. It nodulates well and grows fast, and so it would be a potential candidate for testing for afforestation in dry regions, and it is an excellent shade tree for lawns in parks and large gardens.