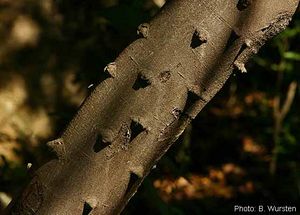 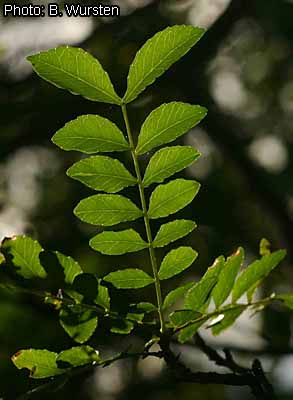 In Zimbabwe and South Africa ground stem bark or leaves are commonly used as a snakebite remedy either as an oral medicine or as a local application to the wound. The root bark or stem bark is chewed as a mouth wash to treat mouth ulcers and to treat toothache; ground stem bark or root bark is applied to aching teeth or as a wound dressing. A root infusion is taken to treat infertility and male impotence. A leaf or fruit infusion is taken to treat syphilis, gastro-intestinal disorders and internal parasites. An infusion of the stem bark is taken as a tonic and to treat epilepsy. A root or leaf decoction or infusion is commonly taken to treat colds, fever, influenza, cough, pleurisy and bronchitis. Root powder is eaten to treat blood poisoning and skin impurities. Pounded roots are also applied as a paste to the skin to treat skin problems. Smoke of the burnt plant is inhaled to treat dizziness. The acrid fruit leaves a persistent burning sensation in the mouth when chewed. They are taken to treat colic, flatulence and paralysis (palsy). Grounded stem or root bark is also rubbed into scarifications to treat paralyzed legs. The ground bark is given to cattle to treat gall-sickness.

Young twigs are used as toothbrushes. The hard yellow wood is used in making implements (handles, yokes and planks).

The stem bark and root bark are commonly sold in local markets.

Sesamin has been used as dietary fat-reduction supplement, although no controlled studies on this application have been performed yet. Pellitorine showed significant ovicidal and insecticidal activity against several important agricultural pests, and also against the house mosquito Culex pipiens and the freshwater snail Biophalaria glabratus. Sitosterol-β-D-glucoside showed significant anti-ulcer properties in different tests with rats.

Zanthoxylum is pantropical and comprises about 200 species, with tropical America being richest in species. Mainland Africa harbours about 35 species, whereas about 5 species are endemic to Madagascar.

Another southern African Zanthoxylum species, from Angola and Namibia, has medicinal uses. In Namibia the Himba people drink a fruit or seed decoction of Zanthoxylum ovatifoliolatum (Engl.) Finkelstein to treat stomach problems. It is also given to domestic animals. The Topnaar people take a fruit decoction to treat sore throats. Seeds are chewed for the same problem. The fragrant powdered dry fruits and seeds are used as body perfume.

Zanthoxylum capense is common in dry woodland or bush on sandy soils and in rocky localities, from sea-level up to 2000 m altitude. It flowers in January and fruits between February and May. It is highly variable, with small- and large-leaved forms, especially in juvenile shoots, suckers and coppiced specimens. It is often confused with Clausena anisata (Willd.) Hook.f. ex Benth.

The seeds of Zanthoxylum capense are primarily dispersed by monkeys. The seeds do not germinate easily and it is best grown from seedlings collected from under the tree.

Zanthoxylum capense is a host of the citrus psylla Trioza erytreae (Homoptera).

As Zanthoxylum capense is common in its area of distribution, it is not likely to be threatened by genetic erosion.

The stem bark, root bark and leaves of Zanthoxylum capense contain several biological interesting compounds, including sitosterol-β-D-glucoside and the alkaloid pellitorine. It therefore merits further research into its pharmacology; its safety profile needs to be established as well.