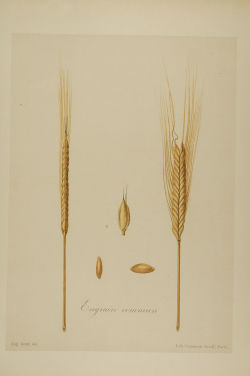 Origin : Turkey to Irak and Iran

Einkorn is basically a hulled wheat (apart from T. sinskajae).

The cultivated form is Triticum monococcum subsp. monococcum. It includes a type with naked seeds, called T. sinskajae A. Filat. et Kurk. (1975), and endemic to Daghestan.

Descriptions and drawings of the two cultivars known in Western Europe in 1880 and 1909 are found in Les meilleurs blés.

According to Heun et al. (1997), all crop and weedy einkorns come from one wild population of Karacadag mountains, in Turkey, not far from the archaeological sites of Abu Hureyra and Mureybit. It appears as cultivated from 7000 - 6000 BC, from Anatolia to western Iran. It spread with agriculture in all the Middle-East, in the Balkans and the Danube region. Einkorn was later largely replaced by naked wheats. Its cultivation subsisted as a relic crop in many places of Europe up to now. It has recently come back as a specialty and health food.

Einkorn is not suitable to make French-style bread, and is mostly used boiled (entire or broken) in porridges and soups.