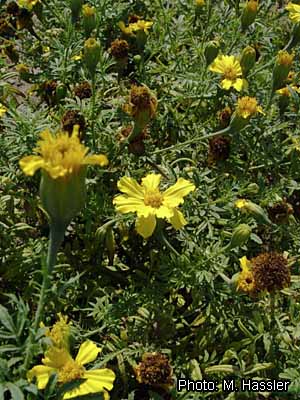 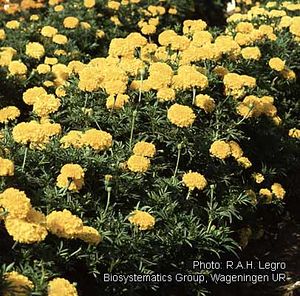 Tagetes erecta is indigenous to Mexico and Guatemala and most probably naturalized in the rest of Central America and the western Andes of South America. It became naturalized also elsewhere in the tropics and is widely cultivated all over the world (including Africa and the Indian Ocean islands) as a popular garden ornamental. It is cultivated commercially for its dye mainly in Latin America; in Africa on a small scale in Zambia and South Africa.

The yellow flowers of Tagetes erecta are the source of two food-colorant products: ‘marigold meal’ and ‘marigold extract’. Marigold meal consists of dried powdered flowers and is used mainly in poultry feed to enhance the yellow colour of the meat and of the egg-yolks. It is used similarly in feed for salmon and crustaceans. Marigold extract is a solvent extract of the flowers, used mainly in western Europe as a yellow to orange food colorant, e.g. in salad dressings, ice cream, dairy products and other foodstuffs with a high fat content, but also in soft drinks, bakery products, jams and confectionery. Fresh and dry flowers can be used to dye wool, silk and cellulose fibres into shades of golden-yellow to orange and olive-green to bronze, depending on the mordanting substances used.

Tagetes erecta is popular worldwide as an ornamental, in Central America particularly in cemeteries. In Honduras, a water extract of the plants was formerly used to wash corpses because of the strong fragrance of the essential oil. Hence the Spanish common name for Tagetes erecta used throughout Mexico and Central America ‘flor de muerto’, flower of the dead. The Portuguese name ‘cravo de defuntos’, carnation of the dead, has the same origin. The whole herb is considered medicinal with anthelmintic, aromatic, digestive, diuretic, sedative and stomachic properties. It is used internally to treat indigestion, colic, severe constipation, dysentery, cough and fever, and externally to treat sores, ulcers, eczema, sore eyes and rheumatism. In East Africa its roots are eaten with oysternut (Telfairia pedata (Sm. ex Sims) Hook.) to relieve pain in the sexual organs. In Mauritius a decoction of the flowers is drunk against jaundice. Secretions from the roots have insecticidal and nematicidal effects. Sometimes Tagetes erecta is planted in crop fields as an insect repellent because of its sharp peculiar smell, although the plant itself is susceptible to insect pests. In India it is grown for its essential oil from which an ‘attar’ is produced. The oil is used in small traces in perfumery to impart floral and ‘apple’ notes. In Gabon the leaves are occasionally used as a condiment.

The major producers of Tagetes erecta are Mexico, Peru, Ecuador, Argentina and Venezuela; minor producers are India, South Africa and Zambia. Statistics on production and international trade are scarce and unreliable. Annual trade in marigold meal is many thousands of tonnes, particularly between countries in Latin America (e.g. Mexico is a large producer and importer). Peruvian export of marigold meal reached 3,000 t in the mid-to-late 1980s. Major importers of marigold meal and its extracts outside Latin America are North America and Western Europe (particularly Spain and Portugal).

Quantitatively, the colorants in Tagetes erecta flowers are mainly quercetagitrin and tagetiin, two glycosides of the flavonoid quercetagetin, giving strong, beautiful dyes for textiles, but with relatively poor light fastness. Currently most important from an economic point of view are the carotenoid components of the flowers, among which lutein (xanthophyll) amounts to 64% and sometimes up to 80%, with smaller amounts of antheraxanthin, zeaxanthin, cryptoxanthin, β-carotene and about 14 other carotenoids. Colorants from marigold are available in a variety of forms. Formulations for animal feeds usually consist of ground dried flowers, oleoresins, or saponified oleoresins. Food colorants are available e.g. as purified lutein esters in oil-soluble or water-dispersible systems, spray-dried emulsions, gum-based emulsions and emulsifier-based emulsions. They show good stability to heat, light, pH changes and sulphur dioxide. They are susceptible to oxidation, which can be minimized through encapsulation or the addition of antioxidants such as ethoxyquin, ascorbic acid, tocopherols or butylated hydroxyanisole and butylated hydroxytoluene. In the United States marigold meal and its extracts are approved only as colorants in poultry feed, but not in human foods (they have not been given FDA-GRAS status). However, admission rules for the use of tagetes extract as oil in foods for direct human consumption are currently being widened. Naturally derived lutein is classified as E161b in the European Union, but marigold extract has not been assigned an E number and is traded as ‘vegetable extract’. In the Colour Index it is listed under CI 75135. Lutein is thought to be an essential micronutrient for normal vision and it is present in high concentrations in the eye. It protects the eye by filtering the light and by its antioxidant properties. Lutein is widely available in foods, e.g. in green leafy vegetables, eggs and red peppers.

Samples of the essential oil hydrodistilled from the flowers and leaves of Tagetes erecta from Hungary were characterized by limonene, α-terpinolene, piperitone and caryophyllene; the main components of samples from India were: limonene 7%, (Z)-β-ocimene 42%, dihydrotagetone 14%, cis-tagetone 8%, cis-ocimenone 5% and trans-ocimenone 6%. The essential oil appears to be a strong fungicide. At an average concentration of 2000 ppm it is more active than many commercial fungicides such as captan and agrosan (potassium chlorate). Thiophenes and thiophene derivatives with nematicidal properties are present in the leaves and roots of Tagetes erecta and other Tagetes species. Much research is done to study the positive effects of intercropping commercial field crops with Tagetes erecta, particularly in India.

Lutein is also present in common feedstuffs such as maize and other cereals, capsicum fruits and alfalfa. However, to achieve desired egg yolk pigmentation cereal diets other than maize require additional lutein since their lutein content is highly variable. Astaxanthin is a substitute commercially derived from the yeast Paffia rhodozyma. Synthetic colorants or pigments used in poultry feed are citraxanthin, canthaxanthin, β-apo-8’-carotenoic acid and some of its derivatives. Though egg yolk pigmentation due to synthetic colorants is much more intense than with natural ones, an increase in consumer preference for natural organic products ensures a continued demand for natural sources of lutein.

Tagetes comprises about 40 species which are all indigenous to tropical America, usually occurring in mountainous regions.

Although Tagetes patula L. has been considered synonymous to Tagetes erecta in several flora accounts for tropical America, it is often distinguished as a separate species, especially when taking into account cultivated plants. However, there are no reliable characteristics to distinguish Tagetes erecta and Tagetes patula, though the former is reportedly diploid and the latter tetraploid. In cultivation numerous intermediate specimens occur.

Once established, Tagetes erecta can grow up to more than 1 m tall, although in the wild it usually reaches only 25 cm. Flowering starts about 3 months after planting and continues for several months.

The natural habitat of Tagetes erecta is the pine-oak forest zone of Mexico in a warm, low-humidity climate. In addition to being cultivated as a garden ornamental, it is often found as an escape, e.g. in the United States, where it occurs along roadsides. It needs full sun and in the tropics it occurs from sea-level up to 2000 m altitude. It grows well in well-drained loamy and clay soils of varying pH.

Propagation of Tagetes erecta is by seed. Under good conditions about 400 g/ha is required. Germination is within two weeks and usually seedlings are first transplanted into pots before being planted in single or double rows in the field at about 20 cm × 90 cm. Tagetes erecta is sometimes intercropped or grown in rotation with commercial crops to reduce diseases and nematode populations.

For commercial growth of Tagetes erecta, a fertile soil and preferably 6 hours of sun per day are needed. Weeding is necessary until the crop canopy has closed. Though it needs to be watered regularly, too much watering may cause the plant to rot. Excessive nitrogen or shade leads to the production of leafy plants with few flower heads. Phosphorus promotes flowering.

A number of diseases and pests can attack Tagetes erecta. Botrytis blight causes the flower heads to turn brown and decay, especially in wet weather; a grey mould develops on the fading flowers. A leaf spot causes oval to irregular grey to black spots on the leaflets, starting on lower leaves and progressing upwards. Although Tagetes erecta can reduce the numbers of some nematodes in the soil (especially Pratylenchus penetrans), root-knot nematodes may cause serious damage. Red spider mite is often a serious pest in Tagetes erecta cultivars, causing leaves to lose their green colour; severe infestations cover the plant with fine webbing. Slugs are a major cause of damage too.

Plants are considered mature and ready for harvesting when they have 2–3 fully developed flower heads, about 90 days after planting. The flower heads can be harvested by hand or mechanically. Harvesting by hand is done at intervals of 3–5 weeks, depending on plant vigour, until flowering finishes.

Harvested flower heads are dried directly or after silage up to about 10% moisture content. They can then be ground, packed and sold as marigold or tagetes meal. The ground flower heads can also be extracted with a solvent, hexane being preferred. After removal of the solvent a brown oleoresin is obtained, which can be incorporated directly into poultry feed. The resin can be further purified by saponification with 40% potassium hydroxide or an equivalent alkali solution. After removal of the solvent and adjustment of the pH to 6–8, the product can be washed and sold as saponified marigold extract. It can be further purified by washing and taken up in a suitable vegetable oil or absorbed on e.g. calcium silicate, gelatin and starch to produce a dry powder suitable for use as a food colorant. The final product usually contains 10–20% by weight of the original lutein esters. An alternative extraction method has been developed that eliminates the wasteful silage process. It involves adding enzymes (e.g. ‘Viscozyme’) that dissolve the cell walls of ground fresh flower heads. Further addition of proteolytic (e.g. ‘Neutrase’) or pectolytic (e.g. ‘Pectinex’) enzymes increases the yield of the subsequent hexane extraction to over 95%.

As a commonly grown plant, Tagetes erecta is widespread and not in danger of genetic erosion. Small collections of germplasm are maintained, e.g. at the Mendel Agricultural and Forestry University, Lednice, Czech Republic.

Numerous cultivars have been made in Tagetes erecta, almost all for their ornamental value, differing in flower colour, flowerhead size and plant height. Breeding programmes to obtain cultivars with a higher lutein content in the flowers exist in India.

Tagetes erecta is exploited for use as a colorant source in poultry farming and human food. Its cultivation for export for these purposes takes place currently mainly in Mexico and Peru. The expansion of its cultivation to African countries (existing already on a small scale in Zambia and South Africa) might bring an additional source of income to peasant farmers. Tagetes erecta can be grown in variable environments and its adoption as a commercial crop seems quite possible in many regions of Africa. World demand depends on developments in its approval as a food colorant and on quality/price competitiveness with other natural lutein sources.