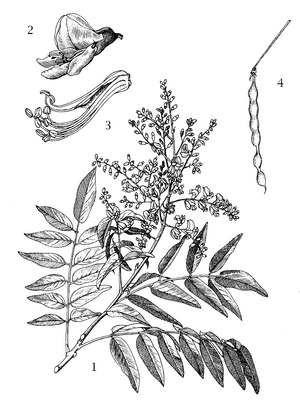 S. japonicum is native to central and northern China and Korea, but now widely cultivated in temperate and subtropical regions of the world, and rarely in highlands in the tropics, in South-East Asia at least in Vietnam and Thailand.

The flower buds of S. japonicum are astringent and possess styptic properties. They are a reputed remedy for the prevention of various types of haemorrhages (e.g. haemoptysis, epistaxis, metrorrhagia), haemorrhoids, and are useful for the treatment of hypertension. Flower buds and young pods are an important source of rutin, which has "vitamin P"-like properties and is used in the treatment of conditions characterized by increased capillary permeability and fragility. An extract from the pods is toxic. S. japonicum is also reputed to show oestrogenic activity.

In temperate and subtropical regions the Japanese pagoda tree is commonly cultivated as an ornamental in gardens and parks, and as a road-side tree. Its tough and durable wood is used for door and window frames and agricultural implements. The shoots seem to be a suitable fodder, but as the pods are poisonous they should be given with care. In China, an extract of the leaves and pods is used to adulterate opium. A gum similar to that from carob (Ceratonia siliqua L.) can be extracted from the seeds.

The flower buds can be used for dyeing yellow or a beautiful granite-grey. The pods are rarely used for this purpose. In China and Vietnam this dye was only used to colour silk, embroidery thread and hat tassels, but not for other materials because of the many flower buds needed to prepare a dye-bath. Mixed with indigo, the dye gives a green colour. In Java, dried flower buds were imported from China for the batik industry. In the fine "soga-batik" process they were used in the last fixing and colouring bath after the real colouring process, in a mixture together with rice flour, camphor, lime juice, sugar and water. Nowadays much cheaper synthetic dyes are used instead.

The seeds and pods of S. japonicum contain various haemagglutinins (lectins). This probably explains the toxic effect of intravenous administration of a seed or pod extract. The lectin fraction, called S. japonicum agglutinin (SJA) can furthermore be separated into two more subfractions; a D-galactose/N-acetyl-D-galactosamine specific lectin (B-SJA-I) and a D-mannose/D-glucose specific lectin (B-SJA-II). In agglutination experiments, S. japonicum agglutinin (SJA) demonstrated blood group specificity for the B-group human erythrocytes. Binding experiments with frozen sections of human kidneys also showed specific binding to the endothelia in specimens from blood groups B or AB, thus indicating a D-galactose/N-acetyl-D-galactosamine receptor specificity. Furthermore, the S. japonicum agglutinin appears to be devoid of mitogenic and immuno-suppressive activity, in contrast to, for example, concanavalin A, which suppresses the T helper-dependent antibody response to sheep erythrocytes.

The flavonoid-glycoside rutin (also known as rutoside, quercetin-3-rutinoside or 3,3',4',5,7-pentahydroxyflavone-3-rutinoside) is found in high concentrations in the flower buds. Known as a "capillary protectant", the substance is used to treat capillary and venous disorders. Alone, or in combination with other drugs it is a common ingredient of vascular protective agents and venous tonics, and of topical agents in phlebology. Evidence of its value, however, still remains somewhat inconclusive.

Using an activity-guided procedure, an anti-haemostatic principle in the flower buds has been identified as the flavonoid isorhamnetin-(2-(3-methoxy-4-hydroxyphenyl)-3,5,7-trihydroxy-4H-1-benzopyran-4-one).

HPLC analysis of commercially available samples of S. japonicum in Taiwan revealed the presence of the flavonoids rutin, quercetin, sophoricoside, sophorabioside and genistein. Flower buds contained a great deal of rutin, while the immature fruits contained sophoricoside and sophorabioside. When flower buds were stir-fried for short periods over low heat, the extracted rate of rutin and quercetin increased slightly, decreasing with longer cooking periods at higher temperatures. When stir-fried with vinegar, flower buds quickly blackened, but when cooked with honey, they changed very little. Immature fruits, however, exhibit less variation in their active constituents after processing. All processed samples of S. japonicum have a pronounced aroma and could be more easily extracted with water than the unprocessed samples.

In a detailed study in Egypt on flavonoid contents of the various plant parts no qualitative changes were observed in the different development stages of leaves or flowers. The number and diversity of flavonoids gradually increase during transformation from flower to fruit. Sophorabioside, sophora-flavanoloside and genistein glucoside appeared at the beginning of fruit formation, while sophoricoside appeared only at maturity. The total rutin concentration was highest in flower buds (24%). The rutin content in leaves decreases from young to mature leaves.

An intragastrically administered aqueous extract of the flower buds showed strong anti-ulcer activity against ulcerations in rats induced by ethanol HCl. The mutagenic potential of a crude, freeze-dried hot-water extract was evaluated using the Ames test, and the micronucleus and chromosomal aberration assays in mice in vivo. S. japonicum (± S9) was found to significantly induce His+-revertants in Salmonella typhimurium TA 98 and/or TA 100 strains. The extract was furthermore found positive in both in vivo assays.

Leaves contain 18.2% crude protein based on dry weight. The wet fractionation process was applied to twigs, leaves and pods. The leaf-protein concentrate obtained from the green juice after pressing contained 16% crude protein, which is very low and 69% total lipids, which is very high; both values were determined on a dry matter basis. Seeds contain 9.9% fatty oil which is rich in linoleic acid (52.8%), but is poor in drying properties. The seed-cake contains 30% protein, but glycosides should be removed before using it as fodder.

Other sources for industrial extraction of rutin are the leaves of Fagopyrum esculentum Moench, a cereal especially from temperate zones, and the leaves of some Eucalyptus species e.g. E. macrorhyncha F. v. Mueller ex Benth. from Australia.

Seeds of S. japonicum germinate quickly, usually within about 4 days. The tree starts flowering when about 3-4 years old, though sometimes only when about 30 years old. In Vietnam, trees flower from May to August and fruit from September to November. In China, flowering is in August-September, fruiting in October-November.

Styphnolobium is a small genus of 9 species occurring in North and Central America, with S. japonicum as the only Asian representative. The segregation of Styphnolobium from the closely related genus Sophora is supported by morphological characters (flowers with bracteoles, pods indehiscent), a different somatic chromosome number and the results of DNA studies. The DNA studies even indicate that the two genera are not closely related. Several varieties have been distinguished within S. japonicum, the status of which is still unclear, and several cultivars are grown as ornamentals.

S. japonicum is well adapted to dry weather conditions and to a great variety of soils, but thrives best in well-drained, sandy loam. Being native in temperate and subtropical regions, cultivation in the tropics is only possible in drier regions or at higher altitudes. Under temperate conditions S. japonicum is tolerant of heat and drought, whereas it also tolerates severe frost (up to -25 °C) except when young.

S. japonicum can be propagated by seed, which should be scarified or treated with hot water and soaked before sowing. Under temperate conditions the seed germinates well and within a few days. Grafting, layering, greenwood and root cuttings are used for ornamental cultivars. Trees can be coppiced successfully.

Among the reported diseases and pests of S. japonicum are fungi such as Uromyces truncicola which cause a canker disease in seedlings, and leafminers such as Odontota dorsalis, and aphids (Aphis spp.).

Flower buds, inflorescences and young fruits of S. japonicum are hand picked. Inflorescences are harvested when flowers begin to open. Young stems can simply be cut as routine under coppice management.

After harvesting, the inflorescences of S. japonicum are dried, and rachises and pedicels discarded. Rutin is extracted by subsequent boiling in water and crystallization upon cooling, followed by recrystallization from ethanol.

S. japonicum is an important industrial source of rutin. Research in further applications in the treatment of capillary and venous disorders deserves more attention.

Japanese pagoda tree is rarely used for dyeing nowadays. The labour required to collect enough flower buds to prepare a dye bath makes the product very expensive, and comparatively cheap synthetic dyes have taken over the place of the natural dye. The dye gives beautiful colours and was important in traditional handwork in several countries. Knowledge of this dye plant should be saved for the future, when a new interest in traditional dyes may develop.

Japanese pagoda tree has been advocated as a very suitable fuel tree because of its adaptability to various climates (even to dry climates) and to a great variety of soils, and also because it is capable of regrowth from stumps. However, its possibilities are limited in the tropics because of its ecological requirements.