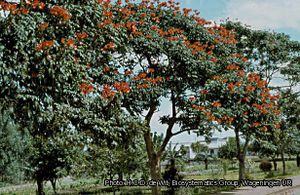 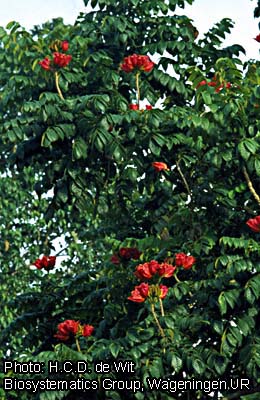 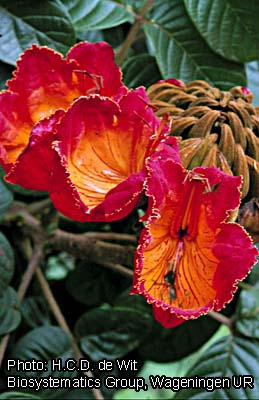 close up of flowers 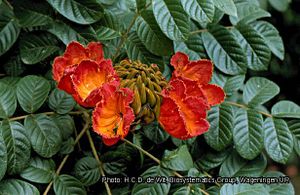 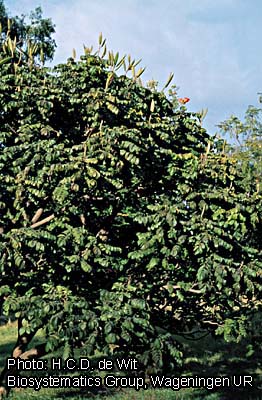 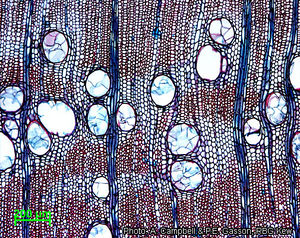 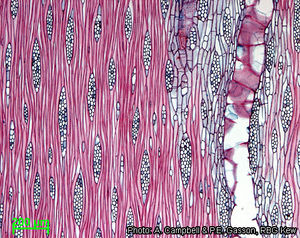 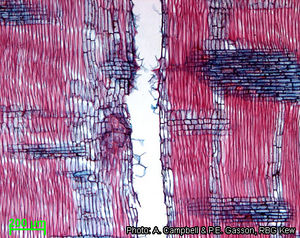 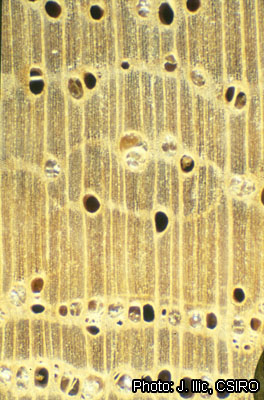 African tulip tree is native of West and Central Africa, and western East Africa, from southern Senegal east to western Kenya and Tanzania, and south to northern Angola and southern Democratic Republic of Congo. Elsewhere in tropical Africa it is planted as an ornamental, e.g. in Cape Verde, Zimbabwe and Madagascar. African tulip tree is widely grown in tropical and subtropical regions outside Africa. It has become naturalized and is an important component of secondary vegetation, e.g. in Mexico and Puerto Rico, and is considered a weed in Guam and Hawaii.

African tulip tree is planted as an ornamental, a wayside tree and shade tree. It is used for soil improvement, reafforestation, erosion control and land rehabilitation, and as a live fence. Its dense crown does not allow intercropping, but its leaves make a useful mulch. It has been used as a shade tree in coffee plantations. In teak plantations, African tulip tree can be used to attract initial populations of teak defoliator (Hyblaea puera), which can then easily be destroyed.

Spathodea campanulata has many medicinal uses both where it is native and introduced. Extracts of bark, leaves and flowers are used to treat malaria, HIV, diabetes mellitus, oedema, dysentery, constipation, gastrointestinal disorders, ulcers, skin diseases, wounds, fever, urethral inflammation, liver complaints and as a poison antidote. It may be effective as a malaria prophylactic and in the control of Aedes mosquitoes.

In West Africa, the wood is used for carving, but considered inferior for other purposes. In Ethiopia, it is used as firewood and to produce charcoal. Plywood seems the only widespread commercial use for the timber, traded as African tulip (En) or tulipier (Fr); African tulip tree is grown as a plantation crop for this purpose in the Philippines. The seeds are eaten in many parts of Africa. The flower buds contain a reddish sap, and are used as water pistols by children.

Medical research has concentrated on the effects of Spathodea campanulata on diabetes, malaria and schistosomiasis. A decoction of stem bark showed hypoglycaemic activity in mice, but had no influence on insulin levels. In tests on Plasmodium berghei berghei in mice, the hexane and chloroform extracts of stem bark showed blood schizontocidal action, and the chloroform extract demonstrated some prophylactic properties. The extracts not only suppressed parasitaemia but also prolonged the lifespan of mice. An aqueous alcoholic extract of the leaves also showed some antimalarial properties.

Extracts have been tried as a molluscicide; several of these proved effective against Biomphalaria glabrata in Brazil, but in Swaziland they were the least effective of all extracts tested against Bulinus africanus, the schistosomiasis (bilharzia) vector. As a fungicide they had little effect on damping-off caused by Pythium aphanidermatum, but they were effective against bean rust caused by Uromyces appendiculatus. The extracts showed larvicidal properties against the mosquito Aedes fluviatilis, a vector of Rift Valley fever.

Of the many compounds isolated from the wood, bark and leaves the most promising are ursolic acid and its derivatives, which are believed to play a role in the antimalarial activity of the bark extract.

The wood is dirty white, very light (air-dry density ca. 360 kg/m³), soft and fibrous. It is liable to rot. It is a poor timber and firewood, although occasionally used as such.

Spathodea comprises only a single species, with 3 subspecies distinguished by their hairiness. Subsp. campanulata has glabrous leaves and ovary, a minutely velvety calyx, and is restricted to West African lowland forest. Subsp. nilotica (Seem.) Bidgood has densely hairy leaves and ovary, a densely velvety calyx, and is found in Central and East African lower montane forest. Subsp. congolana Bidgood, of the lowland forest in the Congo Basin, has leaves with scattered long curly hairs and a glabrous to curly hairy calyx and ovary. Some introgression between subspecies has been reported.

Growth of the bole may be up to 5 cm/year in diameter. Flowering may start 2–3 years after planting. The flowers are individually short-lived but carried in succession over long periods. Under favourable conditions, African tulip tree may flower throughout the year. In areas with a pronounced dry season (e.g. Kenya) or cold season (e.g. southern United States, Spain) the trees are deciduous and have a marked peak in flowering. High temperatures during flowering interfere with pollen development and fertilization. The seeds are wind-dispersed. Coppice growth is reported to be excellent; trees will coppice up to at least pole size.

African tulip tree occurs naturally in forest fringes, riverine forest, secondary scrub, wooded savanna and open savanna, up to 2000 m altitude and in areas receiving 1300–2000 mm annual rainfall. In secondary forest, few juvenile trees are found as the species is not shade tolerant. It prefers warm, moist conditions but on deep soil it withstands drought. African tulip tree is frost tender when young. It does not produce seed at high temperatures or low relative humidity.

Propagation is mostly by seed. Seeds do not require treatment; they are recalcitrant and their viability is short. One kg contains about 125,000 seeds.

Cuttings can also be used for propagation, larger diameter cuttings (up to 10 cm) giving the best results. Saddle and side grafting are sometimes used to multiply desirable ornamental forms, such as those with yellow flowers, with higher success rates for side grafting (75% vs. 25%). However, saddle-grafted plants have better growth. Root suckers can also be used for propagation.

The wood is soft and brittle, so planting should only take place where falling branches will not cause damage.

African tulip tree is affected by leaf blister in Kenya and is susceptible to butt and heart rot. Fungal diseases (Diplodia and Corynespora species) attack 1–2 year old seedlings in Cuba. African tulip tree is a host of the fungus Ceratocystis fimbriata and Xyleborus beetles in Cuba, and of gypsy moth (Lymantria dispar) and the coreid bug Leptoglossus zonatus (pest of corn, soybean, sorghum, cotton) in Brazil. Other insect pests include teak defoliator (Hyblaea puera) in India and a leafhopper (Rabela tabebuiae) in Florida.

The Subtropical Horticultural Research Unit, Miami, United States has a germplasm collection of 16 accessions. Seed is available commercially from many sources. An orange to buttercup-yellow form of the species, originally from Uganda, is popular in horticulture. It is multiplied vegetatively.

African tulip tree will remain important as a park and street tree, valued for its shade and spectacular flowers. Its use in agriculture and forestry and as a medicinal plant deserves more attention. It also has potential for greater use in rehabilitating disturbed lands on account of its pioneering ability and rapid growth.