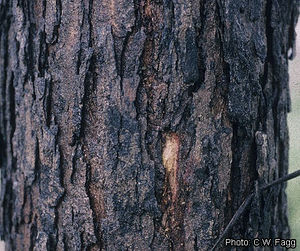 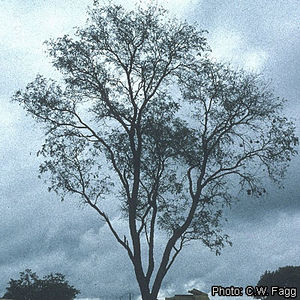 Acacia caffra is found mostly in northern and eastern South Africa and Swaziland, but occurs also in southern Botswana and southern Mozambique. It is found in small numbers near Harare in Zimbabwe, probably the result of an introduction long ago. It is planted in India.

The wood is used for fence poles and occasionally for furniture. The Xhosa people of South Africa used it for making traditional smoking pipes, and it also serves as firewood. The bark is used for tanning; it produces pale brown leather. Baskets are made from the twigs. A leaf decoction with milk is used by the Zulu people of South Africa as an enema to treat abdominal complaints in children; the leaves are sometimes chewed for the same purpose. A leaf decoction is also drunk to treat colds and fever. A bark infusion is administered as a blood purifier. Leaves and pods are eaten by livestock, but may cause poisoning.

The heartwood is dark brown and distinctly demarcated from the creamy sapwood. The texture is moderately fine to moderately coarse. The wood is heavy and hard. The density is 980–1060 kg/m³ at 12% moisture content. The wood seasons without serious defects.

A number of proteracacinidins (proanthocyanidins) have been isolated from the heartwood, and several cyanogenic glycosides from the leaves.

Acacia is a large pantropical genus, comprising more than 1300 species; most of them are distributed in Australia (more than 900), more than 200 in America, and about 130 in Africa. Acacia caffra belongs to subgenus Aculeiferum , which comprises all African Acacia species with non-spinescent stipules and hooked prickles. Acacia caffra is variable, especially in its indumentum, number of pinnae per leaf and leaflet size. It is sometimes confused with Acacia ataxacantha DC. and Acacia hereroensis Engl., the first of which has scattered prickles and the second smaller leaves and shorter petioles.

The seeds are probably dispersed by large herbivores such as elephants and antelopes and by baboons, all of which eat the pods.

Acacia caffra occurs in open woodland, wooded grassland and on dry rocky hills, often along watercourses, up to 1500 m altitude.

Although Acacia caffra is only found in the most southern parts of Botswana and Mozambique, it is widespread in South Africa and occurs there in a variety of habitats. Therefore, it is unlikely to be under threat of genetic erosion.

Acacia caffra will remain only locally important as timber tree, but it has potential as a fast-growing and attractive ornamental which is drought- and frost-resistant.