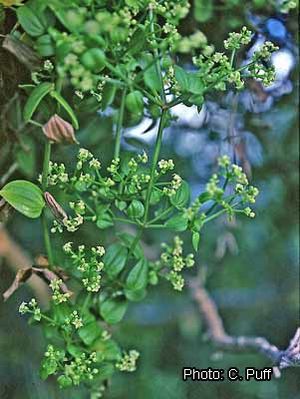 Rubia cordifolia has an extremely large area of distribution, ranging from Africa to tropical Asia, China, Japan and Australia. In Africa it is found from Sudan and Ethiopia to South Africa.

Rubia cordifolia has been and still is widely used as a dye plant in Asia. In Africa it appears to have been less important as a dye. Its use is only documented in South Africa, where the roots are used to dye wool, and in Ethiopia, where they serve to dye wool and bread baskets into various shades of red, pink, purple or maroon. The roots are an important ingredient in recipes of red inks that may also contain other red dye-plants such as the roots of Impatiens tinctoria A.Rich. and the bark of Osyris quadripartita Salzm. ex Decne. The juice of crushed fruits is bottled and used as green to bluish ink. Reports from Asian countries (particularly northern India, Bhutan, Nepal, Tibet, China and Japan) show that a red dye extracted from the stems and roots has long been used to dye silk, linen and cotton fabrics (chintz), and wool (blankets and carpets). The red colorants present, though slightly different in chemical composition, give dyes quite similar in hues and fastness to those produced by Rubia tinctorum L., the European madder plant. To dye a piece of cloth, it is simmered in a decoction of the root and sometimes of the lower part of the stem in water, after having previously been mordanted with alum and (for chintz) with fatty and tannin mordants. Several synthetic dyes have now largely replaced Indian madder as a source of red dye for industrial production in Asia, but it is still used for high-quality traditional textiles.

In Tanzania ash of burnt stems and leaves is used as vegetable salt to soften vegetables when cooking. Rubia cordifolia is widely used in African traditional medicine. In Uganda and Tanzania the leaves are used as a poison antidote and to treat mouth sores and intestinal problems such as diarrhoea; a drink prepared from crushed and boiled leaves is administered to patients. Roots are credited with astringent and antidysenteric properties. In South Africa the root is used to treat impotence and as an aphrodisiac. In Tanzania and Kenya a wound dressing (‘kiraara’) is made by rubbing the leaves between the hand palms into a ball, which is then applied to a wound or cut to stop bleeding and as an antiseptic. A root decoction is used as an emetic in cases of stomach problems. In Rwanda a root decoction is used to treat women who experience weight loss during pregnancy (‘ifumbi’), urethral leak, giddiness, tingling sensations and kidney problems. In DR Congo the leaves are burnt and the ashes are used to treat inflammation of the mammary glands (mastitis) in cattle and also to treat itchy skin in humans. In Burundi a leaf decoction is administered to newly born calves with haemorrhagic diarrhoea (‘amacikire’) and also to treat external parasites such as fleas, ticks and mites in animals. In Ethiopia the leaves are used to treat malaria, itches and to stop bleeding, the roots to treat amoebic dysentery, cancer and cough. The leaves are eaten in Indonesia as a side dish with rice, and fresh fruits are edible. Rubia cordifolia can be used as an ornamental climber, but in cultivated fields it can behave as a troublesome weed.

Rubia cordifolia does not appear to have been much cultivated, but was and still is mostly collected from the wild. At present, production and trade for its dye is almost confined to northern India and surrounding countries. In the past, starting at the end of the 18th century, roots were exported to the United Kingdom. Nowadays, powdered Indian madder for dyeing is exported e.g. to Europe, North America and Japan in small amounts that are difficult to quantify. In Africa Rubia cordifolia is only occasionally traded on local markets for use in traditional medicine.

Rubia cordifolia and other Rubia species are currently sold together as ‘madder’. Rubia cordifolia should not be confused with Oldenlandia umbellata L., also called Indian madder and found in eastern India, Myanmar and Sri Lanka but not in Africa, which contains alizarin as red dye component.

Rubia comprises about 60 species and is distributed in Europe, Africa and Asia, with 3 species in tropical Africa. It is closely related to Galium.

The name Rubia cordifolia L. is applied to a vast range of plants distributed all over Africa and Asia. Attempts to split the extremely variable Rubia cordifolia into several taxa have failed, and much experimental taxonomic work would be needed to unravel the systematics of this species and its allies. All African material is currently included in subsp. conotricha (Gand.) Verdc. (synonym: Rubia conotricha Gand.), which is also variable, varying mostly in shape, size and hairiness of the leaf and length of the petiole. In Eritrea, Ethiopia and Somalia the plants have the lower side of the leaves densely covered with white hairs and the corollas are distinctly campanulate. They have been distinguished as var. discolor (Turcz.) K.Schum. (synonym: Rubia discolor Turcz.). The 2 other species in Africa, Rubia petiolaris DC. and Rubia horrida (Thunb.) Puff, are confined to southern Africa and differ from Rubia cordifolia by having leaves arranged in whorls of 6–8(–12) instead of whorls of 4. Rubia petiolaris has been recorded from South Africa and Lesotho and Rubia horrida from Zimbabwe, South Africa, Botswana and Namibia.

Rubia cordifolia has a wide ecological adaptability. It is found in forest edges and clearings, scrub vegetation and dune forest, less commonly in grassland or open, rocky areas, from sea-level up to 2600 m altitude.

Rubia cordifolia is occasionally cultivated in India (Darjeeling). It can be propagated by seed, cuttings and micropropagation methods. Seed germinates best when sown immediately after ripening; stored seed takes time to germinate. Plants should be grown in light shade.

In Africa the roots and stems are harvested exclusively from the wild. They are either used fresh and crushed, or dried and then ground to powder. To prepare the dye bath for wool or basket fibres, water is added to the crushed or ground roots and left to simmer for two hours, then the material to by dyed (pre-mordanted with alum, in the case of wool) is added to the dye-bath. It is allowed to simmer for another hour and left to cool down in the bath before washing and drying.

Rubia cordifolia is widely distributed in secondary and disturbed habitats and is unlikely to be liable to genetic erosion. Its extreme variability requires more attention.

Rubia cordifolia has at present lost much of its former importance as a dye-producing plant, but since it produces a great range of beautiful, fast colours and is easy to propagate, the current growing interest in natural dyes as renewable resources may make it a useful crop. Its effectiveness in disease treatments deserves more research and is being investigated in India where the plant was used in the Ayurvedic and Unani systems of medicine, besides being part of an anticancer compound in Tibetan medicine.