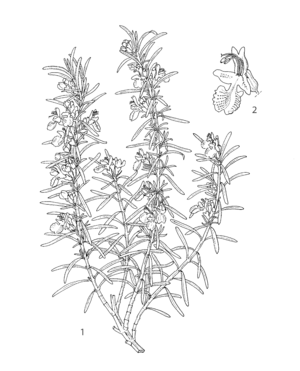 Rosemary is indigenous to the Mediterranean region, from where it was introduced into all continents. It is occasionally cultivated as an ornamental in the mountainous areas of Java. In the Philippines it is currently grown on a small scale for the fresh-herb market.

Rosemary oil, distilled from the flowering tops and leaves, is used to season processed foods, but for the most part it is employed in perfumes, in scenting soaps, detergents, household sprays and other related technical products. It finds application in denaturing alcohol and is popular in aromatherapy. In the United States the regulatory status "generally recognized as safe” has been accorded to rosemary (GRAS 2991), rosemary oil (GRAS 2992) and rosemary oleoresin (GRAS 3001). The maximum permitted level of rosemary oil in food products is about 0.003%. Rosemary oleoresin is used in the food industry as a natural antioxidant, for instance in cooked meat products.

In traditional medicine rosemary is thought to fortify the brain and refresh the memory. Flowering tops and leaves are considered carminative, diaphoretic, diuretic, aperient, emmenagogue, stimulant, stomachic and astringent. Rosemary also serves as a household remedy for headaches, bruises, colds, nervous tension, asthma, baldness and sore throat. In the Philippines, an infusion of the leaves is used as an eyewash for slight catarrhal conjunctivitis, as vapour baths for rheumatism, paralysis and incipient catarrhs, and to bathe women in puerperal state. Rosemary leaves are therapeutically allowed internally for dyspeptic complaints, and externally for rheumatic diseases and circulatory problems.

Rosemary is very popular as an ornamental plant used as a ground cover, hedge or shrub and is even transformed by hobbyists into bonsai or planted in hanging baskets. The leaves and flowers can be carefully dried and sold in elegant sachets and potpourris. For the last 1000 years in Europe, rosemary has been a symbol of happiness, fidelity and love, and a wedding and funeral flower.

Data on world trade of dried rosemary are fragmentary and available only for selected markets. In the 1970s annual consumption of rosemary in the major markets of Europe, the United States and Japan was estimated at 490-710 t. In 1989-1990 import of rosemary in selected countries of Western Europe (France, Germany, United Kingdom, the Netherlands) totalled 970-1020 t. The bulk of this import came from Spain and the rest from Albania, Tunisia and Morocco.

Rosemary oil, which is used in large amounts in the food-processing industry, is produced mainly in Spain, Tunisia and Morocco. Annual world production of the oil is about 375-425 t and is consumed mostly in the United States and the European Union. The value of world production of rosemary oil is estimated at US$ 5 million. From 1992-1995 the biggest user of rosemary oil, the United States, imported annually about 60 t, valued at US$ 0.9 million.

The dried leaves contain 1-2% volatile oil. Verbenone is the character-impact compound in rosemary; the pungent, camphoraceous odour and burning taste is attributed to borneol; the cooling and minty note to camphor; the fresh aroma to cineole; and the warm, piny scent to α-pinene. The phenols thymol, carvacrol and eugenol also play an important role in the flavouring properties of the oil. A monograph on the physiological properties of rosemary oil has been published by the Research Institute for Fragrance Materials (RIFM).

Rosemary possesses strong antioxidant properties. Carnosic acid, the major phenolic diterpene present in the leaves, has been found to be several times more effective than the commercial food preservatives butylated hydroxyanisole (BHA) and butylated hydroxytoluene (BHT) in controlling oxidation in soya-bean oil. Rosemary also possesses some antibacterial and antifungal properties. Extracts of the plant have been found to inhibit skin tumorigenesis in test animals. The volatile oil of rosemary has been reported to induce hyperglycemia and to inhibit insulin release in test rabbits.

Three types of rosemary oil are sometimes recognized: a camphor type (produced mainly in Spain), a 1,8-cineole type (produced mainly in Morocco) and a verbenone + bornyl acetate type that is a cottage-industry product from Corsica. In herbal medicine rosemary oil is used to treat acute middle ear infections and to stimulate liver and gall bladder. It is said to be very beneficial for dry skin in skin-care products. Verbenone is also an insect pheromone. Synthetic verbenone is used in programmes to control several bark beetle species in pine trees.

Rosemary is an excellent source of nectar for honeybees.

Rosemary oil has in the past been adulterated with turpentine, oil of pine, certain fractions of camphor oil (i.e. camphor) and eucalyptus oil (i.e. 1,8-cineole).

Seeds of rosemary are slow to germinate taking about 3-4 weeks before emerging from the soil. To enhance germination the temperature should remain below 18°C. Seedlings are likewise slow to develop, becoming a dense shrub with a diameter of 60 cm and a height of 90 cm only by the end of the second growing season. Flowering is initiated when plants are 2 or more years old. Under favourable growing conditions and optimal cultural management, rosemary can remain productive for up to 30 years.

Rosemary is very variable in habit (erect to creeping), size and colour of leaves and flowers and composition of the essential oil. This variability has led to recognition of 4 species by some; others distinguish 1 species with many varieties and forms. Most appropriate for cultivated plants is to distinguish cultivar groups and cultivars.

Some of the notable cultivars of rosemary are "Albus” (with white flowers), "Collingwood Ingram” (0.6-0.9 m tall, spreads to about 1.2 m or more, and can be used as a tall ground cover), "Tuscan Blue” (with dark blue-violet flowers), "Lockwood de Forest” and "Prostratus” (both are low-growing and make excellent ground covers, "Prostratus” is rich in verbenone).

The ecological amplitude of rosemary is from the temperate humid zone (mean annual temperature of 6-12°C; mean annual rainfall of 1000-2000 mm) to the subtropical semi-arid to humid zones (18-24°C; 500-2000 mm). Its pH tolerance ranges from 4.5-8.3, but preferably 6-7.5. In the Mediterranean region, rosemary thrives on calcareous soils, on dry sunny mountain slopes and near the coast where it is frequently exposed to fog and salt spray (Rosmarinus means "dew of the sea”). Rosemary can survive in areas with mild winters, but not in localities where the temperature frequently falls below -3°C. Once established rosemary roots deeply and is drought-resistant.

Rosemary is commonly propagated by cuttings, division or by air layering. Seeds are sometimes used, but they are produced only under very favourable growing conditions and often only 10-20% of the seeds germinate. Transplanting to the field is done at a spacing of 45 cm between plants in rows 1.2 m apart. It is also common to produce rosemary in containers in greenhouses.

Experimental production of rosmarinic acid, a caffeoyl derivative with potent antioxidant properties, has been reported in suspension cultures of rosemary.

Rosemary will benefit from balanced fertilizer applications, with K being particularly critical for high essential-oil yield. In cold areas, the crop should be given heavy mulching to prevent winter injury. It should only be moderately watered to prevent root rot.

Growth of rosemary raised in containers strongly depends on the type of growing medium and the fertilizer regime used. The use of peat and perlite as growing medium results in taller plants yielding higher amounts of essential oil compared with those raised in a medium of peat, perlite and soil. Plant fresh weight, however, is not affected. Growth in both media is also satisfactory when plants are provided with an adequate supply of controlled-release or liquid fertilizers.

Rosemary has been reported to be attacked by Phytocoris rosmarini and Orthotylus ribesi in Spain and by Sclerotinia sclerotiorum in India. It has also been found susceptible to the root-knot nematode Meloidogyne incognita.

Once established, but before rosemary becomes woody, the terminal shoots (25-30 cm from the tip) are harvested once or twice each season. The shoots are either dried or, if for sale in the fresh-herb market, bundled together in bunches of 8-12, tied with rubber bands. When the essential oil is to be extracted the plants are cut 2-3 years after planting at the onset of flowering, when the oil content is at its maximum.

Yields of fresh leaves of rosemary amount to 3 t/ha, and with a content of 0.1%, essential-oil yield is approximately 3 kg/ha.

Bunched fresh shoots of rosemary are put in styrofoam containers and delivered as soon as possible to fresh-market outlets. The whole fresh leaves can be frozen, preserving the flavour best. For the dried herb market, the shoots should be dried immediately on screen trays in a dark, sheltered area with good ventilation. The dried leaves are simply stripped by hand from the stems and subsequently stored in closed containers.

Rosemary germplasm collections are available in most Mediterranean countries, e.g. at the Portuguese Germplasm Bank, Braga, Portugal (20 accessions) and at the gene bank of the Institute for Plant Genetics and Crop Plant Research, Gatersleben, Germany (4 accessions).

In North America it is being attemped to obtain frost-tolerant rosemary cultivars. In some places "Arp” and "Hill Hardy”, 2 cold-tolerant cultivars, survive severe winters (with protection of mulch) and in others they do not.

The supply of rosemary is adequate and it is one of the least expensive herbs in the spice trade. Thus, new producers may find it difficult to penetrate the current market.

Swahn, J.O., 1991. The lore of spices. Their history and uses around the world. Crescent Books, New York, United States. p. 85. Redrawn and adapted by P. Verheij-Hayes.