distribution in Africa (wild and naturalized) 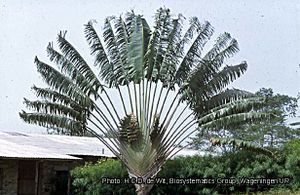 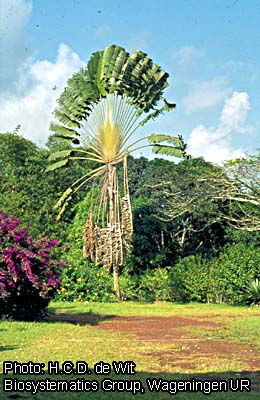 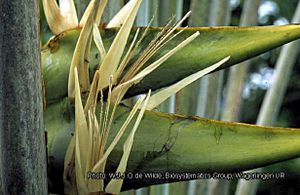 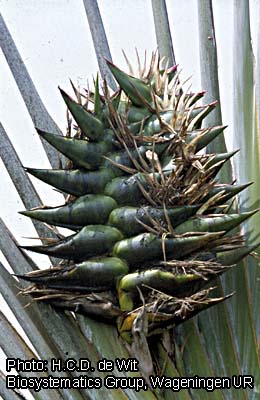 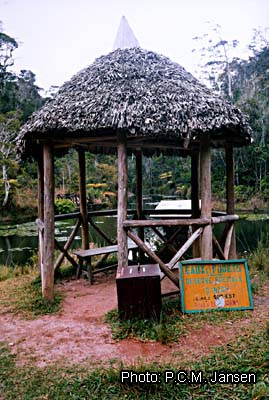 thatch made of leaves

Traveller’s palm is endemic to Madagascar, and naturalized in the Mascarene Islands. It is widely planted as an ornamental tree throughout the tropics.

The traveller’s palm is very commonly planted for ornamental purposes. The leaves are arranged into 2 rows, giving the impression of a gigantic fan. The vernacular names are an indication of the alleged use by travellers, who are said to have drunk rain water accumulated in the basal cup of the petiole and in the flower bracts. However, this water is often rendered undrinkable by infestation with mosquito larvae and contamination by detritus.

Ravenala madagascariensis is economically important locally along the east coast of Madagascar, where the leaves are used for roofing, the petioles for walls and the bark for floors in houses. In parts of India, the stem is used in house construction, the leaves for packing material and for roofing, and the midribs and petioles for hut walls.

The oil content of the seeds and arils is 4% and 68%, respectively. The oils have a fatty acid composition intermediate between palm oil and cocoa butter (oleic acid 39% and palmitic acid 34–42%) and form a possible minor source of vegetable butter. Analysis of the sterol fraction of the seed oil revealed 7 sterols, mainly β-sitosterol (65%), whereas 12 sterols have been isolated from the aril oil, mainly stigmasterol (18%), 24-methyl-5α-cholest-7-en-3-β-ol (16%), α-spinasterol (28%) and Δ-7-avenasterol (19%).

The monotypic Ravenala is one of 3 genera in the Strelitziaceae, the others being the monotypic Phenakospermum from the swamps of South America and Strelitzia with 5 species from southern Africa. Strelitziaceae is closely related to Musaceae, Heliconiaceae and Lowiaceae.

In eastern Madagascar, 4 forms of Ravenala madagascariensis have been observed on the slopes of the hills, from sea-level up to 1000 m altitude. The first form, locally called ‘malama’, is rather rare and grows in the understorey of undisturbed submontane rain forest. The juvenile phase is characterized by a secondarily spiral arrangement of the leaves, a long-decurrent leaf blade, the absence of a petiole, and the arrangement of the leaves to form a torus; the adult phase has a fan-like crown. The second form, ‘hiranirana’, is more abundant in forest gaps and disturbed primary forest, and the juvenile phase is more similar to the usual fan-like form, with well-developed petioles and a relatively wide leaf blade, and a slight and regularly alternate arrangement of the leaves, persisting in the adult phase. The third form, ‘bemavo’ is the most common form, growing on deforested slopes between 300–600 m altitude, and forming Ravenala forests; all phases show a fan-like crown. This form is mostly used for construction purposes. The fourth form, ‘horonorona’ grows in deforested lowland sites, on either poorly or well-drained soils, and is different from the other 3 in that it stays rather small and develops many suckers. It is the form that is most commonly cultivated.

The leaves at the base of a new shoot often consist often only of sheaths. Each new leaf grows up inside the sheath of the preceding one, the blade being tightly rolled. A fully expanded leaf is often slightly unequal-sided, or the base of the blade is asymmetrical. It takes up to 10 years before first flowering, but because traveller’s palm is planted for its foliage this does not distract from its ornamental value.

Every 2–3 days, a new flower opens in an inflorescence, the total number of open flowers being variable; up to 29 have been counted. The flowers normally open at night. Nectar production is copious, with maximum production at midnight. In Madagascar, traveller’s palm is pollinated predominantly by several lemur species, e.g. the ruffled lemur (Varecia variegata) and the black lemur (Eulemur macaco). Lemurs appear to be highly dependent on the nectar of traveller’s palm during specific times of the year. In areas outside the natural range, flowers are often visited by large bats, such as Pteropus alecto gouldii and Macroglossus lagochilus, as well as honeyeater birds (Megaphagidae) in Australia. The 2 abaxial petals are linked by interlocking papillae to form a tube around the anthers. At anthesis, they separate with an explosion that sheds the pollen onto a potential pollinator. Autogamy treatments revealed that Ravenala madagascariensis is a facultative self-fertilizer.

Traveller’s palm prefers sheltered, warm and humid and per-humid areas near the coast, from sea-level up to 450 m altitude, but it can be found up to 1000 m.

Propagation is by seed and suckers. Seed is best sown in a moist, sandy soil at 20°C. Seedlings of 2–6 months old are planted in a rich, deep, loamy soil in full sunlight, incorporating organic matter at planting to prevent drying of the roots. Suckers grow at irregular intervals, close to the parental stem. Rooted suckers are separated at the beginning of the rainy season, and are directly planted into fertile soil for quick growth.

Ravenala madagascariensis is a host of the fungus Colletotrichum gloeosporioides, which causes leaf spot disease of, for example, areca nut palm (Areca catechu L.) in India. There the roots of traveller’s palm are also attacked by the root-knot nematode Meloidogyne incognita.

As Ravenala madagascariensis is widely planted throughout the tropics, there seems to be no risk of genetic erosion, although the genetic diversity of plants in cultivation is unknown. No germplasm collections are known.

As traveller’s palm is a popular ornamental tree that is widely grown, the development of cultivars with different habits might be a good trade option. As deforestation in Madagascar proceeds at an alarming rate, protection of the tree from uncontrolled cutting may soon be necessary.