Plant of the month 2014 December

The plant of the month: sarsaparillas 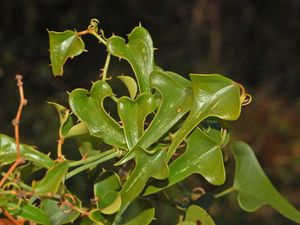 At a botanical trip with Ecologistes de l'Euzière, I was asked about the etymology of the name sarsaparilla. Everyboby was surprised that a plant so common in Languedoc could wear a Spanish name. I decided to go into this "prickly" issue for Pl@ntUse, and I found no less than 55 Smilax species used worldwide, most of them for their medicinal virtues, but some for their starchy rhizome.

Sarsaparillas are quite forgotten today, but from the 16th to the 19th centuries, they had a great fame to cure this new disease which was syphilis. Monardes described çarçaparrillas originating from the West Indies (Smilax regelii and others), and Garcia da Orta described raiz da China coming from the East (Smilax china).

For francophones (and also anglophones!), sarsaparilla is the plant that the great Smurf is eager to collect in the mountain. The illustrator Peyo is said to have chosen the name for its exotic tone. Surely he didn't imagine that the plant was used to cure syphilis! This brings a strange light on Smurfs, who were a band of asexual dwarfs at the beginning, and later men with only one Smurfette. Were they affected by syphilis?

For anglophones, sarsaparilla is also the name of a drink of old times.

Sarsaparilla uses are so completely forgotten that the French Wikipedia only speaks of Smilax aspera, et that the article on syphilis doesn't mention either sarsaparilla or China root.

As a gift, you will find thorough notes on the etymology of names such as sarsaparilla (Latin), salsepareille (French) and squine.

Pages have been created only in French for the moment, due to lack of time. You can help us translating!