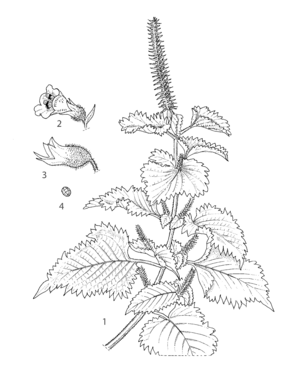 Perilla is native to the mountainous areas of India and China, and is cultivated widely in China, India, Indo-China, Japan, Korea, and on a small scale in other parts of South-East Asia, e.g. by hill-tribes in northern Thailand. It naturalized in the United States and the Ukraine as an annual weed of waste places, pastures and roadsides. Perilla is gradually becoming better known in Europe, and its cultivation is being tried out in many locations, even as far north as Finland.

The leaves, inflorescences, fruits, seeds, and seedlings (sprouts) are used as a flavouring or as a garnish in a number of foods, particularly in Japanese, Korean and Vietnamese cooking. Its customary addition to raw seafood is believed to prevent food poisoning. Perilla serves as a side dish with rice and as an important ingredient in noodles, baked fish, fried foods, cakes and beverages. The leaves can be easily dried for off-season use. The purple-leaved forms, which contain large amounts of anthocyanins, are used for colouring pickled fruits and vegetables. These forms are also very decorative ornamental plants.

Essential oil distilled from the foliage is used as a flavouring agent and as a source of commercially important compounds for the preparation of perfumes and sweetening agents.

The seed contains 29-52% fatty oil. It can be used in cooking and is employed as a drying oil in paints, varnishes, linoleum, printing ink and lacquers and as a waterproof coating on cloth. The seed meal can be used as a ruminant feed.

Dried perilla leaves and flowering tops contain 0.3-1.3% essential oil. Several chemotypes of perilla exist but the type containing mainly perillaldehyde is most commonly used as a culinary herb. Analysis of a typical essential oil of this chemotype may indicate as chemical composition: perillaldehyde 74%, limonene 13%, β-caryophyllene 4%, linalool 3%, benzaldehyde 2% and less than 1% of sabinene, β-pinene, pseudolimonene, terpinolene, pulegone, perillyl alcohol, isoeugeniol, α-caryophyllene. A monograph on the physiological properties of perilla oil has been published by the Research Institute for Fragrance Materials (RIFM).

The leaf essential oil from one of the other perilla chemotypes has been shown to consist largely of perillaketone, a potent pulmonary edemagenic agent for laboratory animals, cattle and possibly humans. This form of perilla is normally avoided by cattle, but poisoning may be caused by hay containing it.

Another chemotype contains myristicin, which is hallucinogenic. Yet another type has the ketone rosefuran, one of the character impact components of rose oil, as its major component. This suggests it would be feasible to use perilla essential oil as a substitute for rose oil in perfumery. Perilla essential oil has also been used as a source of perillaldehyde for the preparation of perillartine which is 2000 times sweeter than sugar and has been used to flavour tobacco, but is rarely used nowadays because of its poor solubility in water, its bitterness and its flavour of menthol and liquorice.

Perillaldehyde has been reported to exhibit antimicrobial activity.

The seed oil is similar to linseed oil in odour and taste but has a superior drying quality. It is one of the richest vegetable sources of α-linolenic acid, which has anti-hypertensive and anti-thrombosis effects, anti-allergic activity, and inhibitory effects in carcinogenesis.

Germination of perilla seed takes 5-15 days. Initially the plant grows slowly. Harvesting of leaves can start about 3 months after germination. Undisturbed plants start flowering about 4 months after sowing. Seeds are mature about 6 weeks after flowering.

In the United States, where perilla has become an introduced weed, it germinates in spring when there is no longer any night frost. During summer the plants remain about 15 cm tall until flowering in August, when the stem elongates to about 1 m. Frosts kill the plant in November.

Perilla is a very variable species and the variability has been expressed in numerous species, variety, form and cultivar names. At the moment perilla is considered as a single complex species which is subdivided into varieties and cultivars, mainly based on size and colour of the leaves, incision-type of the leaf-margin, size and hairiness of the calyx in fruit, and size and colour of the nutlet. Cultivars include "Atropurpurea”, "Crispa” and "Curled”.

Based on the chemical constituents of the essential oil in the leaves, 6 genetically stable chemotypes of perilla have been identified:

- PA type: perillaldehyde and L-limonene are the 2 major components;

- EK type: elsholtziaketone is the major component and naginataketone a minor component;

- PK type: the major component is perillaketone with a small amount of isoegomaketone and perillene;

- PP type: consists mainly of phenylpropanoids (myristicin, dillapiol and elemicin) with few or no monoterpenoids;

The PA type is preferred for use as a spicy herb or crude drug because of the agreeable scent of perillaldehyde. In contrast, EK and PK possess the disagreeable odour of terpene ketone, while PP is odourless. PK and PP are both unfit for human use because of the presence of large amounts of perillaketone in PK which has been shown to be toxic to animals, while myristicin in PP is hallucinogenic.

The reported ecological range of perilla is considerable. In its range the mean annual rainfall varies between (500-)1000-2000 mm and the mean annual temperature from (6-)12 to 18°C. The optimal temperature for germination and growth is about 20°C, but higher temperatures are easily tolerated. Temperatures should not fall below 10°C. In the tropics perilla is found at higher elevations. It needs sunny or partially sunny conditions. For abundant vegetative growth, the plants should be exposed to warm conditions and long daylengths and provided with adequate moisture; for flower production perilla requires short-day conditions. It is tolerant of a soil pH of 5-7.5, and thrives in sandy soils rich in organic matter.

Perilla is a short-day plant and has been a favourite experimental subject for the elucidation of the mechanism of flowering in higher plants, particularly the concept of a transmissible flowering stimulus. It has a critical daylength of about 14 hours and the minimal number of short days for the induction of flowering ranges from 6-9. The dark period should have a temperature of 22-27°C for optimum induction. For abundant flowering and hence abundant production of seeds, perilla should be exposed to short days for 3-4 weeks, starting after the fourth leaf-pair stage. N-stress can also induce flowering, even under continuous lighting.

Perilla is commercially propagated by seed. Seeds developing in autumn remain dormant until spring. Gibberellin is sometimes used to break dormancy. Seeds lose their viability in less than a year at room temperature, but viability can be extended if they are stored at low temperatures and low humidity. Seeds are either sown directly in the field or initially raised in a nursery until they have developed 5-6 leaves at which time they are ready for transplanting. Prior to sowing, fertilizer is applied and incorporated into the soil. For the production of leaves, seeds are sown in rows 40 cm apart in raised beds and thinned to 12 cm apart (200,000 plants/ha). When flower heads are desired, perilla is planted in rows 90-120 cm apart with the spacing within rows depending on the cultivar and time of planting: spacing is narrower for early-flowering types and under short-daylength conditions.

To produce perilla sprouts for consumption, seeds are broadcast on raised beds worked up to a fine tilth. Seeds are then just covered with sieved soil or sand and the bed watered and covered with straw. The cover is removed as soon as the sprouts emerge.

The volatile compounds of callus tissue of perilla have been reported to consist mainly of rosmarinic acid (about 50% of the phenolic extractives), caffeoylglucose (20-30%) and caffeic acid. In addition to these components, intact plants contain large amounts of flavones, apigenins, luteolins and anthocyanin. Callus culture can thus serve as a simpler method for the isolation of caffeic and rosmarinic acids which are useful as antiphlogistic agents and for other remedies.

The economic production of safe food colourants, antioxidants, and free radical scavengers from cell culture of perilla anthocyanins seems to be within reach.

Perilla benefits from application of 10 t/ha of compost. A basal dressing per ha of 40 kg N, 30 kg P2O5 and 20 kg K2O is recommended. A top dressing of 70 kg/ha urea and 50 kg/ha KCl is advisable after harvesting tops. When grown on field scale, perilla is often mulched with black polythene sheet to conserve moisture and prevent weed growth. In Japan perilla is commonly grown under polythene cover or in glasshouses with artificial heating and lighting and controlled irrigation. Deep-flow hydroponic culture of perilla has been reported from Korea.

Perilla sprouts are harvested when the cotyledons are expanded and the first true leaves have formed (7-20 days after sowing depending on the season).

Harvesting of vegetative tops or leaves can start when plants are 30-40 cm tall, about 2-3 months after sowing or transplanting. Harvesting continues as often as needed, usually until flowering starts. Mechanical harvesting of leaves has been reported from Taiwan, using tea-leaf harvesters. As flowering progresses, the level of aldehydes in fresh perilla herb is reported to increase and the level of esters to decrease.

Perilla inflorescences are collected by simply cutting the stalks, usually when these bear 5-6 opened flowers. When perilla is grown as a seed crop, leaves are often picked as a by-product.

Yields of fresh perilla leaves may reach 20-30 t/ha, or 2-3 t/ha dry weight. Thus, about 20 kg/ha of perilla essential oil may be obtained. Seed yield has been reported to average 770 kg/ha in commercial production in Korea. However, high-yielding cultivars can easily reach 1.1-1.2 t/ha. The commercial extraction rate of seed oil is about 40%.

Harvested perilla leaves are tied together with a rubber band into bundles of 10. Inflorescence stalks are trimmed to a final length of 8-10 cm and sprouts are washed before they are packaged and sold in the market. For extraction of essential oil, the leaves and flowering tops are hung in bundles in a well-ventilated room and allowed to dry for about 2 weeks prior to distillation.

Perilla is predominantly self-pollinating. The chemical composition of the various chemotypes of perilla is controlled by single genes following Mendelian inheritance: a series of multiple alleles (G1, G2, g) and an independent pair of alleles (H, h). G1 and G2 have been found to be essential in the initiation of monoterpenoid biosynthesis in perilla. G1 is responsible for the development of the EK type and is dominant over G2 that produces the PK type, while the homozygous (gg) plants produce the PP type. With G1 or G2, plants homozygous for the dominant allele H (G-HH) produce the PA type while those heterozygous for H (G-Hh) contain large quantities of L-limonene, an intermediate product in the synthesis of perillaldehyde. The PL type is produced in the presence of the polymeric genes Fr1 and Fr2 which are involved in the conversion of citral into perillene, while the C type, which controls the production of large quantities of citral, is homozygous recessive for the two genes, fr1 fr1 fr2 fr2.

Non-shattering cultivars should be bred for commercial seed production.

Perilla as an oil-seed crop and spice is particularly important to some countries in Asia, e.g. Japan, Korea, China and Vietnam. There is a limited market in Europe and the United States catering to the taste of Asian immigrants. Uses of perilla other than those traditionally known, e.g. as animal feed additive, artificial sweetener and a source of rosefuran have not been fully explored. Production of the red pigment shisonin from perilla may fill the need for the future demand for natural food colouring. In all these endeavours, cultivation of the PA type fit for human use should be considered. There is a definite potential for South-East Asian countries to be players in the market for novel uses of perilla.