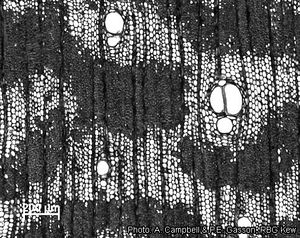 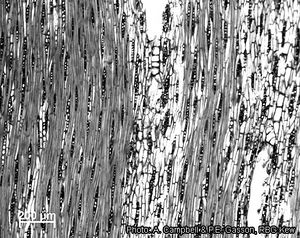 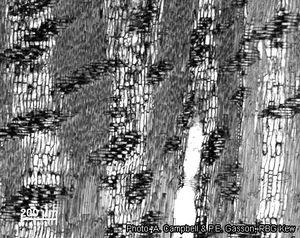 Peltophorum africanum is native from southern DR Congo to South Africa and Swaziland. It is cultivated in Kenya, Tanzania, Madagascar, Australia and the United States.

Both the bark and roots of Peltophorum africanum are used medicinally in traditional African medicine.

Throughout southern Africa, bark and root decoctions are applied for the treatment of wounds, venereal diseases, toothache and taken internally as an anthelmintic. They are also gargled to treat a sore throat. In Zimbabwe they are taken internally as general tonics.

A decoction of the bark provides a cure for colic and other stomach disorders, for fever and a sore liver; it induces vomiting and is said to clean the liver and relieve pain. The fresh bark is also chewed to relieve abdominal pain. The steam from a hot decoction is applied against painful eyes.

In Namibia an infusion of the roots is an effective remedy for heavy, painful kicking of the foetus in pregnant women, but it is only applied if the problem lasts for at least 2–3 days. The infusion furthermore stops heavy bleeding on giving birth and is used for treating cough with blood and tuberculosis. The crushed bark in water is rubbed into the coats of pets to keep away fleas and maggots. In Zimbabwe, root decoctions and infusions are taken to treat nausea and chest pain and for blood purification. The Zulu people boil the roots with those of Bridelia cathartica G.Bertol. and Ochna sp. and drink the mixture to cure infertility. The boiled roots are applied as an enema to treat backache.

The wood is used for carving, turning, making furniture, grinding blocks, wooden buckets, tool handles and wagons. It is not suitable for fence poles or buildings as it is not borer-proof. The wood is widely used as fuel. Peltophorum africanum is a good source of bee forage. It is a very good garden, avenue and shade tree and is particularly beautiful when in flower. It is also popular as a bonsai tree. The pods are favoured by cattle and the pods and young leaves are browsed by goats; it is an important fodder plant during the dry season.

The trade in Peltophorum africanum bark is poorly documented and only locally important. In north-eastern South Africa the bark is in high demand and is traded for c. US$ 9/kg.

The bark of Peltophorum africanum contains bergenin, an isocoumarin which inhibits DNA topoisomerase II, has hepatoprotective activity, anti-arrhythmic effects of the coronary artery and an inhibitory effect on the growth of the bloodstream form of Trypanosoma brucei. The bergenin derivatives coumaroylbergenin and norbergerin have been isolated as well. The seed contains a potent proteinase inhibitor (trypsin and α -chymotrypsin), which has not yet been characterized.

An aqueous extract of Peltophorum africanum roots reduced the magnitude of rabbit jejunum contractions. The effect was blocked by propanolol, suggesting an action on the β-adrenergic receptors. Both ethanolic and aqueous extracts of roots and bark showed inhibition in vitro of the gram-negative bacteria Salmonella typhi, Shigella sonnei, Escherichia coli, Campylobacter jejuni and Aeromonas hydrophila. The ethanol extract of the bark showed strong molluscicidal activity against the snail Biomphalaria alexandrina, a host of schistosomiases (causing bilharzia). An oxidized gallotannin isolated from the stem bark of Peltophorum africanum was shown to have strong activity against HIV-1 reverse transcriptase and integrase in an enzyme cell-free system.

Browse (leaves and twigs) contains 7% crude protein and its digestibility coefficient is low (0.37). The tannin content in the leaves increases in response to grazing damage. The heartwood is reddish to dark brown and distinctly demarcated from the dirty white to pale brown sapwood. It is heavy, with a density of about 900 kg/m3 at 12% moisture content. The grain is commonly interlocked, texture fine. The wood works fairly easily, takes a good polish and produces a smooth finish.

Peltophorum comprises about 15 species, all native to tropical regions with Peltophorum africanum the only species indigenous to Africa. It is most closely related to Bussea, which differs in its thickly woody, dehiscent fruits.

The ‘weeping’ in the vernacular names of Peltophorum africanum refers to a phenomenon that occurs in spring just before the first rains: moisture drips from the branches of some of these trees. It is caused by nymphs of small frog-hoppers or spittle-bugs, Ptyelus grossa, which suck up the sap of the trees and excrete almost pure water, which drips to the ground.

Peltophorum africanum has a wide distribution in the warmer, lower and drier regions of southern Africa with an annual rainfall of 300–900 mm, at 300–2050 m altitude. It is most common in open savanna woodland, with temperatures varying from –6°C to 44°C, with an average of 23°C. Night temperatures of –9°C will cause branches of older plants to freeze back, but plants will regrow. Peltophorum africanum shows a definite preference for deep sandy or sandy-loam soils, and is encountered on very poor, acidic, sandy, loamy to gravelly soil derived from sandstone, quartzite or shale and is also found on shallow soils on norite, granite and laterite. In Zimbabwe it is often found on mine dumps and its dominance in the vegetation is taken as an indication of a high level of arsenic in the soil; indirectly this may indicate the presence of gold.

The storage behaviour of the seed is orthodox. Viability is maintained after 3 years of hermetic storage at room temperature. The 1000-seed weight is 300–800 g. Fresh seed should be soaked overnight in hot water, after which it is sown in a mixture of river sand and compost (5:1) and kept moist. The seeds take 3–10 days to germinate and the germination percentage is usually high. Young plants transplant readily, are fairly fast growing, but need protection from frost for 2–3 years although they withstand slight frost.

Peltophorum africanum is easy to grow. The root system is not aggressive. After cutting the tree coppices readily. Increased cutting height has a strong positive effect on the number of new shoots.

Peltophorum africanum does not appear to be endangered in its native range. Several genebanks hold seed, but the variation in the species has not been studied.

Interest of phytochemists in Peltophorum africanum will probably persist, because the bark and root extracts show interesting pharmacological activities, but only a few active compounds have as yet been isolated. The tree also has a future as an ornamental, but as a browse species it is of very limited value because the quality and digestibility is low. Its tolerance to adverse soil conditions makes it a candidate for reclaiming denuded sites such as abandoned mines and mine dumps.