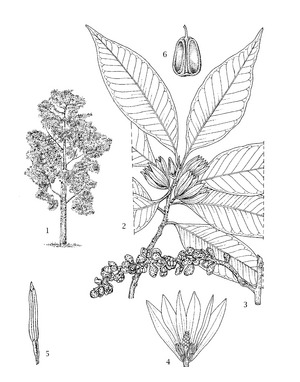 Michelia comprises about 30 species and is distributed from Sri Lanka and India towards the Himalayas, Indo-China, China, southern Japan, Taiwan, Thailand, Peninsular Malaysia, Sumatra, Java, Borneo, the Philippines and the Lesser Sunda Islands. Some species are commonly cultivated throughout the tropics. Within Malesia 7 species are native.

Michelia wood is used for general light construction, bridge building, flooring, door panels, vehicle bodies, packing cases and formerly also for battery separators. The nicely figured wood of M. champaca is particularly used for furniture and cabinet work, carvings, turnery and pattern making. Michelia has also been used for the production of veneer and plywood, sometimes as a substitute for "American whitewood" (Liriodendron tulipifera L.), cement-bonded wood-wool board, and as firewood. The wood may be suitable for the production of hardboard.

In West Java M. champaca is used to reforest badly eroded areas, and is suitable as a wayside tree in low-traffic areas. M. champaca and M. × alba are often cultivated for ornamental purposes, also near temples. Their fragrant flowers yield an essential oil used as a perfume though with a different odour, and in India and Indonesia the flowers are used in religious ceremonies, in Bali e.g. in the "Ngaben" ceremony. The seed oil of M. champaca shows antibacterial activity. Its leaves are used to feed silkworms. A decoction of the bark and sometimes also of the leaves of M. champaca is commonly given after childbirth. The bark is also used as a febrifuge. In Burma (Myanmar) the flowers are used to treat leprosy and the leaves for colic.

"Chempaka" is a general trade name which apart from Michelia wood includes wood of Elmerrillia (usually), Magnolia and Manglietia. Small amounts of chempaka are imported by Japan from Sabah and Sarawak. Supplies are limited and in 1992 only about 900 m3of chempaka timber with a value of about US$ 87 000 were exported from Sabah. The flowers are marketed locally.

Michelia yields a medium-weight or occasionally lightweight hardwood with a density of (310-)460-695 kg/m3at 15% moisture content. Heartwood olive-brown turning to dark brown with a greenish tinge upon exposure, clearly differentiated from the pale brown, up to 8 cm wide sapwood; grain straight or slightly interlocked; texture fine to moderately fine and even; wood slightly greasy to the touch, sometimes with camphor-like odour. Growth rings distinct, boundaries indicated by marginal parenchyma; vessels moderately small to medium-sized, solitary and in radial multiples of 2-5, usually open; parenchyma sparse, apotracheal in marginal bands; rays very fine to moderately fine, oil cells at the margins of the rays sometimes visible with a hand lens; ripple marks absent.

Shrinkage upon air drying is very low. In Peninsular Malaysia the wood air dries without degrade, but insect attack may be severe during seasoning. It takes about 2 and 4 months, respectively, to air dry boards 13 mm and 38 mm thick. In India it has been recommended to ring girdle M. champaca trees about 3 years before felling and conversion to prevent possible warping and checking of the wood. The wood is soft to moderately hard and of low to moderate strength. It can be worked easily, but occasional specimens of M. philippinensis have hard chalky deposits which dull cutting edges. The wood is non-durable to moderately durable depending on species and provenance. The wood of M. montana is reportedly very resistant to fungal attack. The heartwood is resistant to dry-wood termites and refractory to treatment with preservatives. The sapwood is considered to be non-susceptible to Lyctus.

Growth form is according to Roux's architectural tree model, characterized by a continuously growing monopodial orthotropic trunk with plagiotropic branches. Vesicular-arbuscular mycorrhizae have been observed on M. champaca roots in India. In Java the mean annual increment of 10-27-year-old M. champaca trees is 1.0-1.8 m in height and 1.5-2.0 cm in diameter, the corresponding figures for almost 10-year-old M. montana trees in East Java are 1.3 m and 2.9 cm respectively. M. × alba, M. champaca, M. koordersiana and M. montana flower and fruit throughout the year, M. philippinensis in January and February, M. salicifolia in March and July, and M. scortechinii in April-May. The flowers are protogynous and pollinated by beetles which feed on the stigmas, pollen, nectar and secretion of the petals.

Michelia belongs to the tribe Michelieae and is closely related to Elmerrillia which differs in having a sessile gynoecium. M. × alba has probably arisen by hybridization between M. champaca and M. montana. It only rarely produces fruit and is unknown in the wild.

Michelia can be propagated by seed. For ornamental purposes it is also propagated by various vegetative techniques. M. champaca has 10 000-29 500 dry seeds/kg and M. montana about 1900 dry fruitlets/kg. Seeds should be dried in the shade; they lose their viability very fast, often within 2 weeks. Seed viability can be maintained by moist storage at 5C for about 7 months or by storage in pits at 13C for about 4 months. Seed should be sown in the shade, but shade should be removed after germination. Before sowing, the seeds may be treated with insecticide, as they are susceptible to insect attack. Seedlings of 12-15 months old are usually made into stumps with a diameter of at least 1.5 cm before planting in the field. M. champaca requires moist, deep and fertile soils and is a moderate light-demander. In Java it is planted at 3 m × 2.5-3 m but the open canopy makes weed control or planting of cover crops necessary. Although planted M. montana grows very fast, the stem is crooked. M. champaca can attain an annual increment of 20-25 m3/ha during the first 10 years. A rotation of 50 years is recommended to produce sawn timber. M. champaca is susceptible to fire; it coppices well. Moreover, it is intolerant of air pollution when planted as a roadside tree.

In Arunachal Pradesh, India a germplasm bank with 33 clones and 2 seed orchards with 25 clones each of M. champaca have been established.

The favourable wood properties and fairly fast growth as observed in a few trials suggest that M. champaca is promising for increased use. Although it is commonly cultivated, more information needs to be obtained on its silvicultural aspects through research.