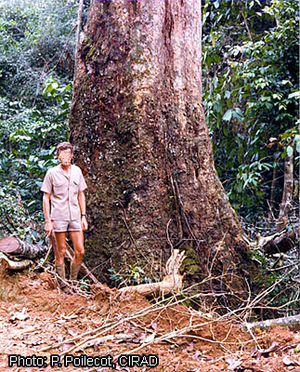 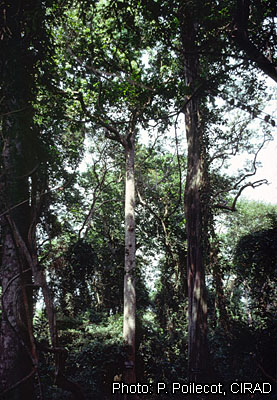 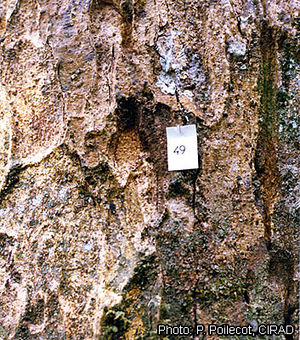 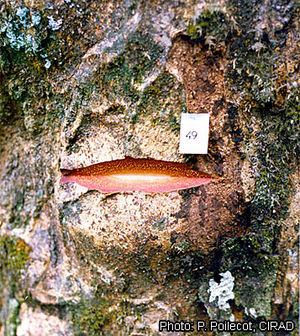 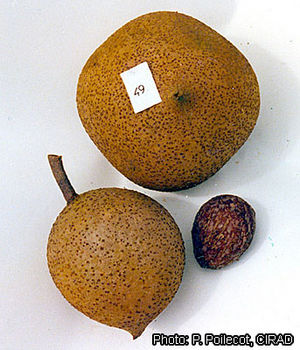 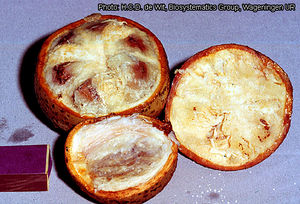 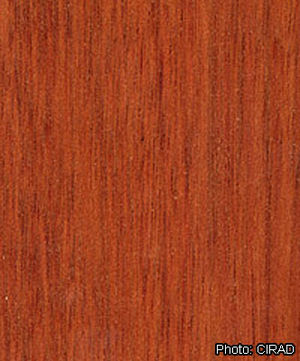 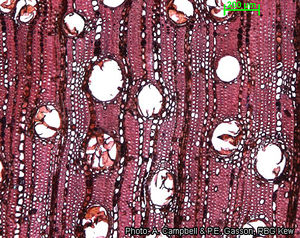 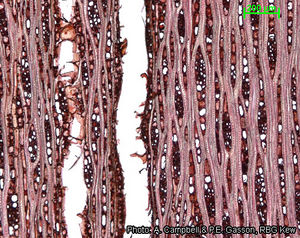 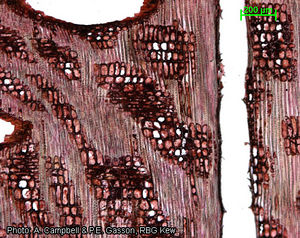 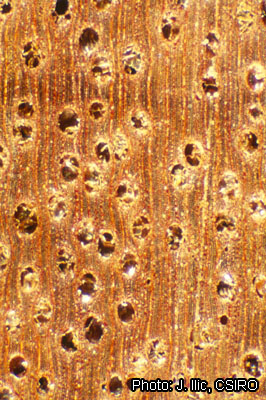 The fruit is edible, but only when it is quite ripe. The white-yellow pulp is sweet but fibrous. However, the fruits of some trees remain sour. Rotting fruit pulp is attractive to large forest snails, which can be collected in large numbers under the trees for human consumption. The seeds are edible, and they contain oil that is locally used for cooking. The resin has been used in DR Congo to repair earthenware.

Several plant parts are used in traditional medicine. Bark decoctions or macerations are taken as anthelmintic, to treat stomach complaints, gonorrhoea, ovarian troubles, coughs and anaemia, and to ease childbirth. They are applied externally to treat wounds, sores, ulcers, scabies, skin diseases, itch, rheumatism, uterine and vaginal inflammations, and fever. Lotions made from the roots or fruit are applied to skin diseases and sores. The resin is applied to burns and scabies. In Liberia and Nigeria the bark is used as fish poison in small streams; its potency is limited. Burnt bark has been used in soap manufacture and to produce salt.

The amounts of Mammea africana timber in trade are small. Statistics are not available, except for Cameroon, where the recorded production of logs was 81 m³ in 2000 and 65 m³ in 2001.

The heartwood is pinkish brown to reddish brown when freshly cut, darkening to dark reddish brown or purplish brown upon exposure, and is distinctly demarcated from the pinkish brown to pale brown, up to 6 cm wide sapwood. The grain is usually interlocked, texture medium to rather coarse. Quartersawn surfaces are mottled with ribbon like figures and abundant silver grain, tangential surfaces have flowered figures. The wood is resinous and dark oily spots are often present on tangential surfaces.

The wood is moderately heavy, with a density of 650–860 kg/m³ at 12% moisture content. It air dries slowly, and careful drying is needed because it is liable to checking and distortion. The rates of shrinkage are high, from green to oven dry 6.0–7.1% radial and 8.7–11.6% tangential. Once dry, the wood is moderately stable in service.

The wood saws cleanly but slowly and works well; the silica content is low (0.005–0.015%). It finishes smoothly with a nice polish. The wood holds nails and screws well, but pre-boring is needed to avoid splitting. The gluing properties are satisfactory, but painting and varnishing may give poor results due to the presence of resin. The presence of resin makes peeling difficult. The wood is fairly durable, being quite resistant to fungi and to powder-post beetle and pinhole borer attacks, but moderately susceptible to termite attack. It has also shown some resistance to marine borers. The heartwood is very resistant to impregnation by preservatives. Several xanthones have been identified in the heartwood and stem bark. The seeds contain about 10% of oil, in which several unusual fatty acids occur: ricinoleic acid (20%), vernolic acid (12%), malvalic acid (6%) and sterculic acid (4%). Other, more common, fatty acids present in the oil are palmitic acid (28%), stearic acid (27.5%), myristic acid (1.5%), lauric acid (1%), and traces of oleic acid and linoleic acid. Several coumarins and the sterol friedelone have been isolated from the seeds. Coumarins have also been isolated from the bark; these showed noteworthy cytotoxicity against the human 9-KB cell line and significant antibacterial activity against Staphylococcus aureus. A bark extract showed vasodilator effect, in which the coumarins might also be involved. In tests with rats, the extract showed slight toxicity at doses of 30–90 mg/kg.

The latter is endemic to mountain forest in north-eastern Tanzania, where it is mainly valued for its edible fruits. Mammea usambarensis is close to Mammea africana, but differs in the thin wall of the fruit stone.

Tropical America is home to another species, Mammea americana L., which is cultivated in tropical Africa as a fruit tree. Australia has one species.

Mammea is close to Garcinia, which differs in its terminal buds enclosed by the petioles (buds not enclosed by petioles but by scales in Mammea), in lacking glandular dots on the leaves and in its 4–5 free sepals.

The wood of Mammea odorata (Raf.) Kosterm. from tropical Asia and islands in the Pacific Ocean is locally exploited in its native region. Mammea odorata has been recorded from Zanzibar (Tanzania), where it has probably been planted.

Mammea africana grows slowly; the annual growth of saplings is about 30–50 cm. In Nigeria trees have been reported to reach 15 m tall with a bole diameter of almost 30 cm 24 years after planting.

Flushes of young leaves are coppery red or deep red. Trees may start flowering at an age of 10 years, but initially without developing fruits. Flowering is irregular. The flowers are morphologically either bisexual or male, the two types occurring on different trees, but pollen research showed that the apparently bisexual flowers are functionally female, having pollen without apertures. This means that Mammea africana is functionally dioecious. In Côte d’Ivoire flowering takes place in August–December, sometimes up to April, and fruiting from August to March. Mass fruiting occurs every 2–3 years. The fruits ripen 10–12 months after flowering. They are eaten by elephants, which disperse the fruit stones. Mammals such as porcupines and antelopes feed on the seeds.

Mammea africana occurs in evergreen and moist semi-deciduous forest, up to 1000 m altitude. It prefers relatively fertile and moist soils, clayey as well as sandy. It is often found on seasonally inundated alluvial soils where it may form small stands. However, Mammea africana usually occurs scattered in the forest. In Ghana it has been associated with base-poor soils.

Mammea africana is propagated by the fruit stones. One kg contains about 25 stones. Germination is irregular; it begins after 3–4 weeks and may take up to 8 months. Seed treatment is not necessary, but germination is promoted by carefully filing a hole in the wall of the stone or soaking the seeds in water for 24 hours. The germination rate is often high: up to 90% for fresh seeds, about 70% for seeds sown 2–6 weeks after being harvested and about 35% for seeds sown 10 weeks after being harvested. Seed beds should be shaded. Striplings of 1.5–2 years old can be planted out, but seeds are also sown directly into the field. A spacing of 8 m has been recommended. Natural regeneration may be abundant under the mother tree.

In most regions within the distribution area, Mammea africana trees occur in low densities and scattered. In forests in southern Cameroon on average 1 tree with a bole diameter above 60 cm can be found per 30 ha. Organic mulching as well as manure application around the base of planted trees promotes growth. Young trees grow well in the shade, but when they have reached a bole diameter of 15 cm the shade can be removed gradually.

In natural forest in Côte d’Ivoire it has been recorded that seedlings are heavily attacked by insects.

The minimum felling diameter is 60 cm in Liberia, Cameroon and the Central African Republic, and 70 cm in Ghana.

Mammea africana is widespread, but it usually occurs in low densities in the forest. It is also planted, although not on a large scale. It does not seem to be threatened at present, and the level of exploitation for its timber seems to be low. The major threat is the ongoing destruction of the evergreen and moist semi-deciduous forest types for which it is characteristic. Some trees produce fruits which are sweet when ripe, whereas the fruits of other trees remain sour and unpalatable. This makes selection of genotypes with superior characteristics for fruit production recommendable.

The prospects for Mammea africana as a timber tree of higher commercial importance seem to be limited because the high rates of shrinkage of the wood, scattered occurrence and low growth rate are serious drawbacks. It may have better prospects as a fruit tree and might be useful for planting in agroforestry systems, in which timber production might also play a modest role. However, much research is still needed on means of vegetative propagation in combination with selection of superior fruit types.