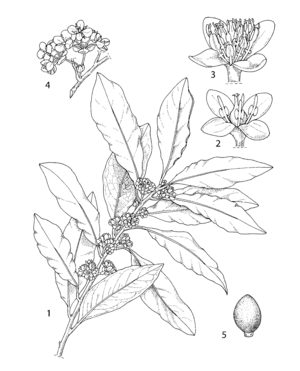 L. nobilis originates from the eastern Mediterranean and Asia Minor, where natural stands still provide a considerable part of the laurel leaf production. A chemically distinct form is native to China. L. nobilis is grown and occasionally naturalized throughout the drier tropics, subtropics and warm temperate areas. It is also cultivated as a garden and pot plant worldwide.

In classical Greece L. nobilis was dedicated to the god Apollo and its leaves were used to make wreaths given in honour to heroes and poets. Later, its name is found in words such as "laureate” and "baccalaureus” from which the word "bachelor” has been derived. Laurel was also used medicinally and was said to protect against lightning.

Laurel leaves, also commonly called bay-leaves, and to a much lesser extent the berries, are now primarily used for culinary purposes. The leaves are applied as seasoning, imparting an excellent fragrant aromatic flavour with notes of lemon and clove to meat, game, poultry and fish dishes, syrups, sauces, stocks and stews. As fresh leaves are rather bitter, they are usually dried, but the widely used old dry leaves are considered a poor substitute for leaves that have been dried for a few days only. Laurel leaves are one of the few spices that should be added early in cooking as the taste gradually intensifies. They should be removed before serving the dish as they remain fibrous and their sharp edges can cause internal injuries. Crushed or powdered laurel leaves are an essential ingredient of mixed pickling spices and are used industrially in meat products, sauces, vinegar and pastries. In industry, an essential oil steam-distilled from the leaves is used similarly. In Italy and Turkey laurel leaves are used for packaging liquorice. Such large amounts were formerly used in this way that in Scandinavia nearly all the laurel leaves used for household purposes were recycled liquorice packaging material, and their somewhat sweeter flavour became accepted as the true flavour of laurel leaves. Leaves are also placed in containers of cereal products, to repel insects.

Laurel leaf oil plays a minor role in perfumery to provide a masculine note. It is used especially in bath products. In the United States the regulatory status "generally recognized as safe” has been accorded to laurel leaves (GRAS 2124), laurel leaf oil (GRAS 2125) and laurel leaf oleoresin (GRAS 2613). Laurel fruits yield a fatty oil that also contains aroma components. It is occasionally used as a culinary herb oil and in perfumery (GRAS 2612).

L. nobilis has a long history of medicinal use. The fruit oil is still included in some pharmaceutical preparations. Both leaves and berries are traditionally considered as astringent, stomachic, stimulant and narcotic. A decoction of the leaves is used for treating problems of the urinary organs and dropsy. It is also considered a powerful emmenagogue. The seed oil is used to treat rheumatic pains.

Several cultivars of laurel are grown as ornamentals. On the other hand several ornamentals referred to as "laurel” aren't true laurels, and some are even poisonous. Laurel can be sheared into distinctive shapes making it a popular container and garden plant. In South-East Asia L. nobilis is only planted as an ornamental, mainly at higher elevations in the highlands. Laurel wood is occasionally used for posts. The flexible twigs were formerly used to make hoops for small barrels.

World trade in dried laurel leaves exceeds 2000 t per year. Turkey is the major producer and exporter (about two-thirds of world trade). The import of dried leaves of laurel in Western Europe is estimated at 800 t annually. Small quantities are also imported from Morocco, Albania and Israel.

The leaf of laurel has a pleasant odour and its taste is characteristically strong, pungent and aromatic. The bitterness of fresh leaves is easily removed by drying. Per 100 g, dried laurel leaves contain: water 4.5-10.0 g, protein 7.6-10.6 g, fat 4.5-8.8 g, carbohydrates 65 g, ash 3.7-4.2 g (Ca 1 g, P 110 mg, Na 20 mg, K 530 mg, Zn 40 mg, Fe 530 mg), thiamine 0.10 mg, riboflavin 0.42 mg, niacin 2 mg, ascorbic acid 47 mg, and vitamin A 6185 IU. The energy value is 1725 kJ/100 g. The essential oil from the leaves (up to 3%) comprises over 140 components with 1,8-cineole predominating (up to 50%). The catechin content of the leaves is high and is preserved by drying. Oil from China is characterized by eugenol. The oil is colourless with strong aromatic, stimulant and narcotic properties. It has a warm, fresh, penetrating, camphor-like odour resembling eucalyptus and a distinctly sweet, soothing and cooling, medicinal, spicy, peppery flavour with good persistence and bitter aftertaste. The fresh buds and young leaves contain 3-octulose (D-gluco-L-glycero-3-octulose), a compound rarely found in nature. The seeds contain about 25% fatty oil comprising at least 20 fatty acids with lauric acid (11-52%), palmitic acid (5-17%), oleic acid (15%-40) and linoleic acid (17-23%) as the main constituents. The petroleum ether extract of the fruits contains several characteristic compounds, e.g. 10-hydroxyoctacosanyl tetradecanoate, 1-docosanol tetradecanoate and 11-hydroxytriacontan-9-one. A monograph on the physiological properties of laurel leaf oil has been published by the Research Institute for Fragrance Materials (RIFM).

1,8-cineole, α-terpinyl acetate and methyl eugenol are used to reinforce the essential oil.

Pruning studies in laurel indicate that leaf growth is fast during the first 30-40 days, becoming slower in the next 15-20 days and generally ceasing after about 60 days. Leaves may remain on the tree for 1-3 years. The essential oil accumulates in the palisade and mesophyll cells of the leaves and reaches a content of 1-3% on a fresh weight basis. The content increases during early summer and reaches its maximum in midsummer.

There are many ornamental cultivars of laurel, e.g. "Aurea”, the golden or variegated laurel, "Crispa” with undulating leaf margins, "Angustifolia” with narrow leaves.

Laurel, which occurs naturally in Mediterranean maquis and forest vegetation, is very adaptable, growing well at average annual temperatures from 8-27°C and with an annual precipitation of 300-2200 mm. Light frost is tolerated. More severe frost may kill the aboveground parts, but plants may regrow from their basal parts. Its light requirements are high. A decrease in temperature may reduce leaf size and oil content of the leaves. Leaves from trees grown at or near sea-level are reported to contain more oil than those from trees grown on inland hills. Although well-drained, deep and fertile soils are preferred, growth is satisfactory on a wide range of soils with a pH of 4.5-8.3. Waterlogging is not tolerated.

As a potted plant, laurel grows well with at least 4 hours or more per day of direct sunlight. Day temperatures of at least 18°C and night temperatures of 4-13°C are best. The soil must be slightly moist at all times.

Information on the propagation of laurel is contradictory. In Italy seed is preferred, as cuttings are reported to root poorly, elsewhere cuttings are preferred as they result in more uniform plantings. Mature shoots 10-12 cm long with apical buds are taken as cuttings; they grow more vigorously than cuttings with only lateral buds. Root cuttings can be used if treated properly, e.g. dipped in fungicide immediately after they are taken. Marcotting is sometimes practised to obtain plants for ornamental purposes. The seeds are soaked in warm water for 12-24 hours before sowing. Only fresh seed should be used, as viability is lost rapidly. Shading and mulching the seedbeds promotes germination and early seedling growth. Germination takes 3-4 months and seedlings can be transplanted when 2 years old.

The appropriate planting distance depends on the method of harvesting and availability of water. For smallholders harvesting manually an initial spacing of 3 m × 3 m, gradually thinned to 6 m × 6 m is recommended. In commercial plantations in Israel with provisions for irrigation the spacing is 2-3 m, whereas in Russia hedges planted at 0.5 m × 2 m are used in plantations that are harvested mechanically.

Laurel can be intercropped with annual crops during the first 2-4 years. This will not only provide additional income to the grower but also reduce weeding requirements. Leaf residues after distillation of oil may serve as mulch and as protection against frost. As an ornamental, laurel is often grown in containers filled with equal volumes of sand, loam and peat. Transplanting is only necessary once every few years.

There is little information on the economic damage in laurel caused by diseases and pests. Diseases are far more important than pests and are often widespread. The two most damaging diseases of laurel are root rot caused by Phytophthora spp. and leaf-spot by Colletotrichum spp. Phytophthora cinnamomi causes yellowing and wilting of leaves and dieback of twigs. Severe attack may be fatal in both young and mature plants. Affected plants should be uprooted, burnt and replaced by healthy stock. Colletotrichum nobile causes brown spots to develop on the leaves and become progressively larger. A general but low level of infection is common. Though it results in little damage to the leaves, it affects leaf oil content more severely. Routine spraying is necessary in severely affected areas, but care must be taken to avoid fungicide residues on harvested leaves. In Italy, scale insects and psyllids cause some damage.

Leaves of laurel are harvested in summer or autumn in temperate regions. Plants established from cuttings in spring can be harvested for the first time in the autumn of the same year if irrigated or in the following year if rainfed. Up to three harvests can be made annually, but two cuts have been shown to give the highest yield. Harvesting is usually done manually, early in the day. In Russia systems have been developed to mechanically harvest laurel grown in hedges. When berries are harvested they are mostly picked at the same time as the leaves.

Laurel leaves are dried in thin layers in trays in a sheltered area for 12-15 days. The leaves are pressed lightly under boards to prevent curling. Steam distillation of leaves yields laurel leaf oil; an essential oil can also be distilled from the berry.

There are no known germplasm collections and breeding programmes of laurel. There seem to have been no attempts to extend the cultivation of laurel into new areas such as South-East Asia.

The demand for selected dried herbs, including laurel leaves, on the major European markets is expected to grow much faster in the industrial food and institutional catering sectors than the relatively stable growth rate in the retail sector. However, most of the user countries are quality conscious and new exporters should be able to provide dried herbs of high quality, particularly in terms of cleanliness and absence of pesticide residues, if they are to successfully penetrate the market, which is currently not short of supplies.