1, base of bole; 2, flowering twig; 3, dehisced fruit with one valve removed. Redrawn and adapted by Iskak Syamsudin 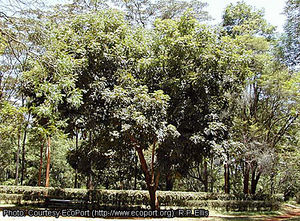 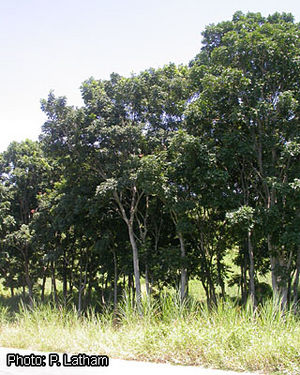 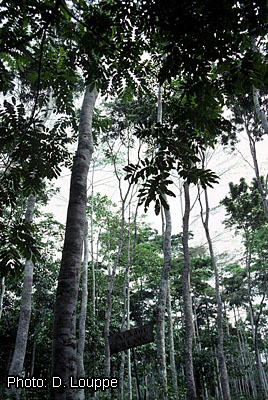 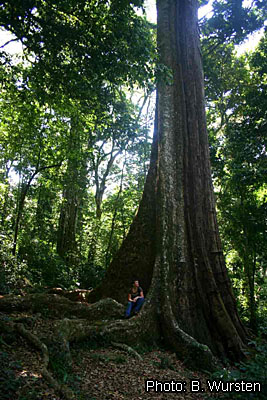 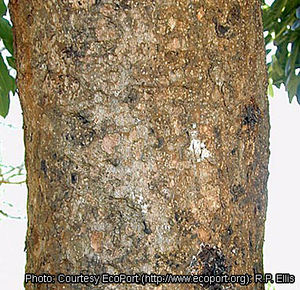 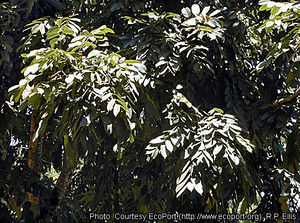 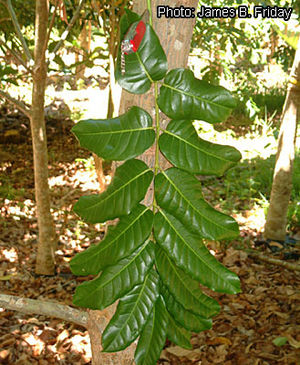 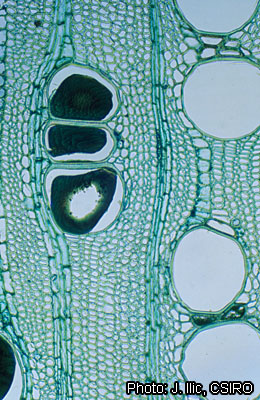 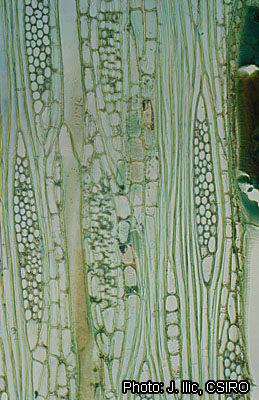 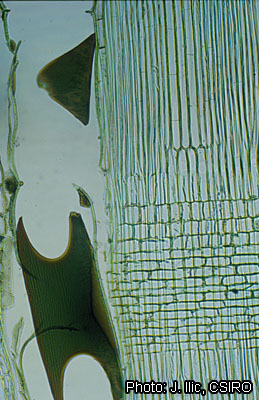 Khaya anthotheca is widespread, from Guinea Bissau east to Uganda and Tanzania, and south to Angola, Zambia, Zimbabwe and Mozambique. It is fairly widely grown in plantations within its natural area of distribution, but also in South Africa, tropical Asia and tropical America.

The bitter-tasting bark is widely used in traditional medicine. It is taken to treat cough, whereas bark decoctions or infusions are taken to treat fever, colds, pneumonia, abdominal pain, vomiting and gonorrhoea, and applied externally to wounds, sores and ulcers. Pulverized bark is taken as aphrodisiac and to treat male impotence. In Tanzania root decoctions are drunk to treat anaemia, dysentery and rectal prolapse. In Tanzania the bark has been used by the Shambaa people for reddish brown dyeing. In DR Congo the leaves are said to be used for making an arrow-poison.

The heartwood is pinkish brown to deep red and more or less distinctly demarcated from the pale brown, up to 6 cm wide sapwood. The grain is straight or interlocked, texture rather coarse. The wood has an attractive figure with irregular ripple marks.

The wood is medium-weight, with a density of 490–660 kg/m³ at 12% moisture content. It generally air dries easily with little degrade, but the presence of tension wood may cause serious distortion. The rates of shrinkage are moderate, from green to oven dry 2.7–4.1% radial and 5.8–6.4% tangential. Once dry, it is fairly stable in service.

The wood is usually fairly easy to saw and work, although the presence of interlocked grain may cause some difficulties; saws should be kept sharp to prevent a woolly finish and a cutting angle of 20° is recommended. The wood can be finished to a smooth surface, but the use of a filler is required before staining and varnishing. The wood holds nails and screws well, but may split upon nailing, and glues satisfactorily. The bending properties are usually poor. The wood peels and slices well, producing an excellent quality of veneer. It turns fairly well. The wood is moderately durable but can be susceptible to termite and pinhole borer attacks. The heartwood is strongly resistant to impregnation, the sapwood moderately resistant. The wood dust may cause irritation to the skin.

The use of the bark as an anti-anaemic agent has been confirmed in preliminary tests. The tests also showed the presence of iron (16 mg/100 g), copper (0.7 mg/100g) and ascorbic acid. In Cameroon the bark showed anthelmintic activity in calves. Crude seed extracts showed high toxicity in tests with tadpoles. The stem, bark and seeds contain limonoids.

The wood of Khaya ivorensis is very similar to that of Khaya anthotheca. The wood of both species and that of Khaya grandifoliola C.DC. is exported in mixed consignments from West Africa as ‘African mahogany’ or ‘acajou d’Afrique’. The wood of makore (Tieghemella) is similar, but more durable.

Khaya comprises 4 species in mainland Africa and 1 or 2 endemic to the Comoros and Madagascar. It belongs to subfamily Swietenoideae and seems most closely related to Carapa and Swietenia. Khaya species strongly resemble each other in flowers and fruits, and differences are most prominent in their leaflets. Khaya grandifoliola C.DC. is very close to Khaya anthotheca and may even be conspecific. Khaya nyasica Stapf ex Baker f. is often still kept separate from Khaya anthotheca, but can better be considered synonymous.

Khaya madagascariensis Jum. & H.Perrier occurs in the Comoros and northern and eastern Madagascar. The reddish brown wood is highly valued for joinery, implements, carving and traditional canoes. It has been used for supporting columns of traditional palaces in Antananarivo. The bark is used in traditional medicine to treat fever, and it is applied externally to treat wounds and haemorrhages. Khaya madagascariensis grows fairly rapidly and is progressively planted in timber plantations. However, natural populations are under high pressure because of habitat destruction and selective felling, and Khaya madagascariensis is included in the IUCN Red list as endangered.

Young trees have a slender stem and a small crown. Extensive lateral growth starts when the upper canopy of the forest has been reached. In Ghana the average height of seedlings was 2.5 m and average stem diameter 4–4.5 cm after 2.5 years. In Côte d’Ivoire Khaya anthotheca trees planted in the open in the semi-deciduous forest zone reached an average height of 12 m and an average bole diameter of 18 cm after 10 years. However, trees planted in the evergreen forest zone were only 6 m tall and 9 cm in diameter after 8 years. In Malawi planted Khaya anthotheca trees reached a height of 8 m and a diameter of 9 cm after 7 years. Trees may already develop fruits when they have a bole diameter of 18 cm, but abundant fruiting usually starts at diameters above 70 cm. This means that the removal of trees of diameter classes below 70 cm from the forest may result in lack of natural regeneration. Fruits are usually produced in the dry season, from January to March in Côte d’Ivoire and Guinea. Dispersal of the seeds is by wind. The maximum dispersal distance is over 50 m, but about 75% of all seeds are dispersed within 30 m of the parent tree.

Seeds can germinate in full sun as well as in the shade, but natural regeneration may be very sparse in the forest. In DR Congo it was found that seedling survival and height growth were higher in gaps than in the forest understorey, with 59% and 37% survival, respectively, and most seedlings in the forest understorey being stunted. It was also observed that secondary forest resulting on abandoned shifting-agricultural land offers favourable conditions for the regeneration of Khaya anthotheca.

Khaya anthotheca is propagated by seed. The 1000-seed weight is 180–280 g. The seeds are often already attacked by insects while they are still on the tree, and undamaged seeds should therefore be selected before sowing or storage. The seeds can be stored for up to 1 year in a cool and dry place; adding ash to reduce insect damage is recommended. Fungi can cause serious losses of stored seed, with seeds stored at –18°C and 5°C showing higher occurrence of fungi and lower germination rates than seeds stored at 15°C. The seeds are best sown in seed beds in the nursery, they should be covered with only a thin layer of soil, or left partially uncovered. Germination takes 8–35 days. The germination rate of fresh healthy seed is up to 85%, but decreases rapidly under natural circumstances. When seedlings are grown in small containers, they can be planted out when they reach 30 cm and have fully developed compound leaves. Seedlings can also be left in the nursery until they are 1–2 m tall, after which the root system is slightly pruned and leaves stripped off before planting into the field as striplings. In experiments in Indonesia, vegetative propagation by means of cuttings was successful, with a rooting success rate of 75% when growth hormone was applied.

In Côte d’Ivoire Khaya anthotheca has been planted in degraded or secondary forests at a distance of 7–25 m between lines and 3–7 m within the line. Pure plantations have also been established with trees planted at 3 m × 3 m.

In general, Khaya anthotheca occurs scattered and in low densities in the forest, e.g. in southern Cameroon the density is on average 0.02 boles of over 60 cm in diameter per ha and 0.15 m³ of wood per ha, but locally in Liberia densities of 0.3–0.9 boles of over 60 cm in diameter per ha have been recorded. In Côte d’Ivoire 2–5 trees over 10 cm in diameter have been counted per ha. Enrichment planting in natural forest is locally applied in Côte d’Ivoire and Uganda. In Uganda the survival rates were often low, often less than 50%, due to poor silvicultural management. In Côte d’Ivoire Khaya anthotheca trees have been planted under the shade of 2-year-old Leucaena leucocephala (Lam.) de Wit, which suppresses weeds and fixes nitrogen into the soil. Regular thinning of the shade trees in the first years is needed for good growth of the Khaya anthotheca trees. The first thinning of a plantation of 1000 stems/ha is done when trees have reached 15 m in height and 15 cm in bole diameter, to a density of 400–500 stems/ha. The second thinning can be done when trees are 20 m tall and 20 cm in diameter to 200–250 stems/ha, the third at 25 m tall and 25 cm diameter to 125–150 stems/ha and the fourth at 30 cm diameter to 75–100 stems/ha. In Indonesia Khaya anthotheca has been used successfully in the taungya system, with economic benefits through the associated crops (rice, maize, peanuts) after the second year of tree planting. Realistic rotation cycles in natural forest are probably in the range of 60–80 years.

Plantations of Khaya anthotheca may suffer seriously from Hypsipyla robusta shoot borers that kill the main stem of young trees, causing excessive branching and contributing to mortality. Silvicultural techniques, such as overhead shading of saplings, mixed planting and removal of lateral shoots, can reduce damage by shoot borers. Seeds are commonly attacked by seed-boring beetles and eaten by small rodents.

The minimum bole diameter for harvesting of Khaya anthotheca trees in natural forest is 60 cm in Côte d’Ivoire, 80 cm in Cameroon, Central African Republic and DR Congo, and 110 cm in Ghana. The boles are occasionally so large that they cannot be sawn with normal equipment. The high buttresses at the base of the bole often necessitate the construction of a platform before felling can take place, or the removal of the buttresses before felling to recover more timber.

For plantations at an age of 30 years, the annual production is 2–4 m³/ha.

Logs are susceptible to attack by longhorn beetles and should be processed not too long after felling. They may also have brittle heart, and care is needed in felling and sawing operations. The boles float in water and thus can be transported by river.

Khaya anthotheca is included in the IUCN Red list as a vulnerable species because of habitat loss and degradation, and selective felling. It has been proposed for inclusion in CITES appendix I or II, but it has not been listed due to insufficient information on regeneration, extent of plantations and sustainability under current management regimes. Provenance trials in Ghana showed a high heritability for height growth, with the growth of the highest-ranking progenies being twice that of the lowest-ranking one. This may be partly due to some genetic resistance against Hypsipyla robusta attack.

Natural regeneration of Khaya anthotheca after logging is seriously hindered by the low density of adult trees in most forests, the fruit production being largely limited to larger sized trees and the comparatively poor dispersal ability of the seeds. It has been suggested that additional sowing at favourable sites would enhance sufficient regeneration after logging. It has also been suggested that the inclusion of shifting cultivation such as a taungya-like system into management systems may offer possibilities for sustainable management of Khaya anthotheca. However, more research is needed on appropriate management systems in natural forest to ensure sustainable exploitation of Khaya anthotheca. Its fair growth rate makes more extensive establishment of plantations an option, but Hypsipyla attack is a serious drawback. The combined effects of selection of provenances with genetic resistance and appropriate silvicultural practices could have a substantial positive impact on the damage caused by Hypsipyla robusta stem borers.