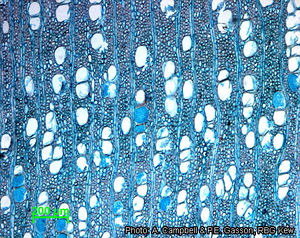 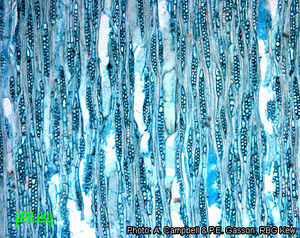 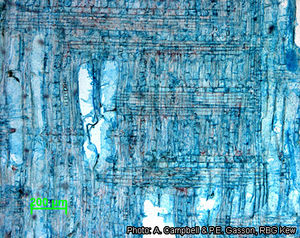 Holarrhena floribunda occurs from Senegal east to Sudan, and south to DR Congo and Cabinda (Angola).

The bark is widely applied in West Africa, in decoction or macerated in palm wine, to treat dysentery and diarrhoea. In Senegal, the roots are used for the same purposes, and are further used to treat stomach complaints, including constipation and colic, to prevent spontaneous abortion, to treat sterility and as a diuretic to treat venereal diseases. An infusion of the leaves is taken to treat diabetes and amenorrhoea. In Sierra Leone the leaves, mixed with kola nut are eaten to treat gonorrhoea. In Guinea Bissau the fruit is used to prepare a remedy for dropsy. The latex is applied to snakebites. The stem bark and leaves are also widely used to treat fever, especially malaria. They are boiled and added to a bath, or taken orally. In Côte d’Ivoire a decoction of the bark is used as an enema or in baths to treat skin affections. The leaf sap is sprinkled on wounds as a haemostatic. The leaves, mashed with those of Myrianthus arboreus P.Beauv. and fruits of Capsicum pepper in water, are applied as an enema against kidney pain. The latex has been used as arrow poison or fish poison. Like other lactiferous plants, it is considered galactagogue for cattle.

The wood is used for carvings, combs, axe handles and small utensils. In Ghana it is considered to be the best white wood available for these purposes. It is usable for packing cases and house construction. The stems are used for the construction of granaries in Benin, as they are easy to work and resistant to the beetle Prostephanus truncatus, a pest of stored grain. The wood is suitable for shaving into wood-wool for packing fruit. Young stems are flexible and can be bent to make handles of walking sticks. The bark yields copious white sticky resinous latex, which is of little use, but can serve as glue. In Guinea Bissau the hair from the seeds is used for filling pillows. In Côte d’Ivoire the trees are retained in cacao plantations to provide shade and fuel wood. In Ghana and DR Congo charcoal is produced from the wood. Edible caterpillars feed on the leaves. Holarrhena floribunda is an attractive tree with white fragrant flowers, and is widely used for ritual purposes.

Holarrhena floribunda yields a large number of alkaloids. The highest concentration is found in the root bark (2–4%), followed by the stem bark (1–2.5%) and the leaves and flowers (less than 1%). Most of the main alkaloids of the stem bark and root bark are steroid alkaloids derived from conanine or the closely related conamine, which also occur in other Holarrhena species. The main alkaloid of the stem bark and root bark is conessine, and minor compounds are norconessine (kurchine), conessimine, kurchamine, conimine, conamine and holarrhenine. The leaves contain mainly steroid alkaloids derived from pregnane, such as holarrhimine, holaphyllamine, holamine and holaphylline, as well as the alkaloid triacanthine (an adenine derivative). The seeds contain conessine, norconessine, conamine and conarrhimine.

Conessine has sedative, central nervous system depressant, cardiac depressant, antipyretic and analgesic activities. It also has significant anti-amoebic activity, but it needs to be used with caution because it can produce neurological problems such as vertigo, tremors, insomnia, agitation or anxiety. Conessine also shows antibacterial and antifungal activities against a range of human pathogens in vitro. The steroid alkaloids present in the stem bark and root bark have hypotensive activity and are simultaneously local anaesthetic and spasmolytic, but they are also cardiotoxic. Triacanthine also has hypotensive activity, but is also cardiotonic, antispasmodic and a respiratory analeptic. In addition, triacanthine stimulates the development of mature red blood cells and acts on experimental anaemia in rabbits. Many of the pregnane derivatives can be used as a starting material for the partial synthesis of pharmaceutical steroids, such as adrenocortical hormones (corticosteroids) and sex hormones (e.g. oestrogens, progestrogens and androgens). Holamine, holaphyllamine and holaphylline show significant anti-inflammatory properties. They cause sodium retention and act as a diuretic in rats. Aqueous extracts of the root bark, stem bark or leaves have relatively low toxicity. A stem bark extract showed significant activity in vitro against several human tumour cell lines. Different extracts of the stem bark have shown significant inhibitory activity against drug-resistant strains of Plasmodium falciparum in vitro. Lupeol long-chain fatty acid esters were isolated as some of the active compounds. Conessine was found to possess a wide range of disruptive activities against 4 insect species, and showed potential as a larval growth inhibitor, sterilant and antifeedant in laboratory tests.

Callus cultures from Holarrhena floribunda tissue produce alkaloids including conessine. Callus derived from root tissue was richer in alkaloids than that derived from stem tissue. Colchicine had a marked positive effect on conessine production.

The wood is soft and white with no distinction between sapwood and heartwood. It works well, is easy to nail, but is perishable and not resistant to termites.

Holarrhena floribunda may become a tree under humid conditions, but remains a bushy shrub in savanna on lateritic soils. It sheds its leaves at the end of the dry season and new leaves appear at the beginning of the rainy season. The flowers appear shortly after the leaves; the flowering period is short. Fruits mature a few months after flowering, but do not dehisce until 3–4 months later. Holarrhena floribunda coppices well and can survive bush fires by producing suckers from burned-down stumps.

Holarrhena floribunda is easily propagated by seed, suckers or small-diameter cuttings. Fresh seed has a high germination rate, but loses its viability after having been stored for a year.

Former cultivation attempts of Holarrhena floribunda in Burkina Faso involved transplantation of plantlets taken from natural populations, but 50% failure occurred because the roots had difficulty piercing the locally present lateritic hardpan. Good results have been obtained with nursery-grown plants planted out at a spacing of 3 m × 3 m in a soil without laterite, preferably with mulching. Shade should be avoided.

In Nigeria larvae of the Saturniid butterflies Imbrasia epimethea and Bunaea alcinoe seriously defoliate Holarrhena floribunda. They are both eaten in DR Congo.

Populations of Holarrhena floribunda in Burkina Faso are extensively harvested for their stem bark. The root bark is difficult to harvest in the hard lateritic soils; therefore harvesting stem bark is preferred, despite its lower conessine content. The stem bark is harvested by coppicing or peeling. Stems of less than 0.5 cm diameter have a low alkaloid content and should be discarded. In case of peeling, bark pieces are vertically stripped from trunks, taking care not to ring the tree and damage the vascular system.

The bark of Holarrhena floribunda is dried for later use or trade. Debarked wood can serve as firewood.

In the relatively dry West African countries, the bark of Holarrhena floribunda is overharvested and the species has become endangered. In the forest zone, it is still widespread and common, and not at risk of genetic erosion.

The steroid alkaloids of Holarrhena spp. might be usable as starting material for the partial synthesis of steroids of pharmaceutical interest, and thus deserve further attention. There is an urgent need to domesticate Holarrhena floribunda or at least develop sustainable harvesting methods of the bark in the Sahel zone to protect the species from local extinction.