distribution in Africa (planted and naturalized) 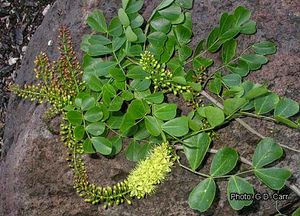 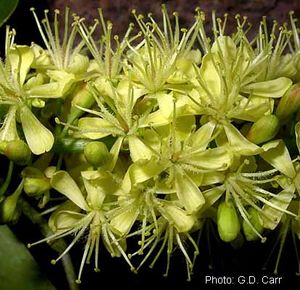 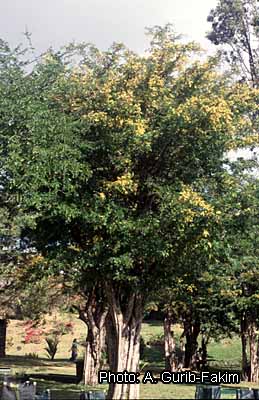 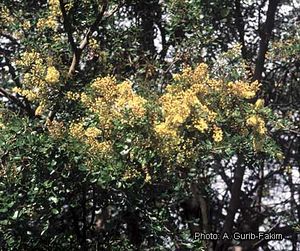 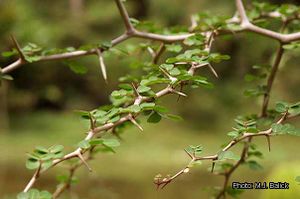 close-up of branches (Ethnobotany and floristics of Belize)

Haematoxylum campechianum is indigenous in Mexico (along the south-eastern coast of the Gulf of Campeche and in Peninsular Yucatan) and Belize. The wood was introduced into Europe as a dyeing substance soon after the Spaniards arrived in Central America, but for many years (from 1581 to 1662) its use in England was prohibited by legislative enactment to protect dyes already in use. After that period British traders started to export the wood from southern Yucatan, where they founded a colony that is now Belize. The representation of two logwood cutters in the national emblem of Belize still reflects the former importance of the trade. The French later established their own source of logwood in Haiti. Haematoxylum campechianum has been introduced and widely naturalized since the 18th century in the Bahamas, Cuba, Jamaica, Dominican Republic, Puerto Rico and the Antilles. At present it is widely introduced in most tropical countries. It was introduced into Nigeria in the 1890s and has since been cultivated on a limited scale in other parts of continental Africa and in the Indian Ocean islands. It is found naturalized in Madagascar and other Indian Ocean islands.

The main product of Haematoxylum campechianum is the heartwood, which is the logwood of commerce. The principal interest lies in the dye substance extracted from this wood: the chemical haematoxylin, a sweet, colourless crystal. It gives the wood its characteristic reddish colours by the combined action of oxygen from the air and alkaline bases present in the wood. Dark purple scales of haematein are formed by the action of ammonia and oxygen from the air during processing of the wood. Haematein is the colouring agent and is used commercially for dyeing wool, silk, cotton, fur, leather, bone and certain synthetic fibres (e.g. nylon and rayon), using chromium mordants to obtain purple and black. It has a fair degree of fastness and good penetration. By selection of different mordants, subtle colour tones ranging through lilac, violet, blue, grey to black can be produced and other shades and colours can be achieved by admixture of other dyes. Haematein is much used in ink, both for writing and painting. In an acid environment it gives a red colour that has been used to adulterate wine. Haematoxylin is the most important natural dye in histochemistry. Heidenhain’s iron haematoxylin method has been traditionally recommended for staining intestinal protozoa. In this method haematein reacts with ferric ammonium sulphate to produce ferric lake (iron haematoxylin) which regressively stains mitotic figures in protozoa. Haematein is a standard histological stain mostly used in combination with eosin, whereby haematein shows up cell nuclei and eosin the protoplasm.

Being rich in tannins, decoctions of the bark are used in Senegal and Mauritius against diarrhoea, and an infusion of the flowers is used against bronchial problems. Extracts have been used in traditional medicine as an astringent, anti-inflammatory agent and to treat gastric disorders.

Haematoxylum campechianum is also an ornamental with evergreen showy foliage and yellow, sweet-scented flowers. The plant is thorny and makes an impenetrable but attractive hedge. In the islands of the Indian Ocean, particularly Rodrigues, the tree is grown and highly prized by bee keepers as its flowers impart a distinctive flavour and fragrance to the honey produced locally. Logwood has been used as timber (e.g. in Senegal for furniture and in India for inlaid veneer), but this use is limited because of the usually irregular shape of the trunk. It is also an acceptable firewood.

The annual export of logwood peaked in the latter half of the19th century at about 100,000 t. In 1880 the imports of logwood into the United Kingdom stood at about 70,000 t. Nowadays, logwood cutting is only a minor industry and to reduce costs logwood is exported mainly as powdered extracts. The best qualities of logwood come from Campeche (Mexico), but only in small quantities; larger amounts of good-quality logwood are exported from the larger Caribbean islands (Jamaica, Haiti, Dominican Republic). In the course of the 1990s the total annual logwood trade was no more than 600 t of extracts, corresponding to about 2500 t of source wood. The major importers are Western Europe, North America and Japan. France and Switzerland supply many consuming countries through re-export trade. Prices have fluctuated enormously over the years.

The heartwood of Haematoxylum campechianum contains approximately 10% haematoxylin and is pale coloured but acquires a bright reddish colour with age or on exposure to air. Haematoxylin crystals are readily soluble in hot water and alcohol, sparingly in cold water. The action of ammonia and oxygen from the air causes dark purple scales of haematein (haematoxein) to form, often observable as the fine greenish hue on logwood chips. The action of diluted acids changes the dark purple colour to bright red. Mordants are necessary to dye textiles with haematein and different mordants give very different colours: copper sulphate gives a purplish blue, zinc sulphate dark purple, nitro-muriate of gold orange, muriate of quicksilver orange-red, muriate of antimony crimson, lead acetate blue, arsenate of potash deep yellow, nitrate of barytes brownish purple and muriate of barytes reddish purple.

Haematoxylin has the unique capacity to distinctively dye crystals of stereoisomeric compounds, making their difference visible to the naked eye. Haematoxylin exhibited dose-dependent anti-inflammatory activities in tests with rats and chicken embryos. It showed a considerable effectiveness against acute inflammation, but little activity against chronic inflammation.

The heartwood is very hard and heavy, with an air-dry density of 950–1085 kg/m3. The grain is interlocked, texture coarse but fairly even. The wood has an agreeable odour resembling violets and a sweet astringent taste. It is brittle and difficult to work by hand, but finished to a smooth surface it takes a high polish. It is durable in contact with the ground and in exposed conditions. The sapwood ring is thin, white or yellow and is of little value as it does not contain haematoxylin. Several gallotannins and flavonoids have been isolated from the leaves.

The wood of Caesalpinia species contains brazilin, which is a compound also used as a red dye and related to haematoxylin. Brazilin has anti-inflammatory properties similar to haematoxylin.

In the 1970s a shortage of haematoxylin in the world market led to a search for alternative dyes in histology. Celestine blue B and Mordant blue 3 were reasonable alternatives, but did not have the wide variety of uses of haematoxylin.

Two other Haematoxylum species are known: Haematoxylum brasiletto H.Karst. (peachwood) from tropical America, the wood of which is also used as source of a red dye (brazilin) considered inferior to the dye of logwood, and Haematoxylum dinteri (Harms) Harms, a shrub up to 2 m tall, endemic in Namibia in rocky crevices and sandy river beds.

Haematoxylum campechianum grows slowly but cultivation is easy. With favourable growing conditions, the tree can attain harvestable size in about 10 years, and sometimes harvesting can even start when 8 years old.

Haematoxylum campechianum is a lowland species which can grow under different conditions. It can withstand dry conditions, but in Central America it grows best in flat marshy areas often inundated by rivers, occasionally forming almost pure stands. In the West Indies, the best wood is produced in interior valleys and moist coves in the lower slopes of hills. In Jamaica logwood is common on exposed limestone hillsides in dry secondary thickets. In Madagascar and the Mascarene islands it occurs naturalized in disturbed vegetation and roadsides in dry regions. Logwood grows on almost any soil, but prefers light soils with some humus.

Apart from weed control during the establishment phase, logwood requires minimal attention. In the early years of a plantation, annual or short perennial understorey crops can be grown.

In Central America logwood is mostly collected from the wild. The older the tree, the richer the colour of the wood. In trade, freshly cut wood with non-oxidized haematoxylin is preferred. Commercial production of Haematoxylum campechianum comes from plantations (e.g. in Jamaica), where the trees can be pruned to produce a straight clean bole. Felling is normally done at 10 years old. The wood, deprived of its bark and sapwood, is transported to the factory or market in the form of large blocks and billets 1–2.5 m long.

The pieces of wood are reduced to very small chips, which are boiled in hot water to extract the dye. The resulting orange-red solution turns yellow and later black upon cooling. Evaporation of the liquid leaves behind a powder, often called crystals. The crystals are graded according to the degree of oxidation of haematoxylin to haematein, usually over a range of 15% to 100%. An 80% grade contains 80% haematein and 20% haematoxylin.

Although there are no specific data on the genetic variability of Haematoxylum campechianum, the wide variation in habitat and the existence of plants lacking haematoxylin (called ‘bastard logwood’) suggest considerable variation within the species.

Breeding objectives are selection of superior genotypes that can be used for propagation, e.g. plants with high dye content, good growth performance and good climatic adaptation.

In major dyeing applications, logwood has increasingly been replaced by synthetics because of periodic supply problems and related price rises. However, the special qualities of the dye remain highly regarded, especially in histology, and the threat of complete replacements by synthetics is not yet evident. Considering the recent renewed interest worldwide in natural colorants, it may be assumed that the demand for logwood is likely to increase. Experiments on a larger scale cultivation of logwood in tropical Africa, e.g. in agroforestry systems, might be worthwhile.