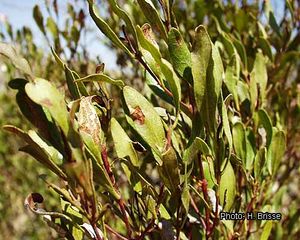 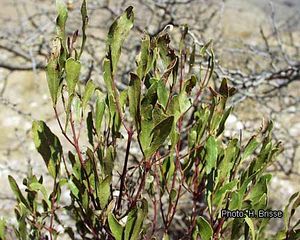 Euclea divinorum is widespread from Sudan and Ethiopia to Namibia, Botswana and South Africa.

The bark of Euclea divinorum is collected from the wild and used to produce fast reddish-brown dyes, and for tanning hides and skins. Dyeing is important e.g. in Botswana, where strips made of the young leaves of the palm Hyphaene petersiana Mart. used in basket weaving are coloured various shades of brown. Depending on how long the fibre to be dyed is left in the boiling dye extract, the colour obtained can range from pale to dark brown or black. In Tanzania and southern Africa, the roots are pounded and boiled to dye the various vegetable fibres used in the weaving of mats into various shades of brown and even black when a mordant of iron-rich mud is applied after dyeing. When used to dye wool, the roots give a wide range of brown colours. Leather produced by tanning with Euclea divinorum bark has a deep red colour due to the numerous naphthoquinones present in the plant. The bark provides an attractive alternative to black wattle (Acacia mearnsii De Wild.) and other available tanning barks.

In East Africa an infusion of the bark is used as a condiment in the preparation of a fatty meat and milk soup. The thin fleshy part of the fruits is edible, but not very palatable; fruits are taken as a mild laxative, but can have strong purgative action. The fruits are used as a purple dye for basket fibres by the Kwanyama Ovambos of northern Namibia and also boiled to produce purple ink. They are applied in the fermentation process to make beer. The roots and twigs are popular as toothbrushes and roots are chewed as a disinfectant and to colour the lips and mouth red. In East Africa the wood is used for tool handles and carving, and as firewood. In traditional medicine root extracts and dried powdered roots are applied for the treatment of gastro-intestinal disturbances, cancer, ulcers, wounds, arthritis, miscarriage, jaundice, snakebites and gonorrhoea. The Shangaan people apply ground roots on the skin against leprosy and to relieve headache and toothache. In western Kenya Euclea divinorum is one of the species used in the treatment of milk to increase its digestibility, palatability and preservation; sometimes treated milk can be stored for over a year without turning bad, which is vital to the household food security. In south-western Ethiopia Euclea divinorum is used to purify drinking water by adding branches to the gourds or pots and leaving them to soak in the water for several hours. Occasionally, Euclea divinorum serves as an ornamental and shade tree.

Bark, roots, twigs, fruits and wood of Euclea divinorum are collected from the wild and traded only locally; they do not enter international trade. Twigs and roots for use as toothbrushes are often sold on local markets.

The bark of Euclea divinorum has a high tannin content. Analyses of bark collected in Tanzania revealed a total phenolic content of 122–148 mg/g, a water soluble phenolic content of 77–87 mg/g and a tannin content (measured by protein precipitation) of 94–95 mg/g. The tannin/non-tannin ratio among extractable phenolics is 2.4 and compares well with the most promising eastern African acacias in terms of tanning potential. Dried bark, boiled for 1.5 hours in water, yielded a tannin liquor with a strength of 7 Bé (specific gravity (s.g.) 1.0501, using a Baumé hydrometer). The best result for other locally available barks was obtained from Acacia nilotica (L.) Delile: it reached only 3 Bé (s.g. 1.0209). For tanning 2 Bé (s.g. 1.0138) is sufficient, but the advantage of the higher strength reached with bark of Euclea divinorum is that less bark is necessary to tan a given quantity of hides or skins to leather.

The root-bark of Euclea divinorum contains a rich combination of dyeing compounds making this species an interesting fast dye that can be used with or without the addition of metallic salts as mordants, due to the mordanting effect of the tannins present in the plant. Research on the root-bark done in Zimbabwe resulted in the isolation of naphthoquinones and napthoquinone dimers and trimers: 7-methyljuglone (juglone being the main colorant in walnuts, Juglans species), isodiospyrin, and flavonoids which contribute together to the dyeing properties of the plant. Triterpenoids were also isolated. One of the triterpenoid compounds and 7-methyljuglone showed cytotoxicity, the latter against a wider range of cell lines than the former. Chemical investigation of the aerial parts of Euclea divinorum done in Ethiopia resulted in the isolation of 4 flavonoid compounds: (+)-catechin, glycosides of aromadendrin, quercetin and myricetin.

Some evidence exists that twigs of Euclea divinorum used as a toothbrush not only clean the teeth but also inhibit growth of teeth-attacking bacteria because of their high polyphenolic content.

The wood is white with brown spots and is heavy, hard and strong. The sapwood is pinkish to cream-coloured, turning apricot colour on exposure to air.

Euclea comprises about 12 species and is confined to Africa and Arabia. South Africa is richest in species. Euclea divinorum is less variable than other Euclea species. Specimens intermediate between Euclea divinorum and Euclea crispa (Thunb.) Gürke (synonym: Euclea lanceolata E.Mey ex DC.) are common in southern Africa and are probably hybrids. Euclea crispa is used for dyeing mats and for tanning in Malawi (its root bark contains 7-methyljuglone and 4 naphthoquinone dimers), but it is more important as a medicinal plant. Euclea natalensis A.DC. (distributed from Kenya and DR Congo southwards to South Africa) has dye and tannin uses similar to those of Euclea divinorum, but is primarily used in traditional medicine. The quinones so far isolated from Euclea natalensis include 7-methyljuglone and methylnaphthazarin, the naphthoquinone dimers diospyrin, isodiospyrin, biramentaceone, mamegakinone, natalenone, 8’-hydroxydiospyrin and euclanone and 2 trimers, galpinone and another compound of still incompletely elucidated structure.

In the basket weaving industry in Botswana, in addition to Euclea divinorum, the bark of Berchemia discolor (Klotzsch) Hemsl., leaves of Indigofera species and fungus-infested Sorghum husks are also used for dyeing the fibre materials, respectively giving shades of brown, mauve and pink.

Euclea divinorum occurs in grassland with scattered trees and open bushland, often on termite mounds, but also in secondary forest, margins of evergreen forest and on stony slopes, from sea-level up to 2700 m altitude. It is moderately tolerant of heavy metals, tolerating high concentrations of nickel, but only relatively low levels of copper, and often becomes locally abundant on metalliferous soils. It is particularly common on arsenical soils, which are often associated with gold deposits or reefs, and it has been suggested that it may have value as an indicator of the presence of gold. The successional dynamics of Acacia-Euclea savannas appear to depend on the browsing by large mammals. Euclea thickets tend to dominate in savanna areas without elephants.

Although Euclea divinorum is rarely cultivated, it can be propagated by suckers, transplanting seedlings or direct seeding. There are about 30,000 seeds/kg. The seeds are perishable and lose viability within about 2 months. They germinate readily; no pretreatment is necessary. Euclea divinorum has a good coppicing ability and root suckers are common, growing up some distance from the tree.

Euclea divinorum tends to dominate pastures to the detriment of wildlife and pastoralism. In some situations only the use of arboricides can solve the problem.

The tanning liquor is made by boiling the bark of Euclea divinorum in water until the required concentration is obtained (from 2 Bé = s. g. 1.0138 upward). Hides and skins to be tanned are treated with the extract at ambient temperatures. For dyeing, the roots are dug up and beaten to bruise the bark. Approximately equal quantities of fresh roots and palm leaves or other fibres are required. The fibres and textiles to be dyed are simply left for some time in the boiling extract and subsequently dried. Among the Kwanyama Ovambos of northern Namibia, fruits mixed with those of Berchemia discolor, are crushed and boiled with palm leaf strips and the mixture is allowed to stand for one to several days to produce a purplish-brown dye to decorate baskets. Used alone and without mordant, they give a purple colour that is less fast than the darker colour obtained with the mixture.

With its good tanning and medicinal properties, its interesting dye composition and great regeneration power Euclea divinorum is a very useful and promising plant, even growing well on soils polluted with heavy metals. Its bark is considered a high potential tanning material, offering a cheap alternative for black wattle bark in rural pastoral communities. In areas where overexploitation has led to its local disappearance (e.g. in basket weaving centres in Botswana), cultivation is recommended.