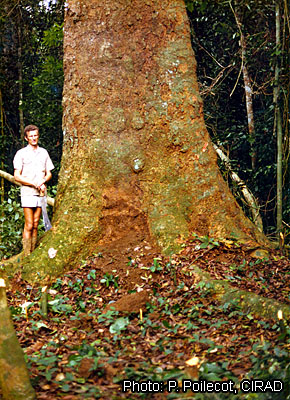 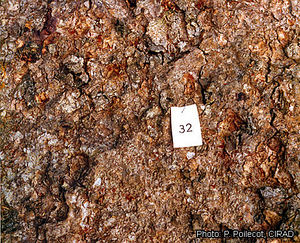 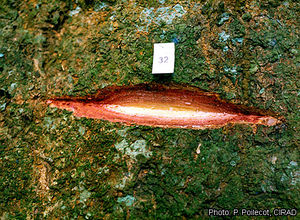 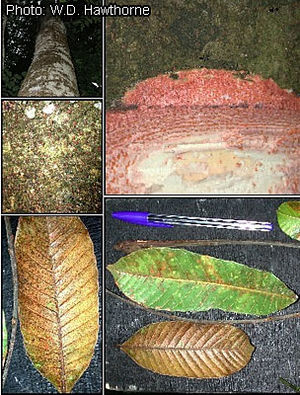 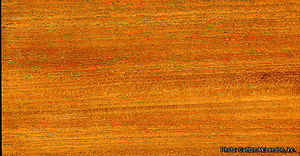 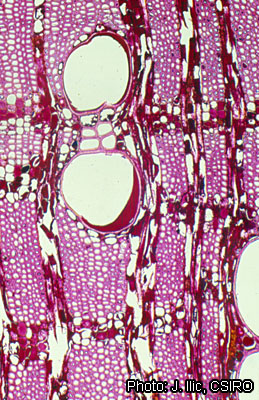 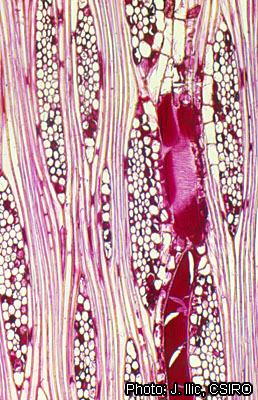 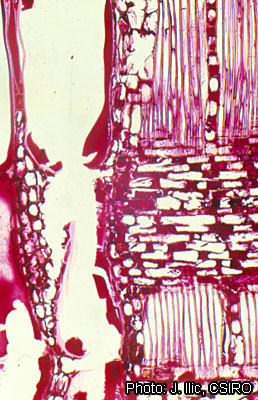 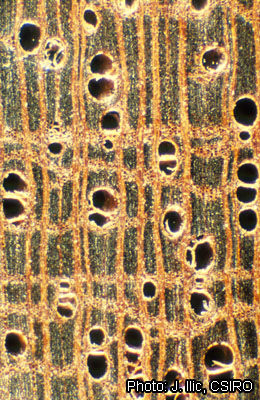 The bark is used in traditional medicine. Bark sap is applied externally as an anodyne, and sap of the root bark is applied to snakebites.

The heartwood is dull brown to dark purplish brown, slightly darkening upon exposure, and distinctly demarcated from the greyish white to pale brown, up to 8 cm wide sapwood. The grain is straight to slightly interlocked, texture coarse and even. Quarter-sawn surfaces are slightly striped.

The wood is medium-weight, with a density of 570–810 kg/m³ at 12% moisture content. It air dries slowly and is liable to distortion. Mild schedules are needed for kiln drying. The rates of shrinkage are medium, from green to oven dry 4.4–5.1% radial and 5.7–7.6% tangential. The wood is usually moderately stable in service, but sometimes unstable; proper drying is needed before use to avoid warping in service.

The wood saws fairly easily although it requires some power, and it works easily with both hand and machine tools. It usually contains silica (up to 0.5%) and has moderate blunting effects on cutting edges; stellite-tipped saw teeth and tungsten-carbide cutting edges are recommended. In planing and moulding operations a 15–20° cutting angle is recommended, especially when interlocked grain is present. It can be finished to a nice surface, but the use of a filler may be required. The wood is not liable to splitting on nailing and screwing, and has good holding properties. The gluing, staining and polishing properties are good when a filler is used. The steam bending properties are poor. The wood is suitable for the production of sliced veneer. It is moderately durable, being liable to powder-post beetle, pinhole borer and marine borer attacks and moderately resistant to termites. The heartwood is resistant to preservatives and the sapwood moderately resistant.

The limonoids prieurianin and epoxyprieurianin have been isolated from the bark. These compounds and their acetates exhibited strong antifeedant activity against the gram pod borer Helicoverpa armigera. Atomasin A and atomasin B are other limonoids that have been isolated. The first compound showed moderate in-vitro inhibitory activity against chloroquine-resistant strains of Plasmodium falciparum. The triterpenoid methyl angolensate has been isolated from the roots.

Entandrophragma comprises about 10 species and is confined to tropical Africa. It belongs to the tribe Swietenieae and is related to Lovoa, Khaya and Pseudocedrela.

Under natural conditions, an average annual diameter increment of 5.1 mm has been recorded for Entandrophragma candollei. In plantations in Guinea trees reached a mean height of 2.7 m after 6 years.

Trees start fruit production at larger bole diameters, and this has implications for forest management; harvesting trees of less than 50 cm bole diameter seriously reduces fruit production. Trees can become very old; for the largest specimens ages of up to nearly 1000 years have been suggested.

In Liberia and Côte d’Ivoire trees are leafless for a short period in October, and they usually flower from November to December. Fruits mature about 5 months after flowering. The seeds are dispersed by wind, although most seeds seem to fall close to the mother tree. In Ghana seeds are produced in the dry season and seed production is rather erratic, with generally one good fruiting every 3 years.

In West Africa Entandrophragma candollei is most common in moist semi-deciduous forest, particularly in regions with an annual rainfall of about 1800 mm. However, it can also be found in evergreen forest.

Natural regeneration is often scarce in natural forest, but gaps created by logging operations may promote regeneration. In natural forest, saplings are most common in gaps. Fresh seeds start to germinate 1 week after sowing and the germination rate is 60–75%. Seedling growth is slow, with a plant height of 13 cm after 5 months and 20–30 cm after 1 year. Seedlings are very sensitive to sun-scald and have to stay under permanent shade in the nursery. During at least 2–3 years after being planted out the seedlings need slight shade to avoid high mortality, for example by a cover of a young secondary forest. Later, clearing is necessary for good growth.

In general Entandrophragma candollei trees occur scattered in the forest, and they are uncommon in many regions within the distribution area, particularly in the western part. In southern Cameroon the average density is one tree of more than 60 cm bole diameter per 15–30 ha, and the average wood volume is up to 0.7 m³/ha. In Gabon Entandrophragma candollei is uncommon and mainly confined to the north-eastern part of the country.

Minimum felling diameters are 60 cm in Côte d’Ivoire, 80 cm in Cameroon, the Central African Republic, Gabon and Congo, 90 cm in Liberia, and 110 cm in Ghana.

Freshly harvested logs may sink in water and cannot be transported by river. However, other logs have a green-wood density of just below 1000 kg/m³ and thus float in water.

Although Entandrophragma candollei is fairly widely distributed, it may become liable to genetic erosion in the near future. The commercial interest in its timber has resulted in extraction of large individuals from the forest throughout the distribution area. It is included in the IUCN Red list as vulnerable.

Although the wood of Entandrophragma candollei is slightly less valued than that of other Entandrophragma spp., it is exploited in many regions and most probably not on a sustainable basis. The low growth rates under natural conditions, the long time needed to reach maturity in terms of fruit production and poor dispersal ability of the seed seem to be serious drawbacks. More research is needed on appropriate management measures, but rotation cycles needed to ensure sustainable exploitation in natural forest are probably long.