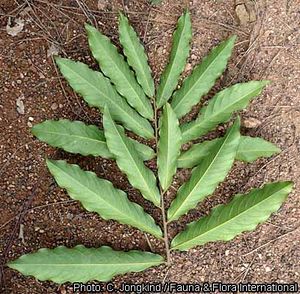 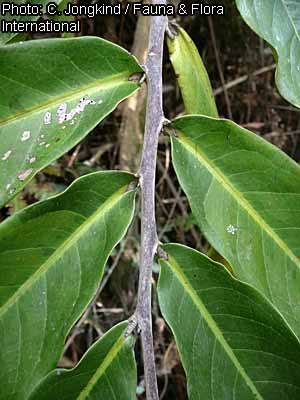 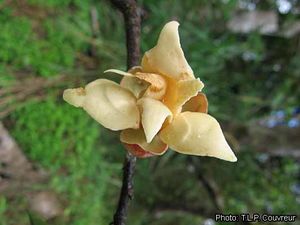 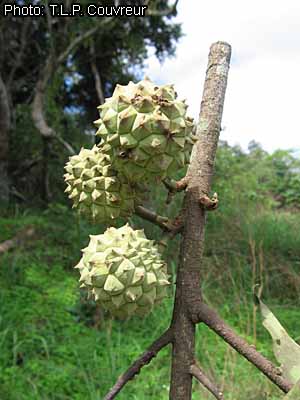 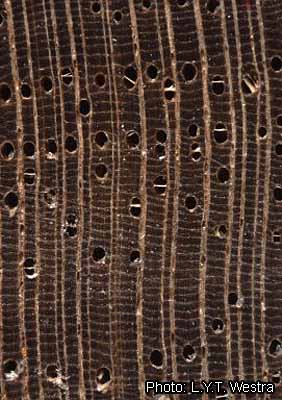 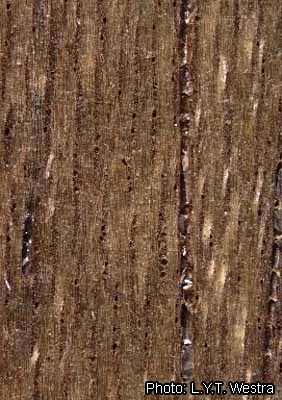 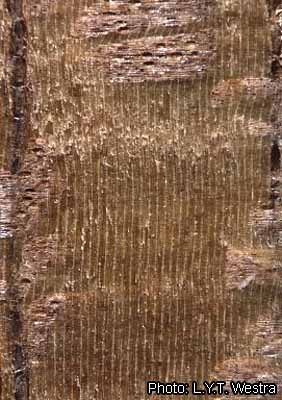 Duguetia staudtii occurs from Sierra Leone east to the Central African Republic and south to Gabon and DR Congo.

The wood of Duguetia staudtii, known as ‘ntom’ in Central Africa and as ‘aniouketi’ in Côte d’Ivoire, is locally used, especially in house construction for poles and planks, but also for carpentry and utensils; it is suitable for flooring, joinery, interior trim, mine props, furniture, cabinet making, toys, novelties, boxes, crates, vats, food containers, turnery, veneer and plywood.

The bark is used in hut construction for walls, partitions and doors. It is commonly used in traditional medicine. Bark decoctions are taken to treat colds, cough and other complaints of the respiratory tracts, and as anodyne, purgative, anthelmintic and aphrodisiac. They are used as mouth wash against toothache, and to wash the hair to get rid of lice. A paste of pounded bark is applied externally to treat smallpox and measles. The bark is also used to treat tumours, oedema, leprosy and gonorrhoea. Pulped bark with cola nut is taken against gastro-intestinal problems. Leaf decoctions are applied in mixtures to wash the body to treat measles. In Côte d’Ivoire stem bark is used as an ingredient in the preparation of arrow poison.

The wood of Duguetia staudtii is only used locally and not or rarely traded on the international market.

The heartwood is pale yellow to yellowish brown or greenish brown, indistinctly demarcated from the slightly paler, up to 8 cm wide sapwood. The wood is susceptible to discolouration to a greyish tinge. The grain is straight, texture moderately coarse.

The wood works easily with both hand and machine tools, and has little dulling effect on cutting edges. It can be planed to an attractive lustrous surface, and finishes smoothly. The nailing and screwing properties are satisfactorily, and the wood glues well. It takes paints and vanish well. The peeling and slicing characteristics are good. The wood is not durable, being susceptible to attacks by fungi and termites, although it has also been reported to be quite resistant to termite attack; the sapwood is liable to Lyctus attack. The wood is moderately easy to treat with preservatives.

The bark and leaves contain alkaloids, mainly isoquinoline alkaloids, and the presence of tannins has been reported in the bark and roots. Some bisnorlignans have been isolated from the bark, as well as the flavonol pachypodol, which has potent antiviral activity against poliovirus. Crude bark extracts killed microfilariae and adult females of Onchocerca volvulus, the causal organism of river blindness; oliverine was identified as active compound. 2,4,5-Trimethoxystyrene has been isolated in larger amounts from the bark. This compound is toxic to brine shrimp, but showed only weak cytotoxic activity. It showed significant insecticidal activity against Callosobruchus maculatus, a pest in stored cowpea, and Sitophilus zeamais, a pest of stored maize. The essential oil from the bark contained more than 70% of 2,4,5-trimethoxystyrene, and the oil showed in-vitro activity against Plasmodium falciparum. Ethanol bark extracts showed high toxicity in tests with rats. Bark extracts showed antifungal activity against Candida albicans and Cladosporium cucumerinum.

Duguetia comprises about 90 species, with the majority in tropical America and 4 species in West and Central Africa. The African species have been considered to belong to a separate genus Pachypodanthium, but the results of a cladistic analysis based on morphological and anatomical data published in 1998 led to inclusion in Duguetia.

Duguetia confinis (Engl. & Diels) Chatrou (synonym: Pachypodanthium confine Engl. & Diels) is a medium-sized to fairly large tree up to 35(–40) m tall with bole up to 85 cm in diameter, occurring in Cameroon, Equatorial Guinea, Gabon and Congo. It differs from Duguetia staudtii in its densely hairy lower leaf surface with erect stellate hairs and in its ellipsoid fruits consisting of nearly entirely fused carpels. Its wood, with a density of about 710 kg/m³ at 12% moisture content, is similar to that of Duguetia staudtii and used for similar purposes, especially in house construction.

In West Africa flowering is most common from February to May and fruits usually appear in July–September, but flowers and especially fruits can be found nearly throughout the year. Ripe fruits fall apart in separate carpels and are eaten by monkeys and birds, which may serve as seed dispersers.

Duguetia staudtii usually occurs rather scattered in closed evergreen and dense riparian forest, up to 900 m altitude. It can be found in primary as well as secondary forest. It prefers sandy localities. In Gabon it has been reported to form occasionally nearly pure stands in seasonally flooded sites.

There are about 4500 seeds per kg. Seeds start germinating 2–4 weeks after sowing. The germination rate is generally high. Natural regeneration of Duguetia staudtii occurs in not too dense shade; the species is considered to be a non-pioneer light demander.

Logs should be removed rapidly from the forest after felling because they are susceptible to attacks by fungi and insects, and the wood is liable to discolouration.

Duguetia staudtii is fairly widespread and there are no indications of over-exploitation, and therefore it does not seem to be threatened by genetic erosion.

Duguetia staudtii provides a good-quality timber that can be used for various purposes, and that could be interesting for the international market. Its usually straight and cylindrical bole may offer good possibilities for veneer production by peeling. However, more information is needed on its natural regeneration and growth rates to ensure sustainable exploitation. Further research with regards to potential drug development is warranted because several of the uses of the bark in traditional medicine have been supported by pharmacological screening.