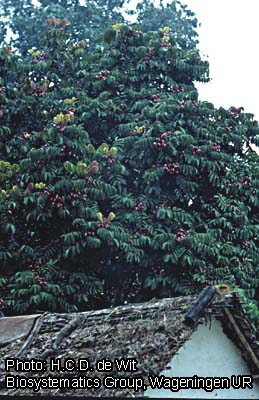 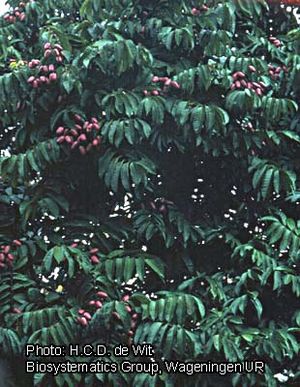 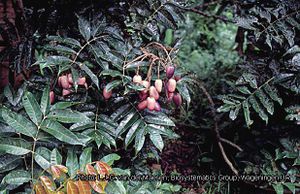 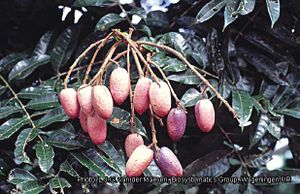 close up of fruit branch 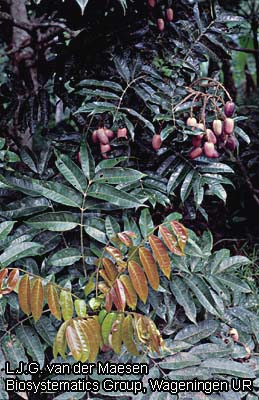 Dacryodes edulis occurs naturally in the countries bordering the Gulf of Guinea. It is grown from Sierra Leone to Angola along the Atlantic and further inland as far as Uganda; it has also been recorded in northern Zimbabwe. The exact natural area of distribution is obscure because Dacryodes edulis is much cultivated and naturalized.

Butter fruit tree is one of the main tree fruits throughout much of its area of distribution. The oil-rich pulp is eaten after softening by immersion in boiling water for 2–3 minutes, or by heating over embers or a hot plate. A common preservation method is to remove the seed from the fruit, boil the pulp and dry it in the sun.

Concoctions of the leaves are ingested to treat disorders of the digestive tract, toothache and earache. The bark is used to cure dysentery and anaemia, root bark against leprosy; the resin extracted from the bark heals scars and other skin problems. An oil suitable for cosmetics and food can be extracted from the fruit, but this is not yet done commercially.

Dacryodes edulis is a useful shade tree in coffee and cocoa plantations. The wood is reported to be nearly as good as African mahogany (Khaya), but is nevertheless mainly used as firewood. It is comparable to that of Dacryodes buettneri (Engl.) H.J.Lam, which is more commonly exploited commercially. Nectar from the flowers yields a much appreciated honey.

Farm surveys indicate that trees are found on 50–100% of the farms in 7 states of south-eastern Nigeria and on 80–94% of the farms in the humid lowlands of Cameroon, mainly in home gardens, tree crop fields and swidden fields; they are also common in highland areas. The average price in different states of Nigeria ranged widely from US$ 0.03–0.60 per kg of fruit (1994). Home consumption accounts for about 60% of production. In the first half of 1995 nearly 600 t, valued at US$ 244,000, was traded in the humid lowlands of Cameroon. The fruit is a very common sight in Cameroonian market places; much of it is traded across borders into neighbouring countries, e.g. to Gabon, partly because the fruit ripens from June–November north of the equator and from December–April south of it.

The fruit flesh is softened by cell-wall-degrading enzymes. At temperatures of 60–85°C this is accomplished in a matter of minutes; at room temperature it takes 7–10 days, with bruising and microbes reducing this period to 3 days. Boiling inactivates the enzymes so that the pulp hardens.

The oil content of the fruit pulp is very high: 30–60% on a dry matter basis. Oleic acid (45–60%), palmitic acid (30–35%), linoleic acid (15–20%), and stearic acid (2%) constitute about 95% of the pulp oil. When left standing the oil separates into a semi-solid lower layer and a liquid upper one. The fatty acid composition of the 2 layers is similar. The unsaponifiable fraction of the oil represents about 2%, and consists mainly of sterols (20% - mainly sitosterol), triterpene alcohols (34%) and small amounts of tocopherols.

Unlike other oily fruits, the seed oil (content per 100 g dry matter: 10–15 g) is of the same type as the pulp oil, so for extraction it is not necessary to separate pulp and seed. The resulting cake can serve as animal feed.

The wood is yellowish-pink, moderately heavy (density about 600 kg/m³ at 12% moisture content) and moderately elastic; texture moderately coarse. Drying does not usually give problems except for thin boards. The wood is somewhat difficult to work due to the presence of silica, rapidly blunting tools during sawing. Planing may be problematic due to the interlocked grain. The staining, polishing and gluing properties are good. The timber can be peeled satisfactorily.

Dacryodes comprises about 40 species, occurring in the American, Asian and African tropics. In Africa, about 20 species have been found, all of section Pachylobus; Gabon seems richest with approximately 10 species. Several species have edible fruits. Dacryodes edulis is very variable. Two varieties are recognized: var. edulis and var. parvicarpa J.C.Okafor, the latter being characterized by smaller conical fruits and thin pulp. Branching in var. edulis is often verticillate or subverticillate, in var. parvicarpa it tends to be opposite or bifurcate.

Seed of Dacryodes edulis is recalcitrant; its germination rate drops sharply unless its water content (42% of fresh weight) can be maintained. Unless sown within a week, germination and vigour are greatly reduced. Germination starts about 2 weeks after sowing and is epigeal. Early growth is vigorous. The seedling grows rhythmically, extending by flushes. During a flush, the leaf form changes abruptly from cataphylls (0–3 per flush) to normal leaves (with 11–19 leaflets). The flush is usually brought to an end by the sudden transition from normal leaves to severely reduced leaves in which only one or two basal pairs of leaflets are extended. Older trees flush infrequently. Branching normally is effected through shoots in the leaf axils of the last flush.

In adult trees, inflorescences may take the place of the axillary shoots, but often the entire shoot tip becomes floriferous, only the apical bud remaining vegetative and capable of producing another flush. The tree conforms to Rauh’s architectural model: a monopodial architecture, orthotropic branching, and an endogenous growth rhythm characterized by alternating phases of active growth and rest.

The juvenile period lasts 4–6 years. Trees are either strictly male- or female-flowering. However, trees with hermaphrodite flowers associated with male flowers have also been reported. Whereas each tree flowers for about one month, the tree population blooms over a three-month period. Flowers open in the morning. Pollen is shed within 1–2 hours, so pollination has to be effected quickly. A strong perfume and agglutinate pollen facilitate pollination by insects, which are rewarded by nectar. About 80% of the visiting insects are bees. Pollination trials indicate that the viability of the pollen is excellent, that there are no problems with incompatibility, and that hand pollination does enhance fruit set but not the number of fruits at harvest. The fruit matures about 5 months after flowering.

The butter fruit tree is very adaptable, at home in evergreen rain forest, gallery forest and marshes. It grows from sea level to elevations of 1000 m, and from the high rainfall areas on the slopes of Mount Cameroon to monsoon areas that have 4 months with less than 50 mm/month of rainfall. The tree population flushes and flowers during the dry season. This means that flowering reaches a peak in January or February north of the equator, whereas south of the equator most trees flower in August or September. In coastal Gabon the flowers appear towards the end of the 3-month dry season, providing a cue that the planting season for field crops has started. However, near Bitam in northern Gabon the dry season lasts only 2 months, and this is too short to impose simultaneous flowering, and fruiting trees may be found at any time of the year. Much of the Gulf of Guinea region has a bimodal rainfall distribution and in some trees flowering is triggered by the short dry spell. For these reasons some fruit is harvested most of the year in several areas, but the main season is June to November north of the equator and December to April south of it. There is no information about soil types preferred by the crop, suggesting that soil requirements are not very exacting.

The butter fruit tree is normally raised from seed, preferably freshly extracted from the fruit as viability declines rapidly when seed is stored. In the mature fruit the radicle has already emerged from the seed. Cloning is to be greatly preferred, not only to obtain plants of known sex, but also because the species is very variable. Vegetative propagation is difficult, but air layering has proved successful (up to 80% take) and is now practised in a few areas, using selected mother trees. It takes 4–6 months before the layers can be separated and this should not be done when the mother tree is about to flush. Plantlets have been obtained by tissue culturing of cotyledons. In laying out an orchard, 5% of the trees should be male-flowering to ensure adequate cross-pollination.

Care for the trees is minimal, often limited to slashing the weeds around each tree. Manures are not used except when planting; pruning and crop protection are not practised.

In Gabon, 33 disease agents have been recorded on the butter fruit tree, mainly polyphagous fungi. The symptoms range from dieback of branches and leaf and fruit drop, to necrotic spots and galls on leaves and fruit. A study in Nigeria showed that 35–65% of the fruit were attacked by four post-harvest rots; Botryodiplodia theobromae and Rhizopus stolonifer were most important, accounting for 80% of the affected fruit; Aspergillus niger and an Erwinia bacterium being the other causal organisms.

A dipterous insect that mines the young leaves leads to continuous growth of the shoot because the leaflets drop before they mature. In Congo, the most important pest, leading to a burnt appearance of the leaves, is the caterpillar of Sylepta baltoata, a pyralid moth. In Cameroon, the larvae of a Carpophilus sp., a nitidulid beetle, eat the seed and when the adult bores its way out of the fruit secondary infections often lead to decay. Much fruit is spoilt on the tree by birds.

The fruit is ready for harvest when the colour changes, usually from pink to bluish. The seed is then also sufficiently mature to ensure maximum germination levels. Ripe fruit eventually drops but bruised fruit softens unevenly and decays quickly. Usually fruit is harvested by climbing the tree and beating the branches, or cut with the aid of a long pole fitted with a cutting device.

Most farmers report yields of 20–50 kg of fruit per tree. A sample of 20-year-old trees yielded 110 kg per tree, far exceeding the yield of younger and older trees. For an orchard with 100–200 female-flowering trees per ha, annual yields of 10 t/ha or more appear feasible. There is no information on yield levels in areas where the growth rhythm is not synchronized, nor about biennial bearing.

The fruit is gathered in baskets and taken to market. Packaging should be well ventilated, e.g. net bags or slotted crates. Post-harvest losses are large (locally exceeding 50% of the fruit) due to bruising during harvest and transport, and microbial rots.

The variability of the species has led to selection and cloning of superior trees for collections (Gabon, Cameroon) and for use as mother trees for propagation by air layers (Congo). However, no germplasm collections are known to be maintained.

There is a bright future for a fruit which is generally esteemed for its health benefits as well as its taste. More detailed knowledge of floral biology of this dioecious species, selection, and standardized vegetative propagation methods, are the main prerequisites for a breakthrough in productivity; more care in harvesting and handling will further increase the market value of the crop. Higher yields will also improve the economics of oil extraction, which – for a cottage industry – is already profitable at 10 t/ha. More attention for suitable applications of the wood seems justified.