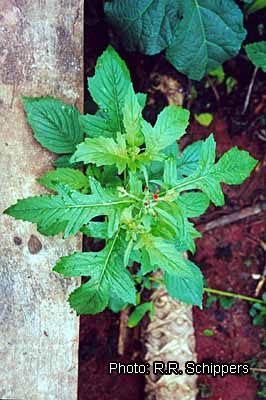 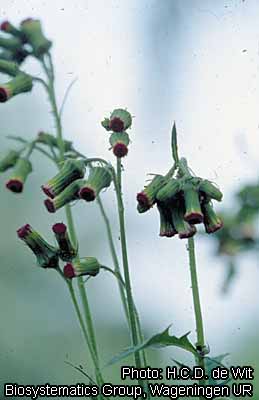 Crassocephalum crepidioides occurs throughout tropical Africa, from Senegal east to Ethiopia and south to South Africa; it is also found in Madagascar and Mauritius. It was introduced and naturalized throughout tropical and subtropical Asia, Australia, the New Hebrides, Fiji, Tonga and Samoa, and locally in the Americas. The leafy parts are widely used as a vegetable, e.g. in Sierra Leone, Ghana, Benin, Nigeria, Cameroon, DR Congo and Uganda, and also in Asia.

The tender and succulent leaves and stems of ebolo are mucilaginous and are used as a vegetable in soups and stews, especially in West and Central Africa. It is much appreciated for its special flavour, which is sharp but not bitter. It is especially popular in south-western Nigeria, from where the originally Yoruba name ‘ebolo’ derives. Here the leaves are lightly blanched, excess water is drained off, and the leaves are then cooked with peppers, onions, tomatoes, melon and sometimes fish or meat to make soups and stews. In Sierra Leone the leaves are also popular and are made into a sauce with groundnut paste. In Australia ebolo is eaten as a salad green, either cooked or raw.

In southern Nigeria, the leaves of ebolo are used to treat indigestion. In DR Congo leaf sap is given to treat upset stomach, in Uganda it is used as a treatment for fresh wounds. A leaf lotion or decoction is used to treat headache in Nigeria, and in Tanzania a mixture of the leaf sap of Crassocephalum crepidioides and Cymbopogon giganteus Chiov. is used orally and externally for the treatment of epilepsy. In Tanzania the dried leaf powder is applied as a snuff to stop nose bleeding and smoked to treat sleeping sickness. Tannin found in the roots of the plant is used to treat swollen lips. The plants are readily eaten by livestock, and they are considered a useful green fodder for poultry. Crassocephalum crepidioides has been used successfully as a trap plant to collect adult corm weevils in banana plantations.

Ebolo leaves and shoots are produced principally for local markets in rural and urban areas. In south-western Nigeria they are found most commonly in markets during the rainy season. Statistical data on production and trade are not available.

Crassocephalum crepidioides extracts showed moderate antimutagenic activity in Salmonella typhimurium. The roots have been reported to contain tannin. The pyrrolizidine alkaloids jacobine and jacoline were isolated from the aerial parts of Japanese plants; jacobine proved to be hepatotoxic. Geotrichum, an endophytic fungus of Crassocephalum crepidioides, produces dihydroisocoumarins that have shown antimalarial activity against Plasmodium falciparum. Essential oil obtained by hydrodistillation of the leaves consisted mainly of monoterpenes (myrcene, limonene and α-copaene).

In tropical Africa Crassocephalum comprises about 24 species, many of which have medicinal uses. The genus is placed in the tribe Senecioneae.

Crassocephalum crepidioides is a common weed in abandoned farm land, waste places, plantations and backyard gardens, in East Africa up to 2000 m altitude. It may be a dominant pioneer species in shifting cultivation sites that have been recently burned. The temperature requirement of ebolo is 23–30°C, and an annual rainfall of 600–1500 mm is suitable. It prefers well-drained, rich soils and tolerates wet soil, but not waterlogged conditions. It grows well under shade in plantations, e.g. cocoa or tea.

Ebolo produces seeds (achenes) profusely. The weight of 1000 seeds is about 0.2 g. The seeds are difficult to process and preserve. Due to the fine silky pappus hairs covering the achenes, they are easily dispersed by wind. Removing the pappus is possible when the fruits are fully ripe, but before they spread naturally. Seedlings are normally raised in nurseries in specially prepared cool spots. Direct sowing is less common. The seeds are broadcast on the seedbed and watered twice daily. The seedlings are transplanted with a ball of earth attached and are planted on raised beds when they are 8–10 cm tall at a spacing of 30 cm × 30 cm. Transplanted crops produce vigorous plants with large leaves.

Ebolo grows well in soils rich in organic matter. In general application of organic manure before transplanting promotes rapid growth, production of large leaves and overall vegetative yield. As an alternative NPK fertilizers (e.g. 15–15–15) may be applied. Weeding is required when the seedlings are young and regular irrigation is important during dry periods.

Rust infection of ebolo caused by Aecidium crassocephali can be serious and sometimes leads to the death of the plant. A grey leaf spot (Cercospora) causes spots on the upper leaf surface and mould on the lower side. The green larvae of the moth Psara pallidalis constitute serious problems by causing the leaves to curl and by eating between the leaf veins. The black larvae of the moth Lobesia aedopai infest the inflorescences of young plants, feeding on the inside, especially on the receptacle. Slight leaf damage is caused by Lagria villosa and Chrysolagria sp. throughout the year. Variegated locust (Zonocerus variegatus) is a problem during the dry season, infesting the leaves. High population densities of green aphids may infect the apical growing point of young plants. In Nigeria the larvae of Nyctemera perspicua (synonym: Deilemera perspicua) and Sylepta derogata were recorded as destructive to the leaves, whereas adults and nymphs of Aphis spiraecola attack the leaves and stems.

Annually considerable amounts of ebolo are harvested from the wild. In planted fields harvesting is by uprooting or repeated cuttings. The first harvest by uprooting can be expected 5–6 weeks after transplanting, and the first harvest by cutting is carried out when the plants are 20–25 cm tall. The shoots are cut at 8–10 cm above the ground to allow profuse production of new shoots. Repeated cutting is carried out at intervals of 7–14 days, depending on plant growth and vigour. This can be done for 40–50 days. Harvesting is often done in the evening or early morning to keep the leaves fresh for the market.

The annual production of ebolo may reach 25–27 t/ha of leaves and shoots from repeated harvesting.

The leaves wilt fast, thus repeated sprinkling with water is required to keep them fresh. The shoots can also be partially immersed in water in small buckets. Farmers often tie the shoots into small bundles before they are taken to the market.

There is no threat of genetic erosion of Crassocephalum crepidioides as it is widespread and common in disturbed habitats. There is considerable variation among landraces. There are no records of germplasm collections in Africa.

Ebolo is a vegetable of low priority to researchers in Africa. The wide genetic variation is yet to be exploited, but it will ensure rapid progress in selection and development of improved cultivars.

Crassocephalum crepidioides is an easy to grow vegetable, especially suited to shady localities in home gardens and tree plantations. Breeding of improved cultivars is needed, as well as research to solve the problem of seed availability that has hitherto limited cultivation. Research on its safe use as a vegetable is desirable since the presence of pyrrolizidine alkaloids, which are hepatotoxic or even carcinogenic, has been reported for Asian plants.