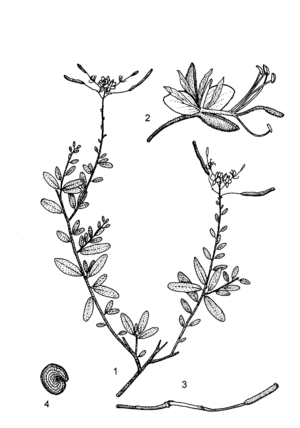 Cadaba farinosa is widely distributed in the low rainfall areas of tropical Africa from Senegal and Mauritania east to the Red Sea and extending southward to Tanzania, DR Congo and Angola.

Plant parts of Cadaba farinosa are widely used as an anti-inflammatory agent and for the treatment of colic, conjunctivitis, stomach ache and snake bite. Leaves are considered to be purgative, anti-syphilitic, anthelmintic and anti-phlogistic and employed in the preparation of medicated oils. Leaves are also used as a remedy for cough, rheumatism, fever, colds, dysentery and as poultice for carbuncles and sores. In Yemen the leaves are used in the treatment of urinary infection and hemorrhoids. Leaf extracts are taken in India as a cure for liver damage. The roots possess medicinal properties similar to those of the leaves. The roots are burned and the ash is used to neutralize venom from snakebites. Ash of the burned plant is rubbed into the skin to relieve general body pains. Flower buds are stimulant, antiscorbutic, purgative, emmenagogue, anti-phlogistic and anthelmintic (especially for roundworms). An infusion prepared of the roots, mixed with those of Moringa oleifera Lam., is used to treat trypanosomiasis in animals. The leaves and roots are used in traditional veterinary medicine to treat anthrax. In Burkina Faso it is used as a cure for hemorrhagic septicemia, a disease caused by the bacterium Pasteurella multocida, in domestic animals.

The leaves and young twigs can be eaten after pounding and boiling or are pounded with cereals and can be consumed or traded after drying into a pudding or cake. Pounded leaves are often cooked with couscous. It is also popular as famine food. Dried leaves are used for flavoring and macerated flowers are used as a sweetener. Fruits are edible. It is a good forage plant. In parts of Ethiopia, during the dry season it is often the only source of green roughage. In Kenya traditional stools are made with the wood because it can easily bend. In the Taita Hills of Kenya it is planted in compounds as an ornamental, as a live fence and as shade for chicken. The wood is used as firewood. The bark is used for tying and to make ropes. In Eritrea twigs of Cadaba farinosa are used as a toothbrush (‘miswak’). The bark is used as a condiment. In Nigeria soft-drinks called ‘kunu’ are produced locally from several cereals (millet (Pennisetum glaucum (L.) Br.), sorghum (Sorghum bicolor (L.) Moench), maize (Zea mays L.), rice (Oryza sativa L.) or fonio (Digitaria exilis (Kippist) Stapf), in which a crude extract of Cadaba farinosa can be added as a condiment. Preparations made from the plant are used in cleaning ceremonies in the Sudan.

The spermidine alkaloids cadabicine and cadabicine diacetate have been isolated from the stem bark. Flavonols, flavonol glycosides, gallic acid, ellagic acid, p-coumaric acid and ferulic acid and the alkaloids stachydrine and 3-hydroxystachydrine were isolated from the leaves. Cadabicilone, a sesquiterpene lactone of the eudesmanolide type, was isolated as well. Cadaba farinosa extracts can hydrolyze starch, which explains their use as a saccharification agent in the production of drinks; they reduce the viscosity and decreases the specific density.

Tests with an ethanol extract of the leaves did not show significant antioxidant, antibacterial, antifungal or cytotoxic activities, except against the fungus Trichophyton mentagrophytes. The hepatoprotective activity of ethyl acetate and aqueous extract of the roots against CCl4-induced hepatotoxicity in rats has been tested. Both extracts were active but the ethyl-acetate extract was more potent than the aqueous extract. Both extracts also showed antioxidant activity in vitro.

Cadaba farinosa is one the preferred forage species of camels in northern Kenya. The nutritional composition, on dry weight basis of the leaves browsed by camels, has been found to vary with the season. The reported ranges are: crude protein 15.2–18.2%, neutral detergent fibre 60.6–80.4% and ash 7.0–8.1%.

In Cadaba farinosa 2 subspecies are recognized. In subspecies adenotricha (Gilg. & Gilg-Ben.) R.A.Graham the twigs are covered with short spreading glandular hairs and its distribution is restricted to DR Congo, Rwanda, Sudan, Uganda, Kenya and Tanzania. In subspecies farinosa the twigs have no hairs but in return are covered with sessile scales. Cadaba is a genus of c. 30 species distributed throughout the Old World, of which c. 22 occur in tropical Africa. Several other Cadaba species are locally used as medicine in tropical Africa.

Cadaba aphylla (Thunb.) Wild is a twiggy shrub up to 2 m tall with striking red flowers and occurs in Namibia, Botswana and South Africa in a wide variety of habitats. The moist, powdered plant is applied as a poultice to ripen boils and abscesses. The root is used in small doses as a tonic and also as a purgative; an overdose might be toxic. Plants are occasionally grown in gardens, and shows particular potential as a plant for dry, arid gardens and will also survive in areas with frost.

Cadaba carneo-viridis Gilg & Gilg-Ben. is a small shrub of up to c. 1.3 m tall with a range restricted to Kenya and Tanzania at altitudes up to 600 m. A root decoction is drunk in Tanzania to treat stomach-ache.

Cadaba heterotricha Stocks ex Hook. is a tree up to 7 m tall and occurs in Ethiopia, Somalia, Kenya east through Arabia to Pakistan. In Somalia the crushed leaves in water are given to dromedaries to treat intestinal worms.

Cadaba kirkii Oliv.is a shrub up to c. 5 m tall from Tanzania south to Zimbabwe and Mozambique. In Tanzania the dried, pulverized roots are taken dissolved in water as a cure for bilharzia. The fruit is edible and the shrubs are readily browsed by livestock.

Cadaba natalensis Sond. is a shrub or small tree up to 4 m tall that is distributed from Mozambique southwards. The Zulu drink a root extract as a cure for inflammation of the lungs, and in Mozambique tuberculosis is treated with it.

Cadaba ruspolii Gilgis a shrub of 1–2 m tall distributed in Ethiopia, Kenya and Tanzania. The Rendille people of Kenya soak bark in water that is drunk to cure malaria and stomach ulcers. The wood is burned to fumigate containers and plants are heavily browsed by all livestock.

Cadaba virgata Bojer is a shrub or small tree up to 6 m tall and is an endemic of Madagascar. A leaf decoction is drunk as a cure for diarrhoea and used as a general stimulant. The use as a stimulant is also recorded for the bark decoction. The roots, stems and leaves are used to treat eye infections and as an anti-galactagogue.

Cadaba farinosa is often found at the base of other trees and is frequently associated with Balanites aegyptiaca (L.) Delile and Maerua spp. It often grows on termite mounds. Flowering occurs at the end of the dry season or start of the rainy season.

Cadaba farinosa prefers heavy soils but is also found on sandy soils, stony slopes and along periodically inundated depressions, from sea-level up to 1700 m altitude. It is found in areas with an annual rainfall of 200–500 mm.

Regeneration is by seeds. The 1000-seed weight is c. 125 g. Seeds loose viability fast so fresh seeds are to be used for sowing.

The species can be readily coppiced but since it is almost exclusively collected from the wild, management is not yet relevant.

The leaves of Cadaba farinosa are harvested extensively from the wild.

Leaves of Cadaba farinosa are either used shortly after harvest or are left to dry in the shade.

There is no risk of genetic erosion of Cadaba farinosa since it is widespread and common.

The wide range of medicinal uses of Cadaba farinosa warrants research into the medicinal and pharmacological properties, especially those of the leaves. Phytochemical analyses indicate the presence of several pharmacologically active compounds. A toxicity assessment needs to be done.