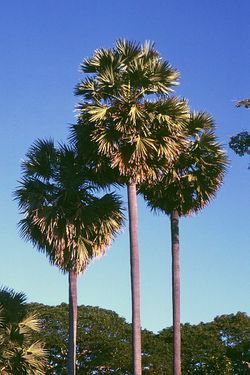 The Hindi tāṛ, tāḍ and Indonesian lontar, ental come from Sanskrit tāla. Wealth of India mentions a different Sanskrit name, thrinaraja. Palmyra has nothing to do with the name of the town Palmyra. It simply comes from Portuguese palmeira brava ("wild palm"), which also gave another Anglo-Indian name of the species, brab. The French rônier originally means Borassus aethiopum, and was borrowed from Wolof (a language of Senegal).

Forms from Eastern Indonesia are slightly different, and have sometimes be separated under the name Borassus sundaica Becc. (1908).

The species originates from India, where it probably appeared as a result of an old introduction of Borassus aethiopum, the African species. The use of leaf blade rectangles (ola) as a support for writing goes up to Pannini, the grammarian who allegedly coined the Sanskrit alphabet ca. 400 BC. The Pali Buddhist canon dating 5th century BC. was also written on olas. What is ignored is whether the palm was Borassus flabellifer or a Corypha. Anyway, its use is very old in Southern India and Ceylon.

The fame of the Palmyra palm had reached the ancient Greeks, and Megasthene (320 BC., quoted by Arrian) cites the tala, confusing it with the coconut.

Diffusion of the Palmyra palm from southern India followed that of buddhism in Burma, Thailand, Cambodia (Angkor) and Vietnam. This palm was planted near temples, and its leaves were used for writing sacred texts. To the south, Palmyra palm followed the routes of Indian trade, to Java and Eastern Indonesia. In contrast, it seems to be absent from the regions of Chinese culture.