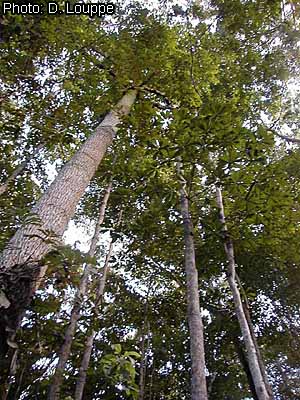 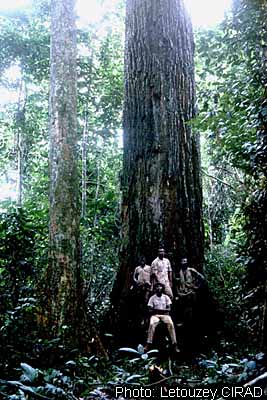 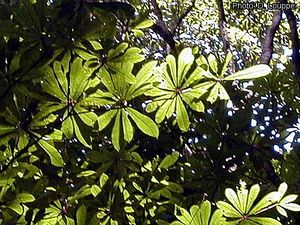 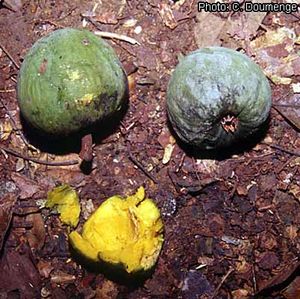 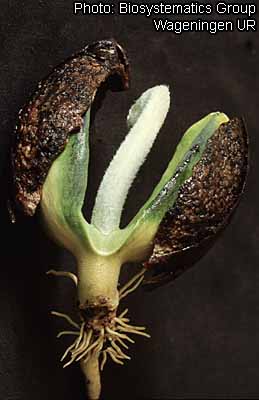 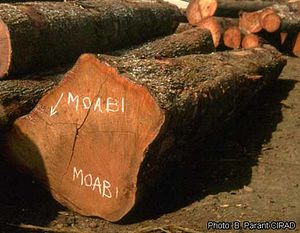 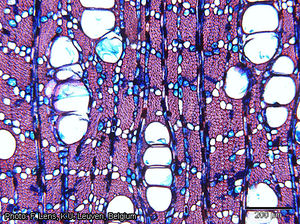 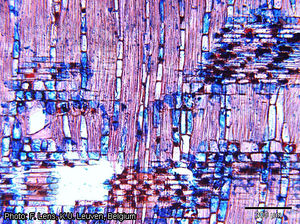 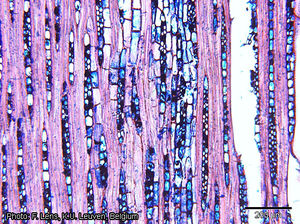 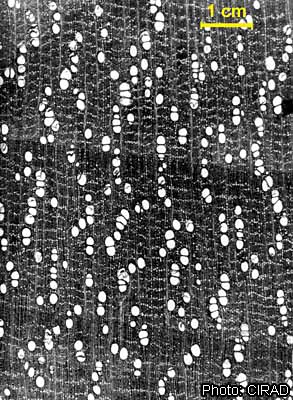 The fruit pulp is eaten fresh although it contains latex. The seed kernel contains a fatty oil that is used in cooking, for cosmetic purposes and in traditional medicine. The oil is applied as a pomade to the hair and used in soap manufacture, and it is applied externally to treat rheumatic pains. The residues of oil extraction are sometimes used as fish poison. Bark decoctions are used to treat kidney problems, toothache, rachitis, vaginal infections and affections of the respiratory and digestive tracts. The tree has several ritual uses.

Moabi bark is regularly sold in markets in Cameroon for medicinal purposes; in 2000 the amount traded was estimated at 3.2 t. The seed oil is sold on local markets, but no statistics are available.

The density is 820–940 kg/m³ at 12% moisture content. The timber dries slowly, but with care it seasons without checking and warping. The shrinkage rates are moderate, from green to oven dry 5.8–6.5% radial and 6.9–8.6% tangential. Slow drying to a moisture content of 10–12% is needed for use in joinery or carpentry. Once dry, the wood is stable.

The wood is difficult to work due to the presence of silica (0.2–0.3%) and because it is hard. Stellite-tipped sawteeth are needed. The wood glues, nails and finishes well, and has good steam-bending properties. Painting and varnishing with the principal industrial products do not cause problems. After steaming for 48–60 hours, rotary peeling and slicing give veneer and plywood of satisfactory quality.

Moabi wood is durable. It is resistant to fungi, Lyctus beetles and termites. It is fairly resistant to marine borers. Impregnation by preservatives is difficult or impossible.

The allelopathic compound 3-hydroxyuridine has been isolated from leaves, stems and roots of moabi; it inhibited the growth of seedlings of some test plants.

Moabi wood can be confused with that of other Sapotaceae species having heavy and reddish brown wood, particularly mukulungu (Autranella congolensis (De Wild.) A.Chev.), makore (Tieghemella heckelii (A.Chev.) Roberty) and douka (Tieghemella africana Pierre). The fatty seed oil is similar to that of Tieghemella and shea butter tree (Vitellaria paradoxa C.F.Gaertn.) and used for similar purposes.

Baillonella comprises a single species and resembles Tieghemella and Mimusops, the first differing in the absence of stipules and its thicker seed coat, the latter in its seed with small and basal scar.

Germination takes 1–4 weeks. Shade is required for germination, and seeds germinate in abundance under or close to mother trees. However, young plants of 1 m tall are rare as a result of predation by animals, mainly elephants, and the survival rate of moabi seedlings after 18 months is practically nil under the mother tree and very low (less than 2%) elsewhere. In forest undergrowth seedlings grow 4–5 cm/year. They respond rapidly to opening of the forest cover and direct sunlight, and under these circumstances may grow up to 40 cm/year. In natural forest, moabi trees of 10 cm in stem diameter have an average annual diameter growth of 1 mm. When the tree bole has attained 1 m in diameter and the crowns have reached or passed the forest canopy, diameter growth is up to 9.5 mm/year. It has been estimated from growth rings and C14 dating that a tree with a bole diameter of 1 m was 260 years old and one with a diameter of 2.8 m 600–700 years. In an 11-year-old plantation in Ekouk (Gabon) trees grown in full sun showed a mean annual height growth of 130 cm and under partial shade 165 cm. A dense (570 stems/ha) plantation of 67 years old near Libreville had a mean annual diameter increment of 3.5 mm, with the most vigorous tree reaching 9 mm; the annual volume increment was estimated at 4.2 m³/ha, with an average clear bole of 15 m and 23% of the trees having a straight and cylindrical bole.

The tree starts flowering at an age of 50–70 years, when it has reached the light in the upper storey of the forest, but regular fructification starts still later, when the bole has reached 70 cm in diameter. Fruits are produced annually, but mass production occurs once in 3 years. About 6000 seeds per tree are produced within a cycle of 3 years; a single tree produced 2460 kg of fruits, including 327 kg of seed kernels.

In Cameroon flowering starts at the end of the long dry season and beginning of the short rainy season, in February to April. It is accompanied by complete defoliation of the tree; when the tree does not flower, it maintains part of its foliage. Fruits ripen just before the start of the long rainy season, from June to August. The fruiting season lasts up to 4 weeks for an individual tree, but may last 3 months for the whole population. In Gabon moabi fruits become ripe from December to February. Elephants are the main seed dispersers. They eat the fruits, and intact seeds can be found in the droppings. It is not necessary for the seeds to pass through the intestines for germination, but it does accelerate germination slightly. Other fruit-eating mammals such as giant pouched rats (Cricetomys emini) and monkeys may also disperse seeds, as well as man.

Moabi occurs in primary rain forest in humid and warm climates, with a mean annual temperature of 23–26°C and mean annual rainfall of 1500–3000 mm. It usually occurs scattered, with about 1 adult tree per 20 ha, but occasionally loose groups of 5–50 trees are found. Some forests are rich in moabi trees, e.g. Dja forest in Cameroon, with on average 0.6 tree over 70 cm in bole diameter per ha. In Dja forest there is a maximum number of trees in the diameter class 10–40 cm and a secondary maximum at 160–190 cm. At the northern limits of the primary Congolean rain forest in Cameroon large moabi trees are abundant, but regeneration is absent. Moabi can be found on all soil types except on marshy soil.

The germination capacity of fresh seeds is high (> 85%), but drops rapidly to 5% after 6 weeks of storage due to rapid degradation of the fatty acids. However, fresh seeds stored at 4°C and humid conditions still showed a germination rate of about 50% after 11 months.

In the nursery the lower half of the seed is buried, with the scar pointing downwards. The mortality of seedlings in the nursery is very low. Partial shading is favourable for seedling development. Under optimal nursery conditions seedlings may reach 35 cm in height after 6 weeks, 45 cm after 3 months and 1.5 m after 18 months. The seedling develops a taproot and it is recommended to sow into polythene pots. At the beginning of the short rainy season in Cameroon 4–5-month-old seedlings are planted into the field under the light shade of about 10 retained adult trees per ha. The shade should be removed gradually when a reduction in diameter growth is observed.

At present, the only management measure for natural forest is the maintenance of a minimum diameter limit for exploitation, i.e. 70 cm in Gabon, 80 cm in Congo and 100 cm in Cameroon. The Pygmy people highly value large moabi trees for their fruits and conflicts arose in Cameroon between the Pygmies and companies entitled by the government to exploit the forest for timber. This has resulted in a law endowing the village chief with the power to authorize the cutting of a moabi tree within 5 km distance from a village.

The sapwood is susceptible to attack by insects and fungi. In felled logs some of the insects affecting the sapwood (e.g. Platypes and Scolytes spp.) may reach the heartwood.

Fruits still attached to the tree are attacked by larvae of the beetle Carpophilus sp. and the moth Mussidia sp. When they reach the embryo, the seed will not germinate; otherwise the development of the seedling may be strongly retarded. Bush pigs and porcupines eat the seeds, and bush pigs and antelopes destroy seedlings while eating the fleshy cotyledons and young shoots.

In Cameroon commercial exploitation of moabi implies the cutting of 90% of trees above 100 cm in diameter, leaving only poorly shaped trees. It has been estimated that after 300 years 84% of the harvested volume is re-established and after 500 years 92%. Sustainable production of moabi in natural forest is therefore not possible. Cutting cycles of 30 years, as often practised, threaten moabi populations seriously.

In Cameroon fruit collection starts in July or August. Pygmy families move to localities where clusters of trees are found and stay there for 2–8 weeks. Locally in Gabon people move into temporary camps in January to February, when the moabi trees are fruiting. The collected fruits are depulped and the seed kernels dried. After heating the oil is gathered by pressing with a traditional wooden press. The oil is used domestically or sold. It can be stored for 1–2 years.

In 1992, which was a very good year for fruit production, the yield of oil was estimated at 135–165 l per adult tree, which was equivalent to US$ 165–200. The price on markets in Yaoundé and Douala (Cameroon) is more than US$ 3 per l because demand exceeds supply.

The sawdust may cause irritation to throat, nose and eyes, and also dermatitis.

According to the IUCN classification, moabi is vulnerable because of overexploitation and habitat degradation. The low growth rate and often poor natural regeneration make it even more liable to genetic erosion or even extinction in forest liable to timber exploitation.

Proper propagation and planting techniques have been developed for moabi and consequently it is possible to include the species in plantation forestry. Although the growth of planted trees can be faster than in natural forest, timber exploitation can not be expected within a century. Moabi trees are important for local populations because of their valuable fruit, and those close to villages should be protected, taking into account that they start fruiting many decades after germination. Moabi deserves protection also because it is the largest and perhaps most impressive tree of the African forest,