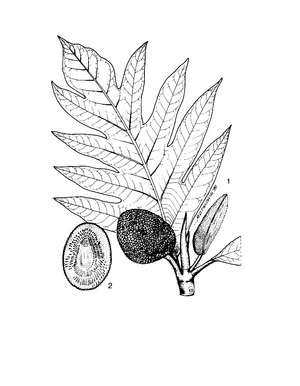 The exact origin of breadfruit is uncertain. The centre of genetic diversity extends from Indonesia to Papua New Guinea. In a broad sense, it is a native of the Pacific and tropical Asia. It has long been an important staple food in Polynesia. Breadfruit is now widely distributed throughout the humid tropics.

Immature as well as ripe fruits and seeds are eaten after boiling, baking, roasting or frying. The fruit may be cooked whole or after cutting it; thin slices are also fried. A kind of biscuit is made by slicing the ripe cooked fruit and drying in the sun or in an oven; thus prepared it can be kept until the next fruiting season. On many Pacific islands breadfruit is preserved in pits or by burying (Samoa). The stored fruit ferments and is converted into a nutritious but disagreeably smelling cheese-like paste, which is made into cakes and baked. Commercial processing is limited to preserving the boiled cut fruit in brine. In the Philippines, the mature seedless fruit is boiled and eaten with sugar and grated coconut or coated with sugar and dehydrated; immature seeded fruit is cooked as a vegetable with coconut milk.

Leaves and fallen fruits make good animal feed. The male flower spikes are blended with fibre of paper mulberry ( Broussonetia papyrifera (L.) Ventenat) to make elegant loincloths. The smooth, grey bark is fibrous and was once a source of the native cloth "tapa". The milky sap is used to caulk canoes, as a glue to catch birds and as a chewing gum. Diluted with rain water, the latex from the trunk is used as a remedy for diarrhoea. In Trinidad and the Bahamas a leaf decoction is believed to lower blood pressure and to relieve asthma. Chewed young leaves are said to counteract food poisoning. The light yet quite firm, nicely grained wood is used to make canoes, surfboards, toys, boxes and crates; it can also be used in light construction work.

Breadfruit trees are planted as windbreaks and sometimes as shade trees for coffee.

No statistics are available on area and production. Though a staple food in many tropical islands there is virtually no international trade. Small consignments are exported to the United Kingdom, France and Italy. Canned breadfruit in brine is available in many oriental stores. Jamaican traders export partially roasted whole fruit to Europe and the United States.

Most cultivated breadfruits are seedless, seeded ones are known as breadnuts. Breadnuts bear fleshy prickles, the edible pulp is largely replaced by the seeds, which are brownish, rounded or flattened, 2.5 cm long. All parts of the tree are rich in white gummy latex.

Seeds germinate about 2 weeks after sowing. The seedlings tend to grow slowly, but they respond well to better growing conditions and may start flowering in 4-10 years. Asexually propagated seedless forms start flowering after 3-4 years. Under stress the trees shed most of their leaves, tufts of young leaves persisting at the tip of the twigs. The flowering pattern appears to depend on the cultivar rather than the climate, at least in the humid tropics. Most cultivars flower throughout the year, but some flower and fruit seasonally. Further from the equator, however, the seasons determine shoot growth and all cultivars flower and fruit more or less simultaneously.

The seeded breadfruit is considered to be the wild form, although both seeded and seedless forms are cultivated. So-called seedless forms occasionally produce fruit with some seeds.

Forms with entire leaves and with both seeds and edible pulp are sometimes classified as a separate species: Artocarpus mariannensis Trécul. Based on leaf, fruit and seed characteristics, hundreds of breadfruit cultivars have been described and named, particularly in the Pacific islands. Usually the cultivars are poorly defined and only grown in one or two localities, so that it is not easy to compare cultivars.

Breadfruit is a species of the wet tropics, preferring a hot (temperature 20-40°C) and humid (rainfall 2000-3000 mm, relative humidity 70-90%) climate. The latitudinal limits are approximately 17°N and S; the maritime climate of small islands allows growth to 20-23°N. Rain apparently stimulates extension growth, flowering and the rate of growth of the fruit. The tree is occasionally found in the highlands (even up to 1500 m) and at higher latitudes, but yield and fruit quality suffer in cooler conditions and the tree is more at home in the equatorial lowlands (below 600 m). Young trees grow better under shade but later full sun is required.

Tree growth is best in deep, well-drained, moist alluvial soils rich in humus. The trees also grow on shallow coralline soils of the atolls, and in New Guinea they are found at the forest edge in floodplains and swamps. Whereas the trees shed their leaves under dry conditions, it is said that they shed their fruit when the soil is excessively wet; so yield may be depressed on marginal soils. Apparently cultivars differ greatly in their tolerance of adverse conditions; there are cultivars that cope well with shallow calcareous soils, brackish water and salt sprays, annual rainfall of only 1500 or 1000 mm, etc.

The seeded breadfruit is usually propagated by seed. Fresh seeds germinate readily giving 90-95% germination. The seeds lose viability within a few weeks and cannot be stored in a refrigerator. The seedless breadfruit is traditionally propagated from root suckers, which can be separated when adventitious roots have been formed. This method, however, is laborious and plant losses in the field are high if the plants are not nursed carefully. Root suckers can also be air layered, which increases the multiplication rate as well as the survival rate. The more common propagation method is by root cuttings. Sections of roots 2.5 cm or more in diameter and 20-25 cm long are inserted - at an angle, not upright - in a shaded nursery bed, maintaining a high humidity until the cuttings form adventitious shoots and roots, which may take many months. They are then potted in individual containers and cared for under shade prior to planting in the field. Other propagation methods, e.g. air layering, budding and grafting (using seedlings of the seeded form as well as other Artocarpus species as rootstocks) have given varying degrees of success.

Plants are set out in the field at the onset of the rains at a distance of 6-12 m, depending on the cultivar and growing conditions. Where vigorous growth is expected a spacing of 12 m × 8 m (about 100 trees/ha) is recommended. Partial shade is provided until the plants are well established.

As the plants resume growth in the field, the shade is removed. For a year or two supplementary irrigation is desirable to sustain growth. Weeding around the trees may be replaced by generous mulching to conserve moisture and initiate a slow but steady supply of nutrients. Nutrient requirements have not been studied and mature trees are not normally manured. However, the growth of young trees may be stepped up by applying manure or fertilizers 2 or 3 times per year. The fertilizer may be mixed with the mulch and covered with fresh mulching material.

For tall, sparsely branched cultivars, formative pruning and bending of branches of young trees may be beneficial in improving tree shape for harvesting.

In the Pacific outbreaks of Pingelap disease have caused dieback and death of trees on a large scale since the 1950s; it was estimated that only 20% of the trees survived an outbreak in Guam in 1964. The causal organism is not known and there is no cure. Typically the top branches die back first; after a while the lower branches also wilt and the tree eventually dies. Other diseases of the breadfruit are dieback (Fusarium, Pythium and Rosellinia), pink disease (Corticium and Pseudocercospora) soft rot of fruit (Phytophthora palmivora), fruit rot (Phytophthora, Phyllosticta, Rhizopus), stem-end rot (Phomopsis , Dothiorella and Phylospora), leaf blotch (Phyllosticta artocarpicola), leaf spot (Pseudocercospora and Cercospora), leaf rust (Uredo artocarpi) and root rot (Phillinus noxius). The common insect pests of breadfruit are mealybugs, scales, twig borers and fruit flies. Little or no crop protection is practised.

Mature fruits are harvested when they turn yellowish; at that stage drops of latex are secreted on the surface. Fruit harvested green should be handled with extra care since the slightest injury causes a flow of latex. The fruit stalk is cut with a sharp knife by a person climbing the tree, or twisted using a wedge attached to a long pole. The fruit drops to the ground or is caught in a net as it falls. The fruit is directly submerged in water or the stalk end is covered immediately to stop the bleeding.

Harvested fruits are collected in baskets and kept in a cool, shaded place. Fresh green fruit has a shelf life of 7-10 days which can be extended by keeping the fruit in water; ripe fruit lasts for 3-7 days. Fruits wrapped in polyethylene bags and kept at 12°C can be stored for about 20 days. Lower temperatures cause chilling injury. Fruit may be preserved by cooking, fermentation in pits or pots, and dehydration in the sun or in an oven; the products can be kept until the next harvest season.

The genetic resources of breadfruit appear to be very rich. Cultivars not only differ greatly in tree and fruit characters, but also in their adaptation to specific environmental conditions. Certain cultivars are preferred for specific purposes, e.g. for harvesting green, for various forms of processing, for cattle feed, for timber.

Several attempts have been made to collect cultivars from various regions and to test them in comparative trials in a few locations (e.g Western Samoa, Tahiti and Fiji). However, it is not clear what the outcome of these trials was.

For a crop that is an important staple in vast archipelagos and has caught the fancy of the western world in a compelling way, remarkably little is known about yield levels, harvest seasons and other factors which determine whether breadfruit can hold its own against competing staple foods and fruits. For South-East Asia a much better insight into the phenology and yield of trees in humid and monsoon climates is a prerequisite to substantiate the often-heard claims that the prospects for breadfruit are very bright indeed.