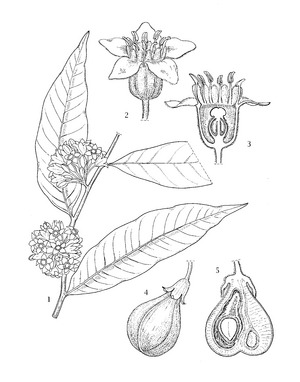 Agar wood is the rare and famous, resin-containing heartwood produced from old and diseased trees of several Aquilaria species of which A. malaccensis , A. crassna Pierre ex H. Lecomte from Indo-China and Thailand and A. sinensis (Lour.) Sprengel (synonym A. grandiflora Benth.) from southern China are most important. In trade a distinction between the wood from these species is rarely made. The fragrance produced by the burning agar wood has been highly valued for thousands of years, and its use as incense for ceremonial purposes in Buddhism, Confucianism and Hinduism is widespread throughout eastern and southern Asia. In Thailand it is put into funeral pyres, while in Japan, the incense is used in tea ceremonies. In the early 19th Century agar wood was part of the tribute paid by Vietnam to the imperial court in Beijing. Wood only partly saturated with resin but still fragrant, and occasionally also the wood remaining after distillation, is made into sticks called "joss-sticks" or "agarbattis" which are burnt as incense. Agar-wood oil is an essential oil obtained by water and steam distillation of agar wood. Agar-wood oil is used in luxury perfumery for application in e.g. oriental and woody-aldehydic bases, "chypres" and "fougères". It produces interesting odour notes with clove oil, e.g. in carnation bases. The oil is so rare and expensive that it is only produced on request. Attars of agar wood are used more widely in the Middle East and India.

The silvery inner bark can be removed from the trunk in a single large sheet. It is highly valued for its strength and durability and is made into cloth and ropes. In Assam and Sumatra it is made into writing material, formerly only used for chronicles of important events and religious books.

In western, Chinese and Indian medicines the incense is used against cancer, especially of the thyroid gland. In China it is applied as a sedative against abdominal complaints, asthma, colics and diarrhoea, and as an aphrodisiac and carminative. The incense is also used as an insect repellent. Grated wood enters into various preparations used especially during and after childbirth, and to treat rheumatism, smallpox and abdominal pains. Decoctions of the wood are said to have anti-microbial properties, e.g. against Mycobacterium tuberculosis and Shigella flexneri .

The timber of undiseased trees, known as "karas", is very light and is suitable for making boxes, light indoor construction and veneer.

The retail price of agar wood varies between countries and depends on quality. The 1993 statistics from Saudi Arabia show that in Dubai the prices per kg varied from US$ 27 of low grade agar wood to close to US$ 10 000 for the highest grade. In the United Kingdom, commercial agar-wood oil retails UK£ 160 for 2.5 ml, while in Thailand, low grade agar wood could fetch a price per kg of US$ 1.20 and the finest grade US$ 2800. In Malaysia, the 1996 prices per kg range from US$ 5 for mixed grades to US$ 1000 for the top grade.

Agar-wood oil is a yellow to dark amber, viscous liquid with a characteristic balsamic and woody odour. It has olfactively some resemblance with vetiverol or styrax and has a sweetness similar to that of sandalwood oil. Its odour is long-lasting and exhibits a good tenacity in applications. Few analyses of the volatile components of agar wood have been made. Analyses made in Switzerland reported agarofuranoids and sesquiterpenoids of the eudesmane, eremophilane, valencane and vetispirane type as the main components. An analysis from Japan of the essential oil obtained from agar wood identified as originating from A. malaccensis used diethyl ether extraction of the highest quality agar wood. This analysis indicated that oxygenated sesquiterpenes and chromone derivatives are the main components of the esential oil. The main components identified in the smoke obtained by heating the wood to about 200°C belonged to the same group of components. Analysis of a commercial sample from India, however, gave a rather different composition. See also: Composition of essential-oil samples.

A. malaccensis yields a soft, lightweight hardwood with a density of about 400 kg/m3air dry. The wood is creamy white to pale yellowish-brown or greyish-brown, heartwood and sapwood not clearly differentiated; the texture is rather coarse and the wood diffuse-porous. Growth rings are distinct or indistinct; vessels very small to medium-sized, solitary or in radial multiples of 2-5 or in clusters; parenchyma scanty paratracheal; rays very fine. Included phloem is always present in isolated, evenly distributed strands. The scented wood differs from the normal wood due mainly to deposition of an aromatic resin. The resin is concentrated in the included phloem strands. Because of the resin content the scented wood is relatively hard, brittle and heavy. Moreover, all samples of scented wood contain fungi with abundant septae in their hyphae. Most of the phloem strands in the scented wood are similar to those in normal wood, but a few are altered and have the appearance of an inter-xylarly vascular bundle with abaxial phloem, adaxial xylem and cambium in between the two ("abnormal tertiary tissue"). Formation of these tertiary tissues is associated with injury.

In a plantation in Malaysia, 67-year-old trees of A. malaccensis had reached an average height of 27 m and a diameter of 38 cm. Mature trees of about 80 years old in Assam (north-eastern India) may reach a height of 25-30 m and a diameter at breast height of 55-70 cm. In Arunachal Pradesh (north-western India) trees reached a height of nearly 5 m and a diameter of 30 cm 8 years after planting. Flowering and fruiting may start at an age of 7-9 years in north-western India where trees flower in March and bear fruit in June-July. Good seed years occur infrequently and a medium sized tree may then produce 1.5 kg seed.

Agar wood formation is a pathological process taking place in the stem or main branches where an injury has occurred. Fungi are involved in the process, but the process itself is not yet fully understood. Damage by boring insects is often associated with the infection. It is believed that the tree is first attacked by a pathogenic fungus, which causes it to weaken. Infection by a second fungus causes the formation of agar wood, but it is unclear whether it is a product of the fungus or the tree. The fungus implicated in the formation of agar wood in A. malaccensis is Cytosphaera mangiferae, while Melanotus flavolives is assumed to play a similar role in A. sinensis. A. malaccensis forms an association with endotrophic mycorrhizal fungi.

The 3 Aquilaria species considered as major sources of agar wood, A. crassna (from Indo-China), A. malaccensis (India, Malesia) and A. sinensis (China), are closely related. They can be distinguished by the length of their calyx lobes: 12-15 mm in A. crassna, 2-3 mm in A. malaccensis and 8 mm in A. sinensis. Other sources of agar wood in South-East Asia include some minor Aquilaria spp., Enkleia malaccensis Griffith, and the timbers Gonystylus bancanus (Miq.) Kurz and G. macrophyllus (Miq.) Airy Shaw.

A. agallocha is sometimes considered a species distinct from A. malaccensis; the former is then native to north-eastern India, the latter to Malesia.

A. malaccensis is commonly found in primary and secondary forest, mainly in plains but also on hillsides and ridges up to 750 m altitude. It always occurs scattered, in Peninsular Malaysia and north-eastern India at a density of about 2.5 trees/ha. In north-eastern India it occurs up to 1000 m altitude, but grows best in undulating terrain from 200-700 m, with an annual rainfall of 1500-6500 mm, a mean annual maximum temperature of 22-28°C and a mean annual minimum temperature of 14-21°C. In north-eastern India it is found in wet-evergreen and evergreen forest and more rarely in semi-evergreen forest. A. malaccensis prefers heavy soils developed from gneiss and other metamorphic rocks, but it also grows well on sandy loams developed from sandstone.

To date, A. malaccensis is only propagated by seed. Fruit harvested for seed should be collected when mature but still green. The best time for harvesting in north-eastern India is the second week of June. A medium-sized tree produces about 2000 seeds per year, but seed production may fluctuate greatly between years. Fruits are dried in the shade for about 2 days. They then burst and release the seed. Seed should be sown immediately, as it remains viable for only about 1 month. In north-eastern India it is sown in nursery beds, about 5 mm deep in a mixture of soil, sand and manure and kept under light shade. Germination starts after 10-12 days and is normally complete after 1 month. Seed sown immediately after collection has about 65% germination, falling to 45% after 1 week and 5% after 3 weeks in storage. Application of insecticides is often required, as the seedlings are more heavily attacked. Seedlings are pricked out into polythene bags 40-45 days after germination when they are 3-5 cm tall, and are kept under shade. They are ready for transplanting when 30-35 cm tall and 10-12 months old. Transplanting bare-rooted seedlings has been tried successfully in Malaysia. In north-eastern India seedlings are planted out in May-June at a spacing of 2.5 m × 2.5 m, in Malaysia a spacing of 2 m × 6 m has been used in trial plantings. Plantations of A. malaccensis have been established mainly for experimental purposes to test methods for the induction of agar wood formation.

After planting, A. malaccensis requires regular weeding, up to 4 weedings during the first year, gradually decreasing to 1 weeding in the 5th year. Thinning to the final stand is done in the 5th year. Through competition and mortality the density in a uniform stand in Malaysia decreased to 31 trees/ha in 67 years. In natural forests regeneration of A. malaccensis seems adequate to maintain the density of trees, if only old diseased trees are harvested. In that case harvesting is only economic if it is combined with the extraction of other non-wood forest products.

Little information is available on diseases and pests of A. malaccensis.

Although trees containing large amounts of agar wood often appear weakened and stag-headed, only experienced collectors can select trees exhibiting partial agar wood formation from natural stands of A. malaccensis. Because of their very high value, trees are often cut indiscriminately, and harvesting groups scour the forests of South-East Asia for Aquilaria trees using any means of transport available. The trunk of felled trees is cut into pieces and collectors then cut through the entire tree to locate the agar wood. Most attention is given to damaged parts and knots. The soft white wood of the tree was formerly often left to rot, which takes about 6 months. The agar wood that is not affected by this rotting process is collected later. This led to the belief that agar wood is formed in the ground after felling the tree.

For processing, pieces of agar wood are chopped into small chips and soaked in water. After proper maceration these are fed into a still for water and steam distillation. Solvent extraction is also used. The remains after distillation and wood only partially converted to agar wood are ground to sawdust. This is mixed with an adhesive substance to form a paste with which long thin sticks are covered to form incense sticks.

No germplasm collections or breeding programmes of A. malaccensis are known to exist. It is listed as an endangered species by CITES.

The extremely high prices paid for high quality agar wood and for the essential oil and the indiscriminate felling of diseased and healthy trees threaten natural stands of Aquilaria including A. malaccensis to extinction. Research into possibilities of artificial induction and stimulation of agar wood formation is therefore urgently required and may offer high economic returns, especially as trials indicate that management of plantations presents no great difficulties. Unless such methods are developed, A. malaccensis may soon be extinct.

Composition of essential-oil of Agar-wood oil