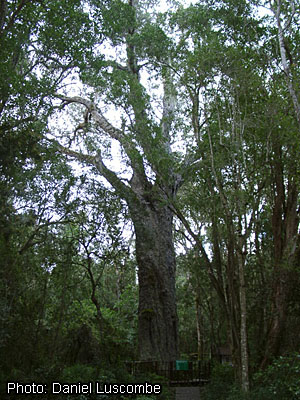 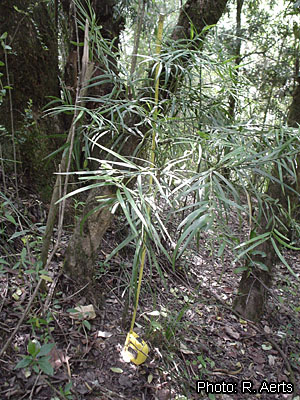 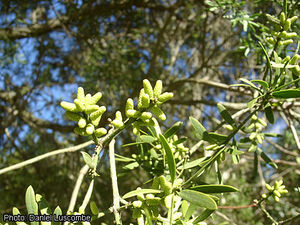 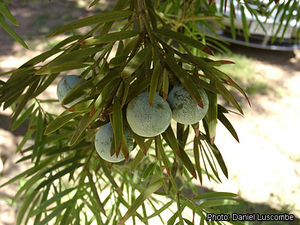 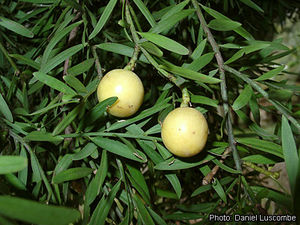 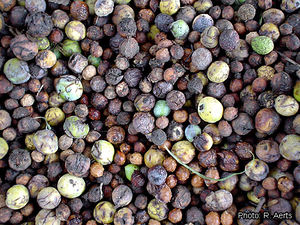 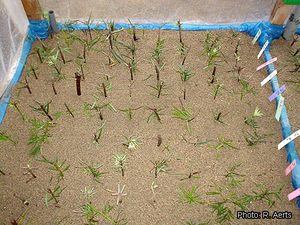 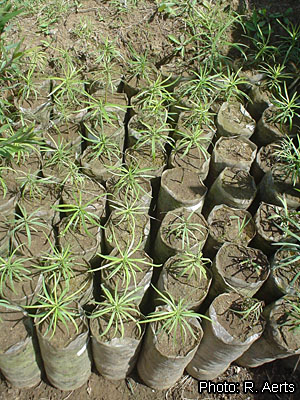 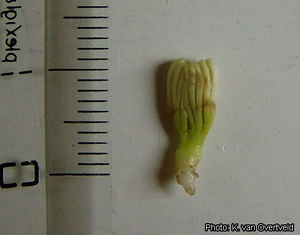 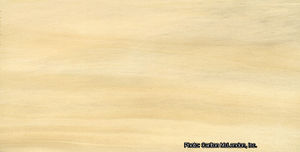 Afrocarpus falcatus occurs in mountain forest from Ethiopia through Kenya, Tanzania and Mozambique to eastern and southern South Africa; also in Swaziland and Lesotho. It is planted as ornamental tree in South Africa, and occasionally outside its natural area of distribution, e.g. in Australia, the United States and India.

The wood, often traded as ‘podo’ or ‘yellowwood’, is highly valued for ship building, e.g. for masts and planks, but it is also used for poles, panelling, furniture, boxes, veneer and plywood. It is suitable for construction, flooring, joinery, interior trim, mine props, vehicle bodies, railway sleepers, toys, novelties, agricultural implements, musical instruments, food containers, vats, turnery, hardboard and particle board. It is also used as firewood.

The ripe seed is edible, but resinous. Edible oil has been extracted from the seeds in Ethiopia. The bark and seeds are used in traditional medicine. Bark decoctions or infusions are used as anodyne, also to treat stomach-ache. A bark decoction is also applied to itching rash. Pulverized seeds are applied to treat tuberculoid meningitis and sunburn. In Ethiopia the seed oil is used in the treatment of gonorrhoea. The bark has been used for tanning, although it only contains 3–6% tannin. Afrocarpus falcatus is planted as ornamental and roadside tree; sometimes it is also used as container plant and Christmas tree. It is very useful for soil protection against water erosion. It is also planted as windbreak.

The heartwood is pale yellow to pale yellowish brown, and not distinctly demarcated from the sapwood. The grain is straight, occasionally spirally, texture fine and even. Reddish streaks of compression wood and darker lines resulting from year rings may be present. Resin is absent, and the wood has no distinctive odour.

The wood is moderately lightweight, with a density of 430–560(–620) kg/m³ at 12% moisture content. It usually air dries without problems, but surface checking, splitting and distortion may occur; close stacking and heavy weighting are recommended. Kiln drying should be done at lower temperatures. The rates of shrinkage from green to oven dry are about 3.6% radial and 5.4% tangential. Once dry, the wood is stable in service.

The wood is easy to saw and work, both by machine and hand tools, with little dulling effects on cutting edges. It can be planed to a smooth finish. The wood has a tendency to split upon nailing, and pre-boring is recommended. The gluing, painting, varnishing and staining properties are moderately good. Steam bending gives moderate to satisfactory results. Turning gives good results. The peeling properties are good; good-quality veneer can be produced from the wood. The wood is not durable, being susceptible to blue stain, powder-post beetle, pinhole borer, longhorn beetle, termite and marine borer attacks. It is permeable to preservatives. The wood is resistant to acids.

The wood of Podocarpus latifolius (Thunb.) Mirb. closely resembles that of Afrocarpus falcatus and is used for similar purposes; it is also known as yellowwood.

Afrocarpus comprises 1–4 species, depending on the species concept, and is restricted to mainland tropical Africa. It has been separated from Podocarpus in 1988, mainly based on the absence of a fleshy receptacle at the base of the seed and on chromosome number, but there is still disagreement about this. However, molecular data support the recognition of Afrocarpus as distinct from Podocarpus.

On the basis of more slender leaves Afrocarpus gracilior (Pilg.) C.N.Page from East Africa is sometimes kept separate from Afrocarpus falcatus sensu stricto, which is then restricted to southern Africa.

In South Africa trees reached a height of up to 8.2 m and bole diameter of up to 14 cm 11 years after planting. On fertile soils in Rwanda the annual growth can be over 1 m in height and 1 cm in bole diameter, at least until 15 to 20 years old. The tree is very sensitive to competition, and thinning is necessary for good diameter growth.

The pollen is dispersed by wind, but most of it does not get far from the male tree. Fruiting starts when the tree is 10 years old. Seed production varies from year to year. Usually, trees bear seeds irregularly, mostly at intervals of 2–4 years. Seeds take about one year to develop. They remain on the tree for a considerable time. Fruit bats are the main dispersers; they feed on the fleshy part of the seed coat, discarding the woody part with the embryo. Colobus monkeys feed on the seeds, but also rodents, bushpig and large birds such as hornbills and turacos. However, it has been reported that seed that has passed the digestive tract of these animals usually does not germinate anymore. Seedlings seem to establish only after mast seed years, and usually close to the parent tree. Investigation of the roots revealed the presence of arbuscular mycorrhizae. Trees may reach a very high age, up to 600 years.

In East Africa Afrocarpus falcatus occurs in forest in the mountains at 1500–2400(–3000) m altitude, often associated with Juniperus procera Hochst. ex Endl. It is characteristic for undifferentiated Afromontane forest, but it can also be found in rainforest. Locally it occurs in nearly pure stands. In southern Africa Afrocarpus falcatus is uncommon, usually occurring as scattered trees or in small clumps. It can be found there in moist coastal forest, as well as in patches of mountain forest and wooded ravines. It prefers places with an annual rainfall of (800–)1200–1800(–2200) mm and mean annual temperatures of 13–20°C. It is susceptible to drought; it tolerates light frost, but young seedlings are susceptible. Afrocarpus falcatus is characterized as a non-pioneer, shade-tolerant species. It performs best on well-drained, deep, humus-rich and light-textured soils with pH of 5–7.

Seeds can be sown into nursery bags or seed trays, using a 1:1 mixture of well-rotted compost and washed sand. They should be covered with a thin layer of soil. At the time of transplanting, care should be taken not to damage the taproot.

Methods of vegetative propagation have been investigated. Leafy branch cuttings 6–11 cm long and 2–3 mm in diameter derived from stock plants of 3 months to 2 years old showed up to 80% rooting when indolebutyric acid was applied at doses of 20–80 μg per cutting. Semi-hardwood cuttings 10–12 cm long taken from 4– 5-year-old saplings treated with 2000 ppm indolebutyric acid showed a rooting rate of 45%.

Studies in mountain forest in Ethiopia showed that natural regeneration of Afrocarpus falcatus was poor.

Enhanced nutrient supply increases the growth rate of seedlings, especially at high irradiance levels, but not on burned sites. Protection of plantations against fire is necessary. In South Africa trees planted in agroforestry systems showed better growth (average height 4.2 m and 90% survival after 7 years) than in plantations (average height 3.4 m and 58% survival).

Afrocarpus falcatus is self-pruning, but in plantations with wide spacing pruning operations are needed for proper bole development. In Rwanda thinning to 50% was carried out when the trees were 15 years old, and the response was very good: at age 26 the mean annual growth in diameter was 7 mm/year in the thinned plot and only 2.5 mm in the unthinned plot.

Fusarium oxysporum and Polyporus sp. are pathogenic to seeds and seedlings. An unidentified fungus causing blackish tumours on twigs and leaves causes vitality problems in relict populations of Afrocarpus falcatus in northern Ethiopia. Seeds are commonly attacked by insects, which may cause considerable losses.

In plantations on good sites, trees can be harvested for timber 40–50 years after planting.

Trials in South Africa showed that the growth rate and yield of Afrocarpus falcatus plantations (standing volume 47.7 m³/ha 11 years after planting) and also wood quality compared favourably to those of commercial pine plantations. Mean annual volume increment over 20 years was calculated as 5.8 m³/ha.

Logs are susceptible to insect and fungal attacks and should be removed from the forest and converted as soon as possible after felling, or treated with preservatives.

In experiments in South Africa it was demonstrated that seeds from provenances near the afforestation site showed better results after germination than those from provenances from further away.

Afrocarpus falcatus could make an excellent indigenous substitute for exotic pine tree plantations throughout its native range. Plantations have the capacity to produce valuable timber with good export prospects in rotation cycles of reasonable time, and they have important ecological value as well. Studies to determine the genetic variation, selection of provenances with superior wood characteristics and investigations on optimal silvicultural systems are needed. Immediate action is needed for in-situ conservation of the remaining natural stands.