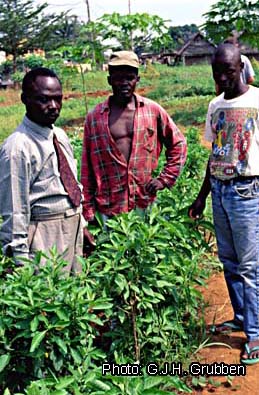 plants in the field 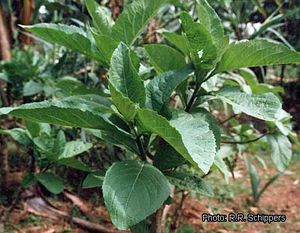 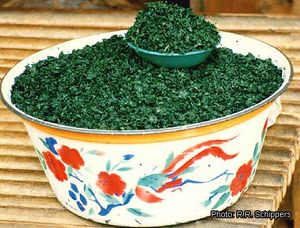 ready-made leaves on the market 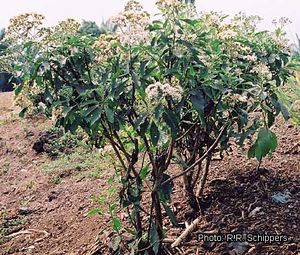 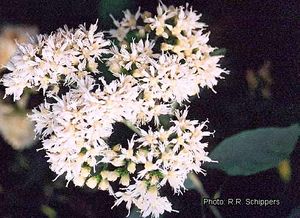 Vernonia amygdalina occurs wild in most countries of tropical Africa, from Guinea east to Somalia and south to north-eastern South Africa, and in Yemen. It is commonly grown as a vegetable in Benin, Nigeria, Cameroon, Gabon and DR Congo, and to a lesser extent in their neighbouring countries. The Luhya people in western Kenya use Vernonia amygdalina as a vegetable, but do not cultivate it.

Bitterleaf is a highly appreciated vegetable in West and Central Africa and can be consumed in various dishes. In Nigeria, where the Yoruba name for this crop is ‘ewuro’ and the Igbo call it ‘onugbu’, leaves are boiled in soups. Leaves are sometimes sold in the market after being shredded, parboiled and made into fist-sized balls. In Cameroon the processed leaves are cooked with meat and/or prawns mixed with ground peanuts to make a famous dish called ‘ndole’. Alternatively, whole leaves are cooked together with cassava or yam tubers, whereas the leaves are also dried and ground to powder for use in soups. In Cameroon the leaves are sometimes eaten unprocessed and raw mixed with palm oil and salt. The leaves are browsed by goats. Dry stems and branches provide fuel. Young twigs are used as toothpicks or chewing sticks. The plant is sometimes grown as a hedge. The branches are used as stakes to line fields.

Vernonia amygdalina is commonly used in traditional medicine. Leaf decoctions are used to treat fever, malaria, diarrhoea, dysentery, hepatitis and cough, as a laxative and as a fertility inducer. They are also used as a medicine for scabies, headache and stomach-ache. Root extracts are also used as treatment against malaria and gastrointestinal disorders. In Nigeria leaves are placed on a wound as a substitute for iodine. One of the most common medicinal uses of Vernonia amygdalina is as a treatment against intestinal worms including nematodes. Not only humans but also chimpanzees ingest the bitter pith of Vernonia amygdalina for the control of intestinal nematode infections. In Zimbabwe a root infusion is used to treat sexually transmitted diseases. Bark infusions are also taken to treat fever and diarrhoea, dried flowers against stomach disorders. Vernonia amygdalina is also useful as a control agent against diseases in plants. The ash from burnt branches is used to control seed-borne fungi (Curvularia, Aspergillus, Fusarium and Penicillium spp.) thus ameliorating seed viability and germination capacity. It has also been used for brewing beer as a substitute for hop. Vernonia amygdalina is a well-known bee plant.

The leaves are sometimes collected from the wild, but most people prefer leaves from selected and cultivated plants which are generally less bitter. Bitterleaf is usually grown for home consumption and less often for sale at the market, but there is an increasing tendency to sell the processed product rather than branches with leaves. In Cameroon processed leaves sell for up to five times the price of the raw commodity. Processed leaves are exported from West Africa in dried or deep frozen form and offered in major markets of African vegetables in Europe. No production statistics are available.

Leaves of Vernonia hymenolepis A.Rich. and some other Vernonia species are used for the same purposes as Vernonia amygdalina. Processed bitterleaf is an expensive product and for this reason unscrupulous dealers sometimes add other plant material to increase the volume.

Vernonia is the largest genus of the tribe Vernonieae with close to 1000 species; it occurs mainly in South America and Africa. More than 300 species have been described from Africa with about one third occurring in Madagascar. Apart from Vernonia amygdalina several species are eaten as vegetable, of which Vernonia hymenolepis is most important. Vernonia colorata (Willd.) W.F.M.Drake is closely related to Vernonia amygdalina. It differs in its more or less entire leaves and glabrous fruits. Leaves of Vernonia colorata are mainly collected from the wild, and its primary use is as a medicinal plant. Other species occasionally cultivated as a vegetable but more often collected from the wild are Vernonia cinerea (L.) Less. in Kenya, Vernonia poskeana Vatke & Hildebrandt in Zimbabwe, which are both also more important as medicinal plants, Vernonia appendiculata Less. in Madagascar and Vernonia perrottetii Walp. in Sierra Leone.

Vernonia amygdalina can grow into a tree, but in cultivation it is mostly pruned to a shrub or hedge. Once established in a garden, leaves or young shoots can be picked for up to 7 years, but for commercial production farmers prefer younger plants. Plants flower in the dry season (January and early February in West and Central Africa). Regular harvesting of the shoots stimulates new growth thus retarding flower initiation. Harvesting of only leaves hampers regrowth. Towards the dry season new leaves become smaller and become dark greyish green in colour; these are very coarse and bitter, especially those close to the inflorescence.

Vernonia amygdalina occurs naturally along rivers and lakes, in forest margins, woodland and grassland, up to 2000 m altitude. It often occurs in disturbed localities such as abandoned farmland, and can be found growing spontaneously in secondary forest. It requires full sunlight in cultivation. Flowering is induced by short days. It prefers a humid environment although it is fairly drought tolerant. It can be found on all soil types, but performs best in humus-rich soils.

Propagation is possible by seed, but most farmers use stem cuttings. Cuttings used for propagation from mature stems are selected on the basis of attributes such as degree of bitterness, leaf size and growth characteristics. In home gardens more than one type is often grown because young people prefer the sweeter, less bitter types and elderly people the more bitter ones. Cuttings may be planted erect or slanting at an angle of 45º to obtain more sideshoots. Cuttings grow faster than seedlings. Seed may be collected from dry flower heads. It is broadcast on nursery beds prepared of humus-rich soil and shaded from excessive heat and sunlight. Seed takes 2–3 weeks to germinate. During dry periods, it is important to water the nursery beds frequently. Some 4–6 weeks after emergence, seedlings can be transplanted. In home gardens people plant bitterleaf amongst other crops or as a hedge or live fence; in commercial fields it is planted in rows.

Weeding, mulching and the application of organic manure in the nursery stage contributes to healthy and rapid growth of seedlings and cuttings. A regular supply of moisture is important and irrigation is profitable during the dry season. Old branches should be pruned back to a low level to stimulate the production of larger, succulent and abundant foliage. This is best done before the arrival of the rains. When adequate water is available, it takes only about 3 weeks for fresh shoots to develop after pruning. Young plants are more productive than older ones and commercial farmers prefer to plant a new crop at the beginning of every new season or after the second year. They do not remove their old crop until they have been able to harvest the first regrowth at the start of the season because this commands a premium price.

Apart from a leaf curl virus, there are no major diseases that affect production. Pests do not cause major damage either, although many pest species have been recorded on bitterleaf in northern Nigeria. They include thrips, aphids, ants, white fly,Empoasa spp., Sphearocoris annulus, Fabricius spp., Ptyelus grossus, Polyclaeis spp. and Xanthochelus vulneratus. As a remedy, people traditionally sprinkle wood ash on the leaves to keep ants and aphids away. The bitterleaf weevil Lixus camerunus may damage stems and branches by making tunnels, causing branches to break.

During the rainy season, harvesting takes place by cutting the leafy shoots, allowing new side shoots to develop, which can be harvested a few weeks later. Stems of various lengths are cut in the afternoon and these are sorted and tied into bundles of equal length. Depending on the season, stems brought to the market have a length of 30–50 cm, often longer during the peak period. Bundles of 15–20 stems weighing 1–2 kg are often made, but smaller ones are made during periods of scarcity. The bundles are kept overnight, placed upright in a basin of water and sometimes covered with jute bags to avoid desiccation. The bundles themselves are tied together into bigger bundles before they are carried to the market. During dry periods people pick only the leaves and leave the shoots intact. Young pale green sprouts with large leaves grown under irrigation during dry periods fetch high prices in the market, because by this time most leaves of other plants are small and very bitter. Some commercial farmers do not harvest their crop during peak production times when home gardens can supply all vegetables needed and prices are low. By not cutting at this time there will be a better crop later in the season, when prices are expected to be higher.

Highest yields are obtained during the rainy season, the peak being in May–August. Production statistics are not available.

Leaves may be shredded and pounded in a mortar. During pounding foam develops. The foam and bitterness is removed by repeatedly rinsing the leaves with water between poundings. Salt or lime is sometimes added in the mortar to speed up the maceration. Leaves may be shredded and boiled first. Kneading the boiled leaves is sometimes sufficient, but often a pestle and mortar are used to soften them. The pounded leaves are rinsed until the water that drains off is no longer green. When the water is drained off the leaves are ready for use. They may also be sold as such, or preserved by drying (which somewhat changes the taste) or deep freezing. Alternatively, the leaves are pressed into fist-sized balls before they are marketed. A more bitter product is obtained by stopping the formation of foam during pounding by adding palm oil.

No germplasm collections of Vernonia amygdalina are known to exist. The plant grows in many African countries and under different conditions, so that there is probably ample diversity for plant breeders to select from. As commercial cultivars are not yet used, there is no threat yet of genetic erosion.

No cultivar research or any breeding activities take place at the official research centres, although farmers make and maintain their own selections.

Bitterleaf is an important vegetable in West and Central Africa, which, once established, is easy to produce and rather resistant to drought, making it popular in home gardens. The laborious and time-consuming task of processing bitterleaf has encouraged the commercialization of processed leaves. This processing is fast becoming a source of income in urban areas. Vernonia amygdalina has multiple medical properties that deserve further research. Research on genetic variability and agronomy is also needed.