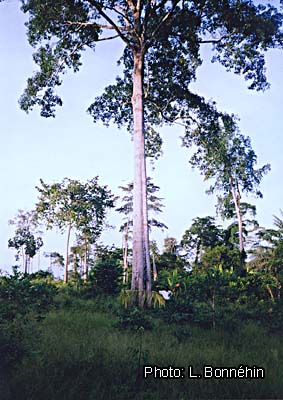 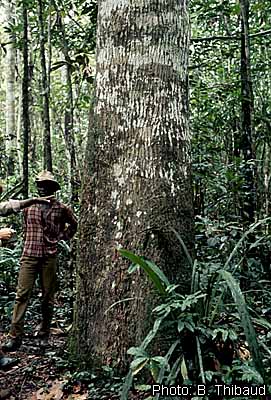 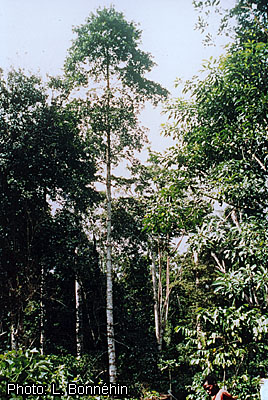 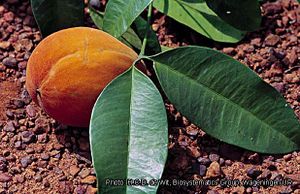 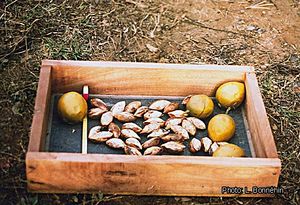 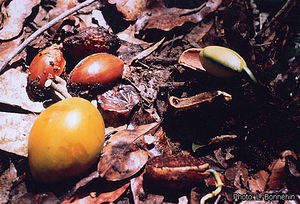 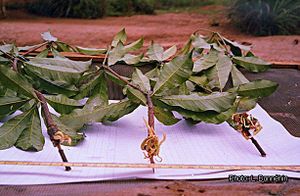 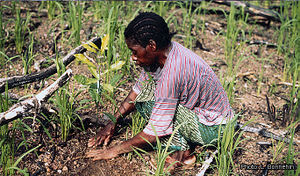 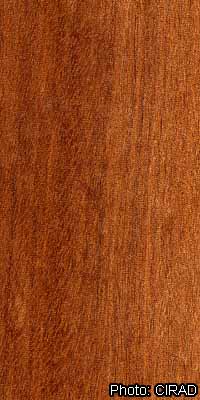 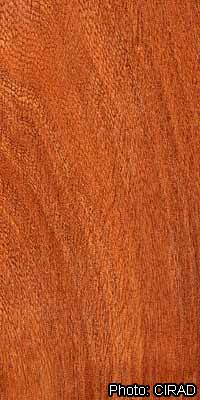 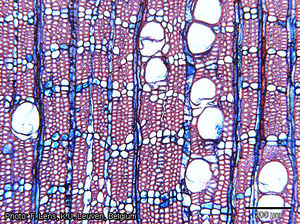 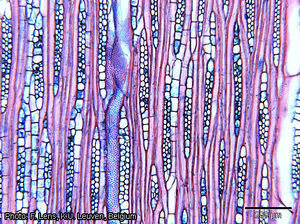 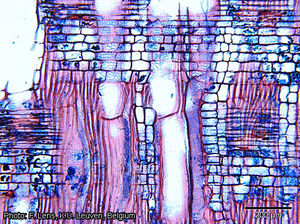 Tieghemella heckelii occurs in the West African forest zone, from Sierra Leone eastwards to southern Nigeria, but not in Togo or Benin.

The seed kernels (cotyledons, known as ‘baco’) are rich in an edible fat known as ‘dumori butter’ or ‘makore butter’, which is locally popular as a cooking or seasoning oil and often preferred to palm oil. The fat is also applied as a pomade to the body and hair, and used in soap production. The fleshy and very sticky pulp of the fruits is sometimes used as birdlime. The bark is reportedly effective for treating blennorrhoea and toothache, and in Liberia young buds are used to treat snake bites.

The data on wood properties of makore and douka cannot be separated in the literature, and the following description applies to both species. The wood resembles African mahogany (Khaya and Entandrophragma spp.), but the texture is finer. The heartwood is pinkish-, purplish- or reddish-brown with a silky lustre, often with a decorative figure in the form of flames or stripes; it is very distinctly demarcated from the up to 8 cm wide and pinkish white to greyish brown sapwood. The grain is straight or interlocked, texture fine and even.

The wood is somewhat difficult to work due to the presence of silica; blunting effects are moderately severe when sawing, and stellite-tipped sawteeth are recommended. The wood finishes well. Staining and polishing give good results. Pre-boring for nailing and screwing is recommended to avoid splitting. Gluing properties are good. The timber can be peeled satisfactorily.

The heartwood is rated as one of the most durable African timbers. It is resistant to termites and fungi. Damage by pinhole borers and powder-post beetles has been recorded occasionally. Although it is resistant to marine borers in temperate waters, the wood is not very durable in tropical (especially brackish) waters. The heartwood is very difficult to impregnate, the sapwood moderately easy.

Dust from sawn wood may cause irritation to skin and mucous membranes. It has been suggested that this is caused by the presence of saponins or the contact allergen 2,6-dimethoxy-1,4-benzoquinone. A highly haemolytic saponin has been isolated from the wood; on hydrolysis it gave d-glucose, l-rhamnose and d-xylose.

The fruit is sticky and juicy, with an unpleasant smell and bitter taste. The kernel comprises about 60% oil by weight. The oil is yellowish and semi-fluid, has no distinct flavour or taste (occasionally slightly spicy), and consists of about 51% oleic acid, 43% stearic acid, 3.5% palmitic acid and 2.5% linoleic acid.

Makore is used for similar purposes as African mahogany (Khaya and Entandrophragma spp.), but it is more durable. It is sometimes even traded as African mahogany. It is very similar to the wood of Tieghemella africana from Central Africa, which is often also traded as makore or douka.

The genus Tieghemella consists of 2 species and is closely related to Mimusops, which differs in having less-developed corolla tubes, smaller fruits, and seeds with smaller scars, copious endosperm and thin cotyledons. Tieghemella africana resembles Tieghemella heckelii and may be conspecific. The former differs in the longer, filiform median segment of the corolla lobes, larger staminodes and slightly smaller seed scar. A taxonomic study is needed to clarify the species limits and the status of the genus, which is complicated by the fact that the name Tieghemella was first published for a genus of fungi.

Trees develop according to Aubréville’s model: the monopodial trunk shows rhythmic growth, with whorled branches, which also grow rhythmically but modularly, each branch plagiotropic by apposition, the modules growing indefinitely.

Trees start flowering and fruiting after about 17 years, but sometimes after 10 years. Flowers open in the early morning, the corolla being shed in the afternoon of the same day. In Liberia, flowering is from February to May; ripe fruits can be found between October and December. In Côte d’Ivoire, flowering occurs from January to June, and ripe fruits can be found from August to March. A large tree produces approximately 3000–4000 fruits at a time. The fruits are eaten by elephants, which are probably the main seed dispersers; bush-pigs are also reported to feed on the fruits.

Tieghemella heckelii is often an emergent tree of the high forest. It is found in moist evergreen and semi-deciduous forests. Regeneration in these forests is reportedly reasonable, at least in Ghana; there is a strong preference for undisturbed forest. Young trees are very tolerant of shade, but can survive in full sun. Heavy soils are preferred.

Makore is easy to propagate. The seeds are heavy, 30–50 seeds/kg. Viability decreases rapidly. They should be planted within 2 weeks. In the nursery, seeds are usually planted at a spacing of 40 cm × 40 cm under light shade. Seedbeds should be watered well. Germination is over 90% in optimal conditions, and without pre-treatment. It begins after about 4 weeks, most seeds having germinated after 10 weeks, but it may continue for 16 weeks. Rodents may cause considerable damage to seeds and seedlings (cotyledons). Saplings of about 2.5 years old and 1–1.5 m tall are planted out into the field usually at the beginning of the rainy season, but in western Côte d’Ivoire 0.5 year-old seedlings are used.

Propagation by air layering and cuttings is successful. In a test with air layering, 39% of branches rooted after 8 weeks. The average rate of rooting of branch cuttings after 6 months was 73%. In neither case did the application of indole-butyric acid improve rooting success.

Makore has been planted on a very small scale (almost 6 ha), mainly for seed oil production, in western Côte d’Ivoire (near Taï National Park) with an average density of 357 stems/ha. It is often planted at a density of about 120 trees/ha, in association with coffee, cocoa, rubber or rice, and at field margins and in secondary forest following clearance of undergrowth.

Logs tend to split badly during felling. Logs of larger trees may be hollow.

Fat yield is 20–30 kg/tree per harvest. One kg of seed kernels yields about 200 g of fat when the traditional method of extraction is used.

Care should be taken when sawing makore wood because nasal and respiratory irritation may occur. To extract the oil, the seeds are split, and the kernels dried in the sun, roasted, pounded to a paste and boiled in water. The fat or oil is skimmed off from the water.

Tieghemella heckelii is reported to be rather rare in Liberia. The density in Côte d’Ivoire is low, and in many areas it is considered rare. In Ghana, it is fairly common, but under pressure as a result of forest exploitation, and deserves protection. The seeds are dispersed by elephants, which are becoming rare in West Africa and therefore limiting natural regeneration.

Tieghemella heckelii is included in the IUCN Red list of threatened species because it suffers both from habitat destruction and selective logging practices.

The prospects for planting programmes in West Africa using Tieghemella heckelii are good. Seed and vegetative propagation is easy. The species can be planted in open sites, grows fairly rapidly, and has a fairly open crown structure which permits good light penetration, making it suitable for use in agroforestry programmes. The wood, and fat from the seeds, are of excellent quality. However, planting for fat production may be uneconomic as it takes a rather long time for trees to fruit after planting, and fat yields are limited. Planting is needed to take pressure off wild populations.