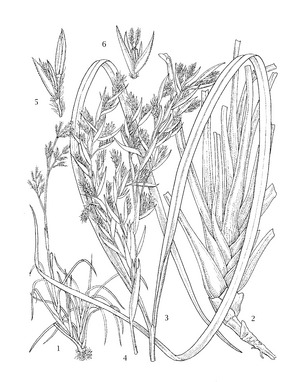 The exact origin of C. citratus is not known but a Malesian origin is most likely. C. citratus is only known from cultivation and it has been cultivated for several centuries in South and South-East Asia. After the First World War large-scale cultivation was taken up in South and Central America and later in Madagascar and nearby islands and in Africa. Lemongrass is now found cultivated and often naturalized throughout the tropics and warm subtropics e.g. in southern parts of the Russian Federation and northern Australia. It is very commonly cultivated throughout South-East Asia both as an industrial and as a garden crop, e.g. in Java it is planted in nearly every home garden.

The original use of C. citratus leaves was probably as a food and beverage flavouring, but it is currently grown both for its essential oil and as a condiment. The earliest references from India to lemon-scented waters made from C. citratus date back several centuries. Fresh leaves crushed in water are still used in India as a hair wash and toilet water. In the perfume industry the oil, consisting mainly of citral, is an important starting material for the production of α- and β-ionones, which in low concentrations have the odour of violets. As a condiment, C. citratus is grown in home gardens throughout South-East Asia. In Java, leaf sheaths are added to spicy sauces e.g. "sambal goreng" and "sambal petis" and to cooked fish and fish sauces, while the heart of young shoots is eaten as a side dish with rice. It is also a popular constituent of many curries. In Java, it is used in making a popular sherbet ("bandrek" in West Java, "serbat" in East Java). Lemongrass is excellent for planting on bunds for soil conservation, and as a mulch. Sometimes it is grown for cellulose and paper production. Lemongrass has carminative and anticholeric properties and is applied in traditional medicine against several intestinal problems and the oil is used as a massaging agent against rheumatism. West Indian lemongrass is used in Chinese medicine to treat a great variety of ailments, including eczema, colds, headache, stomach-ache, abdominal pain and rheumatic pain. External application of the oil provides effective control of ticks in cattle and several ectoparasites in chicken. Spent grass mixed with bagasse and made into silage is a common cattle feed in lemongrass-producing areas.

On steam distillation C. citratus leaves yield West Indian lemongrass oil. Lemongrass oil is a yellow or amber-coloured, somewhat viscous liquid with a very strong, fresh-grassy, lemon-like, herbaceous or tea-like odour with an earthy undertone reminiscent of Ceylon citronella oil. The main chemical constituent of the oil is citral, a mixture of the stereoisomers geranial and neral. The geranial content is 40-62%, the neral content 25-38%. Other components include myrcene, limonene, and geraniol. The solubility of freshly distilled oil of C. citratus declines rapidly in storage, due to polymerization of myrcene. East Indian lemongrass oil contains no or very little myrcene and is more soluble in alcohol. Lemongrass oil from the Ethiopian highlands has a very low citral content (14%) and also differs in the composition of minor components.

West Indian lemongrass oil has been approved for food use by the Food and Drug Administration (FDA) of the United States under paragraph 182.20. The oil has been "generally recognized as safe" in the United States (GRAS No 2624) and is registered by the Council of Europe under No 38n. Lemongrass oil is used in food products, including alcoholic and nonalcoholic beverages. The Research Institute for Fragrance Materials (RIFM) has published a monograph on the physiological properties of lemongrass oil. See also: Composition of essential-oil samples and the Table on standard physical properties.

West-Indian lemongrass oil has antibacterial and anti-fungal properties and is used medicinally e.g. in homeopathic drugs.

Lemongrass oil is rarely adulterated; the citral content being the quality criterion of overriding importance. Litsea cubeba (Lour.) Persoon is an important alternative source of citral. Synthetic citral is too costly to be used as an adulterant.

C. citratus tillers strongly and the number of tillers is directly correlated with the number of leaves and with oil yield. Only young, expanding leaves synthesize and accumulate essential oil. The root system is rather superficial. In most places C. citratus flowers very rarely or not at all. Plants usually do not become older than 4-6 years.

Most of the about 55 species of Cymbopogon Sprengel are aromatic grasses, mainly confined to the Old World tropics and subtropics (in South-East Asia, about 13 species occur in addition to the cultivated ones). The aromatic oil in the leaves sometimes remains perceptible for a very long time, even in dried specimens (e.g. in 3000-year-old Egyptian tombs).

C. citratus grows best under sunny, warm and humid conditions. It performs best below 500 m altitude, but is grown up to 750 m in Madagascar and the Comoros. Average daytime temperatures of 23-30°C without extremely low night temperatures are optimum for growth and yield. Short periods with a daily maximum temperature over 30°C do not harm growth but severely reduce oil content. Hot dry winds may not only desiccate the crop but can also evaporate the oil. Frost is normally fatal. Water requirement is very high, the highest yields are obtained where the average annual rainfall is 2500-3000 mm evenly distributed over the year. Up to 5000 mm is tolerated on well drained soils. Long periods of dry sunny weather strongly reduce herbage yield and oil yield, although oil content is generally higher during the dry season. Good drainage is the most important soil requirement for C. citratus and in many countries plantations are on sandy soils, though loamy soils are used e.g. in China, Madagascar and Vietnam. Generally, soils of C. citratus plantations have a pH of 5.5-7.5, although good growth has been observed in Australia on a clay soil with pH 9.6. Good growth was also found on acid peat soils in Sarawak, Malaysia (pH 4.5). Saline soils are considered unsuitable, although fair growth and oil yield on saline soils have been obtained in greenhouse experiments.

As C. citratus only rarely produces seed it is usually propagated vegetatively. Well-grown, healthy plants from mature or exhausted plantations are dug up and divided into offshoots; a single plant clump yields 50-200. The size of offshoots used depends on local preference; larger shoots normally root quicker and grow faster. Offshoots are cut back to 10-15 cm, trimmed of dead and excess roots and are preferably treated with fungicide. The use of growth hormones is not necessary. Planting is mostly done on the flat, 10-15 cm deep, at a spacing of 50-90 cm × 50-60 cm. In Guatemala lemongrass is commonly grown in rows 120 cm apart with 30 cm between plants. A high plant density maintained by filling in gaps is required for high yields. Deep planting and earthing-up may be beneficial on sandy soils, but on heavy soils those practices are not advisable as the young plants are susceptible to root rot. C. citratus is rarely intercropped when grown for its oil, as it needs ample water and full sunshine, but e.g. in Malaysia it has been underplanted in young rubber plantations to help defray the cost of plantation establishment. When grown as a condiment, C. citratus is mostly grown in home gardens, interplanted with many other crops.

Careful weeding of lemongrass is extremely important, as weedy grasses may quickly invade a new plantation and once established are very difficult to remove. After establishment of the plantation, weeding is usually done after each harvest. C. citratus is often irrigated. Small farmers usually irrigate after each harvest, large estates irrigate whenever water stress may affect growth. In the Ord Valley in Western Australia, irrigating every 10 days during the dry season gave the highest yields. Limited water stress prior to harvesting generally reduces herbage yields, but increases oil content, thus reducing the cost of transport while maintaining oil yield.

West Indian lemongrass is generally considered to have a modest nitrogen requirement, but experimental data on fertilizer requirements are very scarce. Small farmers in India commonly return spent grass as compost at a rate of 5 t/ha supplemented with 2 t/ha wood ash; a similar practice is reported from Guatemala. For chemical fertilizers, a basic dose of 30 kg each of N, P2O5and K2O, followed by 60 kg N per year in split applications after each harvest is commonly recommended. It is recommended to remove diseased and dead plants and spot spraying with a herbicide after each harvest. In cultivation the economic life of C. citratus rarely exceeds 4-5 years.

Helminthosporium cymbopogi causes a serious leaf-spot disease in lemongrass resulting in great damage in Guatemala. Curvularia lunata causes another leaf disease, starting with elongated, discoloured lesions that ultimately become brown with a paler border. Brown-tip disease is a physiological disorder, resulting from a low water content of the leaves at the end of the dry season. No serious pests of C. citratus are known.

First harvest of leaves of lemongrass may start about 6-8 months after planting. Subsequently leaves can be cut 3-6 times per year during 4-6 years. In South America the cutting cycle is generally maintained at 3-4 months, which is believed to promote tillering and leaf yield. Cutting begins when the morning dew has dried, as wet grass very easily starts to ferment. When harvesting manually, plants are cut at about 10 cm above the ground. Mechanical harvesters are adjusted to cut at about 20 cm. In trials, cutting at a height of 20 cm gave the highest yields. To reduce the amount of green material to be transported and distilled, small farmers sometimes harvest only the top parts of the leaves. After several harvests plants are pruned back to promote regrowth. Burning is sometimes used as an alternative to rejuvenate a plantation.

The average annual herbage yield of lemongrass is 30-50 t/ha, yielding 75-250 kg lemongrass oil (0.25-0.50%). Under good management annual yields of this magnitude can be maintained during 4-6 years of plantation life. Herbage yield of 100 t/ha has been achieved under optimum circumstances, and with efficient management and improved selections the oil yield can be increased to 0.4-0.6%. Harvesting the top parts gives an oil yield of 0.6%, while the lower parts yield only 0.15%. In hilly districts in the Philippines, oil content of naturalized C. citratus is about 0.25% during the cool season and 0.35-0.5% during the hot, dry season.

Wilting the herbage of lemongrass before distillation reduces moisture content and has little effect on oil yield, but increases citral content. Drying in full sunlight often reduces oil content, but has little effect on oil quality. Drying for up to 3 days prior to distillation is common. The leaves of C. citratus are steam-distilled to extract the essential oil. In Indonesia wilting for 2 days and distilling for 1.5 hours has given the highest yields (0.43%). Increasing distillation time resulted in higher yields but reduced citral content. Adding salt to the distillation water increases yield, e.g. up to 30% in Puerto Rico. Spent grass can be dried, composted and returned to the field or used as fodder.

Several institutions in South and South-East Asia are involved in germplasm collection and conservation of aromatic grasses. Systematic collection of germplasm of Cymbopogon began at the Lemongrass Breeding Station, Odakkali, Kerala, India as early as 1951. The collection now has over 450 accessions. Other major institutions include: the Research Institute for Spice and Medicinal Crops (RISMC), Bogor, Indonesia; the Thailand Institute of Scientific and Technological Research (TISTR), Bangkok, Thailand; the University of the Philippines, Los Baños, the Philippines; the Central Institute of Medicinal and Aromatic Plants, Lucknow, India and the National Board of Genetic Resources, New Delhi, India. There are no known breeding programmes for C. citratus.

Lemongrass oil from C. citratus is likely to remain an important source of citral for use in low-cost perfumery, while its use as a masking fragrance in deodorants, detergents and pesticides is still growing. However, the essential oil from Litsea cubeba is a serious competitor.