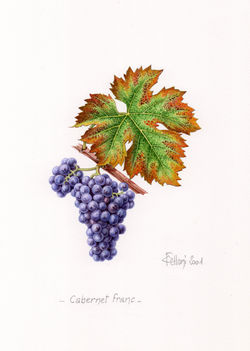 subsp. vinifera. The cultivated grape. Cultivated in many cultivars between 30° and 50° N and 30° and 40° S. In Germany viticulture reaches its northern border at 51° 30' N. - The grapevine needs an annual average temperature of 10-12°C, 180-200 days of growing season and at least 1.330 hours of sunshine in the year. In the flowering period the daily temperature must be more than 15°C. During fruit ripening an average monthly temperature of 18,7°-23,7°C is necessary. Grapevine is cultivated in all appropriate areas of the world. Important producers are in Europe: Spain, Italy, France, Portugal, Romania, Yugoslavia, Hungary, Greece, Bulgaria, Germany, Austria, Czechia, Slovakia, Switzerland, Albania; the former Soviet Union; in Asia: Turkey, Iran, Afghanistan, India, Syria, Cyprus, China, Israel; in the Americas: Argentina, USA, Chile, Brazil, Mexico, and in Africa: Algeria, South Africa, Morocco, Tunisia, also Australia and New Zealand. The berries are eaten fresh as table grape or dried as raisins, sultanas (seedless large berries), currant (small, seedless), Damask raisins (dried on the plant), stewed or variously processed (e.g. juice). Most of the grapes is made to wine (white, red, rosé or sweet wine) or champagne. Through distillation of wine spirits, brandy and other hard drinks are obtained. The seeds yield the grape kernel oil. The residues of wine production (pomace) is used as fodder, manure or to make tartaric acid. Especially in Italy the pomace is used for making grappa. In the Orient cooked berries are used to make grape honey and grape cakes. Several thousands of cultivars are grown in viticulture. Many of them are hybrids. The species listed in the following table (after Mullins et al. 1992) have been used as cross-partner mainly for resistance breeding of V. vinifera. The history of cultivation of grapevine is not yet fully understood. It is reported that the beginning of viticulture is in the Neolithicum (6.000-5.000 BC) along the eastern coast of the Black Sea in the Transcaucus. Archaeological finds of grape seeds show that V. vinifera, probably subsp. sylvestris had been present throughout much of Europe during Atlantic and Sub-Boreal periods (7.500-2.500 years ago). During the 4th mill. BC viticulture and wine making reached Asia Minor and somewhat later the Nile delta. Here the technology of viticulture and wine production was well developed at 1.400 BC. It is supposed that viticulture was brought to China from Asia Minor in the time of the Han dynasty (2nd cent. BC). To Greece and Balkan Peninsula viti-culture came between 2.200 and 1.400 BC. In the first mill. BC Phoenicians and Greek introduced viticulture to N Africa, S Italy, France and Spain. The Romans introduced it into Germany to the valley of the Rhine and 300 AD viticulture and wine-making is spread all over Europe. Viticulture started in the USA in 1850 (for V. × alexanderi see V. labrusca).
subsp. sylvestris. Ancestor of the cultivated grape. In Middle Asia it is mostly impossible to distinguish truly wild and feral forms. Wild distribution: S and Central Europe, NW Africa, Turkey, CIS (Moldova, S Ukraine, Caucasus and Transcaucasus), Iran, Afghanistan, Middle Asia, Kashmir.