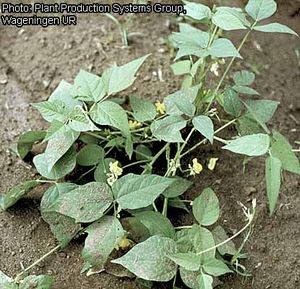 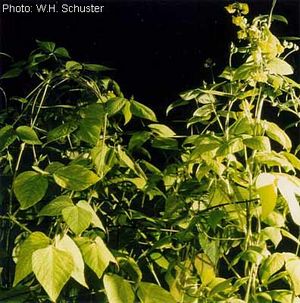 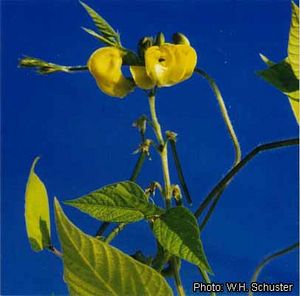 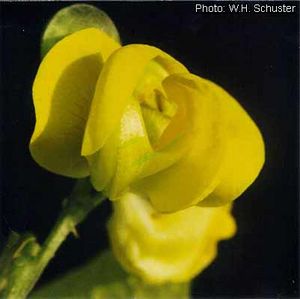 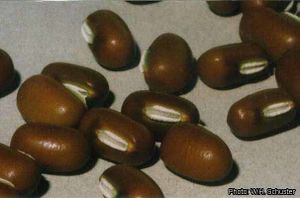 Rice bean originates from Asia, where it is found wild from India and central China through Indo-China to Malaysia. It was introduced by the Arabs into Egypt, along the eastern coast of Africa and to the Indian Ocean islands. Nowadays, rice bean is widely cultivated in tropical Asia, and to a more limited extent in Fiji, the United States, Australia, south-western Asia and tropical Africa and America. In tropical Africa it is grown in West Africa, East Africa and the Indian Ocean islands, and less frequently in Central and southern Africa.

Mature, dry rice bean seeds are eaten as a pulse. They are usually boiled and eaten with rice or instead of rice, often in soups or stews, e.g. in Ghana. In Madagascar flour of dried germinated rice bean seeds is included in complementary foods for children. Rice bean is not very popular in India, because it cannot easily be processed into dhal as it contains a fibrous mucilage, which prevents easy hulling and separation of the cotyledons.

The leaves, young pods and sprouted seeds of rice bean are eaten boiled as a vegetable. In India the young pods are sometimes eaten raw. The whole plant is used as fodder and made into hay and silage. The seeds are sometimes used as feed for livestock. Rice bean is also sown as a cover crop, green manure and living hedge.

Rice bean production statistics are not available, but the crop is mainly produced in tropical Asia. Little of the rice bean production enters international trade. Japan is the main importer; the main exporters are Thailand, Myanmar and China. Madagascar also exports some rice bean; its average annual export in 1998–2000 has been estimated at 1100 t.

Vigna comprises about 80 species and occurs throughout the tropics. However, the tropical American species are likely to be placed in a separate genus in the near future, which would reduce the genus to 50–60 species. Vigna umbellata forms part of the subgenus Ceratotropis, which also includes Vigna radiata (L.) R.Wilczek (mung bean), Vigna mungo (L.) Hepper (black gram), Vigna angularis (Willd.) Ohwi & H.Ohashi (adzuki bean) and Vigna aconitifolia (Jacq.) Maréchal (moth bean). Vigna umbellata is closely related to Vigna angularis, with which it can be crossed using embryo culture and with rice bean as the female parent. Vigna minima (Roxb.) Ohwi & H.Ohashi, a wild species from tropical Asia, is even more closely related to Vigna umbellata.

Within Vigna umbellata 2 types have been distinguished, commonly designated as varieties:

Rice bean seedlings grow vigorously and establish themselves quickly. In Madagascar time to flowering is 70–75 days, time to seed maturity 100–135 days. In Angola the time from sowing to maturity can be as short as 60 days. In the Philippines time to flowering averages 64 days, to maturity 92 days; in India early-maturing types behave likewise, whereas late types ripen in 130–150 days. Flowers are self-compatible, but cross-pollination also occurs.

Rice bean is typically suited to humid tropical lowlands, but some cultivars are adapted to subtropical or temperate conditions. It is found in areas with average temperatures of 18–30°C. It is susceptible to frost. In the tropics the crop can be grown up to 2000 m altitude. In Madagascar it is grown up to 1000 m altitude. Rice bean prefers a rainfall of 1000–1500 mm/year; it tolerates moderate drought. It is a quantitative short-day plant. Rice bean can be grown on a wide range of soil types, but grows best on fertile loams. The optimum pH is 6.8–7.5. Wild rice bean types are found in open locations and on roadsides.

Rice bean usually receives little care. Seedlings are able to smother weeds due to their vigorous growth. Fertilizers are seldom applied to a rice bean crop, although in India superphosphate at a rate of 17–26 kg P per ha is recommended. In Asia rice bean was formerly widely planted after the harvest of the traditional long-season rice crop (hence the name ‘rice bean’), but multiple cropping of short-duration rice cultivars has led to a decline of this practice.

Rice bean is seldom seriously affected by diseases and pests, but it is susceptible to root-knot nematodes (Meloidogyne spp.). Rice bean seeds are considered resistant to storage pests such as the bruchids Callosobruchus analis, Callosobruchus chinensis and Callosobruchus maculatus, due to the presence of compounds in the cotyledons with growth-inhibiting effects on them.

The viny habit and the shattering of pods make rice bean difficult to harvest. Harvesting of mature seeds, green pods and leaves is usually by hand. If grown for fodder, rice bean should be harvested when the pods are immature, since the leaves drop easily when the plant reaches maturity. As a green manure, rice bean can already be ploughed at about 30 days after sowing.

Rice bean seeds are normally dried in the sun and threshed by hand. The seed stores well.

Rice bean is a valuable crop that deserves more testing throughout the tropics, because of its tolerance of high temperature and humidity, short crop cycle, resistance to diseases and pests, nutritious seeds and multiple uses. Limitations of rice bean production are low yields and easy shattering of the pods, which make harvesting difficult. Limited availability of germplasm and the lack of technical information on its cultivation are serious bottlenecks. The possibilities of industrial processing of the seeds into derived products, such as flour, are still poorly known. Research priorities for rice bean include the development of quick-maturing, day-neutral, high-yielding and non-shattering, erect cultivars that are nematode-resistant. Moreover, investigations are needed on agronomical aspects (e.g. time of sowing, plant density and fertilizer requirements) and post-harvest technology.