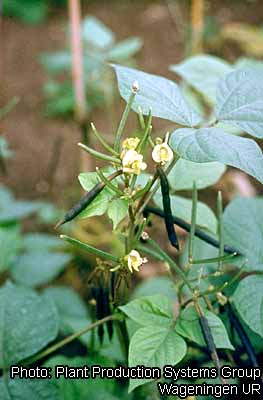 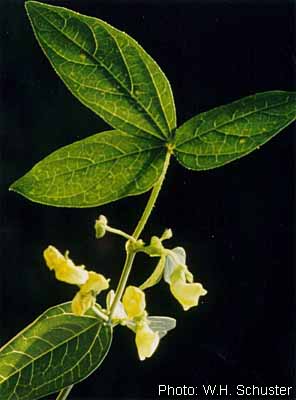 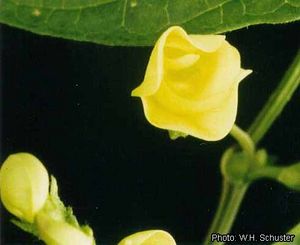 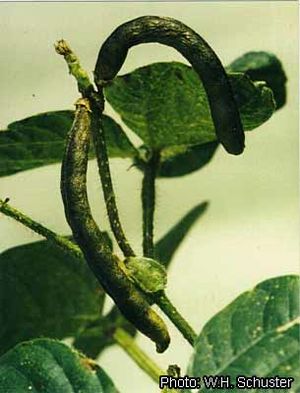 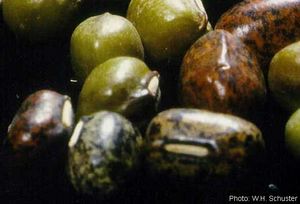 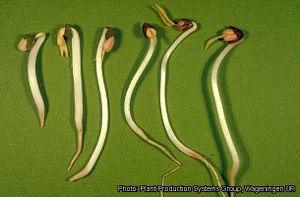 Mung bean originated in India or the Indo-Burmese region where it has been cultivated for millennia. The ancient cultivation of mung bean in India is supported by fossilized remains discovered in central India and dated 1500–1000 BC. Mung bean cultivation spread in early times to most other Asian countries and later to Africa, Australia, the Americas and the West Indies. It has not become a major crop outside Asia, although mung bean is cultivated in many tropical African countries. In certain areas of Kenya, especially the Eastern Province, mung bean is the principal cash crop.

Mature mung bean seeds or flour enter a variety of dishes such as soups, porridge, snacks, bread, noodles and even ice-cream. In Kenya mung bean is most commonly consumed as whole seeds boiled with cereals such as maize or sorghum. Boiled whole seeds are also fried with meat or vegetables and eaten as a relish with thick maize porridge (‘ugali’) and pancakes (‘chapatti’), whereas consumption of split seeds (dhal) is common among people of Asian descent. In Ethiopia the seeds are used in sauces. In Malawi the seeds are cooked as a side dish, mostly after removing the seed coat by grinding. In India and Pakistan the dried seeds are consumed whole or after splitting into dhal. Split seeds are eaten fried and salted as a snack. The seeds may also be parched and ground into flour after removing the seed coat; the flour is used in various Indian and Chinese dishes. The flour may be further processed into highly valued starch noodles, bread, biscuits, vegetable cheese and extract for the soap industry. Sprouted mung bean seeds are eaten raw or cooked as a vegetable; in French they are erroneously called ‘germes de soja’, in English ‘bean sprouts’.

Immature pods and young leaves are eaten as a vegetable. Plant residues and cracked or weathered seeds are fed to livestock. Mung bean is sometimes grown for fodder, green manure or as a cover crop. The seeds are said to be a traditional source of cures for paralysis, rheumatism, coughs, fevers and liver ailments.

The wild types of mung bean, which are usually smaller in all parts than cultivated types, are usually classified into 2 botanical varieties:

The cultivated types of mung bean are grouped as Vigna radiata var. radiata, although a classification into cultivar groups would be more appropriate. Two types of mung bean cultivars are usually distinguished, based mainly on seed colour:

Two additional types are recognized in India, one with black seeds and one with brown seeds.

The minimum temperature for seed germination of mung bean is about 12°C, the optimum temperature around 25°C. Seedlings emerge in 3–7 days. Mung bean is a short-duration crop, flowering within 30–70 days and maturing within 50–120 days after sowing. Self-pollination is the rule, but up to 5% outcrossing may occur. Flowers are usually pollinated during the night, before they open early in the morning. It takes 3–4 weeks from flower opening to mature pod. Flower abscission is prevalent and may reach 90%. Mung bean mostly has a determinate growth habit, but because the inflorescences remain meristematic and may redevelop flowers after a period of adverse conditions, it flowers and fruits over a period of several weeks. Green leaves, open flowers, green pods and ripe pods occur simultaneously on the same plant. A large part of the dry matter accumulated during seed filling may still be partitioned to vegetative parts and thus rapid senescence does not occur. Mung bean nodulates readily with Bradyrhizobium strains from the cowpea cross-inoculation group. Because those strains are rather common, mung bean shows little response to inoculation.

Mung bean is a warm-season crop and grows mainly within a mean temperature range of 20–40°C, the optimum being 28–30°C. It can therefore be grown in summer and autumn in warm temperate and subtropical regions and at altitudes below 2000 m in the tropics. It is sensitive to frost. Mung bean is mostly grown in regions with an average annual rainfall of 600–1000 mm, but it can do with less. It withstands drought well, by curtailing the period of flowering and maturation, but it is susceptible to waterlogging. High humidity at maturity causes damage to seeds leading to seed discoloration or sprouting while still in the field. Mung bean cultivars differ markedly in photoperiod sensitivity, but most genotypes show quantitative short-day responses, flower initiation being delayed by photoperiods longer than 12–13 hours.

Mung bean grows in a wide range of soil types, but prefers well-drained loams or sandy loams with pH (5–)5.5–7(–8). Some cultivars are tolerant to moderate alkaline and saline soils.

Mung bean is propagated by seed. The 1000-seed weight is 15–40 g. There is no seed dormancy, but germination can be affected by a hard seedcoat. Mung bean is broadcast or dibbled in hills or in rows. Recommended sowing rates are 5–30 kg/ha for sole cropped mung bean, and 3–4 kg/ha under intercropping. Recommended spacings are 25–100 cm × 5–30 cm. For the more modern cultivars ripening in 60–75 days, maximum yields are obtained at plant densities of 300,000–400,000 plants/ha. The later-maturing traditional cultivars generally need wider spacing. Recommended spacings for sole-cropped mung bean in Kenya are 45 cm between rows and 15 cm within the row, with a seed rate of 6–10 kg/ha and a sowing depth of 4–5 cm.

Mung bean can be grown mixed with other crops such as sugar cane, maize, sorghum or tree crops in agroforestry systems. Short-duration mung bean is often relay-cropped to make use of a short cropping period. In Kenya mung bean is usually intercropped with maize, sorghum or millet; it is occasionally grown in pure stands or intercropped with other pulses. The usual practice here is to place 1–2 rows of mung bean between rows of a cereal, or to plant mung bean in the cereal row.

In pure stands, 1–2 weedings are necessary during the early stages of growth. In Kenya weeding is done using hoes and machetes. Farmers do not normally apply any inorganic fertilizer to a mung bean crop. Mung bean uses residues from fertilizer applications to the main crops in the system, though it responds well to phosphorus. Nutrient removal per t of seed harvested (dry weight) is 40–42 kg N, 3–5 kg P, 12–14 kg K, 1–1.5 kg Ca, 1.5–2 kg S and 1.5–2 kg Mg. The nutrient removal is much higher when crop residues are removed to be used for fodder.

In its major area of cultivation, the monsoon tropics, mung bean is mainly grown as a rainy season crop on dryland or as a dry-season crop after the monsoon in rice-based systems on wetland, making use of residual moisture or supplementary irrigation. In some areas where adequate early rains occur, an early-season crop can be grown before the monsoon. In semi-arid regions of Kenya with 600–800 mm rainfall evenly distributed over 2 rainy seasons, 2 mung bean crops are grown per year. In the Wei Wei Integrated Development Project in Sigor, Kenya, mung bean is grown under irrigation. In India mung bean is often sown as a fallow crop on rice land as a green manure.

When grown for the mature seed, mung bean is usually harvested when the pods begin to darken. Harvesting is highly labour intensive as the pods of most local cultivars of mung bean are highly susceptible to shattering and mature at different times. Mung bean is generally harvested in 2–5 hand-pickings at weekly intervals. In Kenya individual pods are picked as they mature. Where the crop matures uniformly, the entire plant is harvested and sun-dried before threshing. Short-duration cultivars, which ripen more uniformly, may be processed as whole plants with small rice threshers. Cultivars differ markedly in harvesting efficiency, depending on position (above or within canopy) and size of pods.

Average mung bean yields are low: 300–700 kg/ha. Under irrigation in Kenya yields are obtained of 1.25 t/ha. Yields over 3 t/ha have been obtained in trials.

Handpicked pods are dried in the sun. Shattering can be speeded up by beating with a stick or by trampling. Seed is cleaned by screening and winnowing, and dried to a moisture content of 10–12% before storage. Properly dried mung bean seeds maintain high viability over a long period. Seed stored by small farmers for sowing is often of poor quality because of bruchid damage.

To prepare mung bean sprouts, the seeds are soaked overnight, drained, placed in containers in the dark, sprinkled with warm water every few hours, and kept for 4–5 days at a temperature of 24°C and a relative air humidity of 60–70%. One kg of mung bean seed produces 6–10 kg sprouts.

In many traditional mung bean growing regions farmers still grow old landraces. Many cultivars have been developed from those landraces by pure-line selection. The traditional late robust types may be replaced by new types useful for short seasons and multiple cropping systems with mung bean occupying the land for short periods between major crops. These new types are short plants with high harvest index, reduced photoperiodic sensitivity and a relatively uniform maturity. Many modern cultivars with improved resistance to major diseases and pests have been released in the major producing countries. Sources of resistance have been identified in germplasm of mung bean and related species. Among the Asiatic Vigna species, black gram (Vigna mungo) shows most promise for interspecific hybridization with mung bean. AVRDC in Taiwan is working on the development of mung bean tolerant to diseases (leaf spot, powdery mildew) and pests (bean fly, bruchids).

Mung bean is a suitable crop for tropical Africa, especially the semi-arid regions, because of its short crop cycle and nutritional quality. Furthermore, it has a niche on the international market for the production of bean sprouts. However, it has not yet become important in tropical Africa, which may be due to its low yields, susceptibility to diseases and pests, high labour requirement (weeding, harvesting), lack of suitable cultivars and good quality planting material, and lack of information on its potential benefits. It therefore deserves increased attention from research and extension.