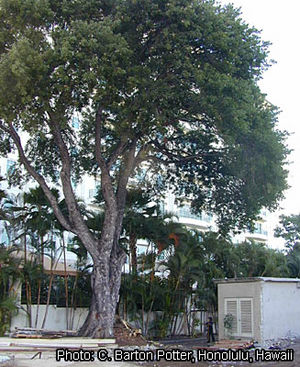 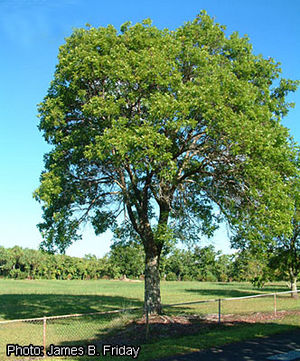 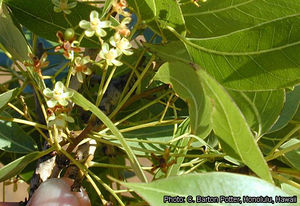 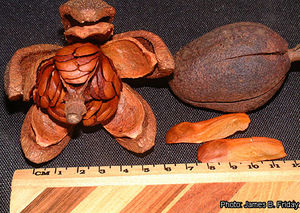 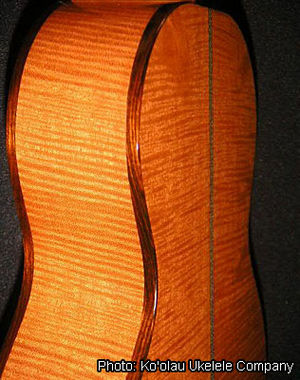 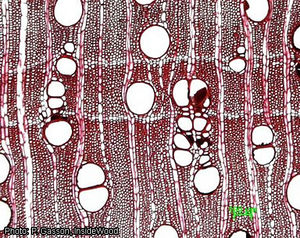 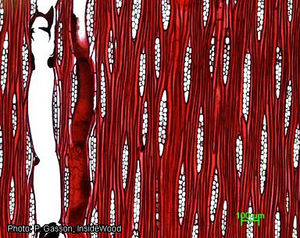 Swietenia mahagoni is native to southern Florida and the islands of the Caribbean Sea. The wood has been internationally traded for over 400 years. Small-leaved mahogany was introduced in India from the West Indies in 1795, and since then has been planted throughout the tropics on a small scale in timber plantations and as an ornamental, occasionally also in tropical Africa. Attempts to introduce small-leaved mahogany to tropical African countries (e.g. Nigeria, Kenya, Uganda and Tanzania) were largely unsuccessful due to the severity of shoot borer attack on young plants. It has been planted more successfully in Réunion and Mauritius, and small-scale plantations exist in Egypt. It is occasionally planted in gardens, e.g. in Senegal and Mozambique.

Swietenia wood (mahogany) is regarded as the world’s finest timber for high-class furniture and cabinet work. Its popularity is especially due to its attractive appearance in combination with ease of working, excellent finishing qualities and dimensional stability. It is also often used for interior trim such as panelling, doors and decorative borders. It is used for boat building, often as a decorative wood for luxury yachts and ocean liners, but sometimes also as plywood for planking and deck housing. Its outstanding technical qualities make it particularly suitable for precision woodwork such as models and patterns, instrument cases, clocks, printer’s blocks and parts of musical instruments; for these purposes, uniform straight-grained material is used. Other minor uses include burial caskets, wood carvings, novelties, toys and turnery.

An oil can be extracted from the seed kernels which might be of some commercial value. The bark has been used for dyeing and tanning leather. Various medicinal uses of various parts of the tree are reported from tropical America. The crushed fruit shells have been used as a potting medium. Swietenia mahagoni is also used in reforestation programmes and as a shade tree in young plantations of other timber species, and is occasionally planted as an ornamental.

Swietenia mahagoni is no longer traded commercially as a result of intense over-harvest in the past. Only small quantities of plantation-grown timber are occasionally available on the international market, in which Africa plays no role.

Small-leaved mahogany wood is a medium-weight hardwood, which is comparatively soft. The heartwood is reddish or pinkish, the colour darkening with age to a deep red or brown, distinctly demarcated from the usually yellowish sapwood, which is up to 40 mm wide. The density of the wood is 560–850 kg/m³ at 15% moisture content, with that of plantation-grown trees often somewhat less than that of trees from the forest in the natural area of distribution. The grain is interlocked, sometimes straight, texture fine to moderately coarse. The surfaces are glossy, and the wood is often nicely figured because of the irregular grain.

At 15% moisture content the modulus of rupture is 54.5 N/mm², modulus of elasticity 9555 N/mm², compression parallel to grain 37 N/mm², shear 7–7.5 N/mm², cleavage 55 N/mm radial and 63.5 N/mm tangential, Janka side hardness 3840 N and Janka end hardness 3840 N. The rates of shrinkage are low. The wood seasons well, without much checking or distortion and kiln dries satisfactorily when moderate schedules are used. After drying, the wood is stable in service.

The wood saws, planes and moulds easily in both green and dry condition. In general it finishes to a smooth surface, but a woolly surface may occur on bands of reaction wood or interlocked grain. Finishing is easy and the wood takes an excellent polish. Gluing and nailing properties are good, but discoloration in contact with iron, copper and brass may occur under humid conditions. The wood slices and rotary cuts into fine and decorative veneer, without preliminary treatment, at a peeling angle of 92°.

Swietenia comprises 3 species and is most closely related to Khaya, which differs in more globose fruits and seeds which are narrowly winged all round the margin. The 3 Swietenia species are difficult to distinguish from each other. Swietenia mahagoni differs from Swietenia macrophylla King in its smaller leaflets, fruits and seeds, and from Swietenia humilis Zucc. in its stalked and shortly acuminate leaflets (sessile and long-acuminate in Swietenia humilis) and dark brown seeds (pale brown in Swietenia humilis). The natural distribution areas of the three species show only very slight overlap, but in areas where 2 species occur hybrids may be found.

Healthy seeds start germinating about 15 days after sowing. Young trees have straight and slender stems, and branches are formed 2–3 m above the ground with a position oblique to the main stem. Initial growth is fast, depending on site conditions. The seedlings and saplings are intolerant of deep shade and exhibit their fastest growth with overhead light and lateral shading. The average diameter growth in permanent plots in Cuba was 0.55 cm/year.

The tree is evergreen in its natural habitat, but may lose its leaves during the dry season in seasonal climates. Flowering trees have about 10 times as many male as female flowers, which are very similar. Trees are sometimes functionally dioecious. In mixed inflorescences, male flowers open first, but self-pollination may occur. The flowers are pollinated by bees, moths and thrips. Fruits may be produced once a year, but mast production of seeds occurs irregularly. Mature fruits can be found 8–10 months after flowering. The seeds are provided with a thin tail-like wing that makes them rotate when they fall, and are thus dispersed by wind as far as 500 m from the mother tree.

Under natural conditions small-leaved mahogany thrives in both dry and moist forest, often on limestone, up to 800 m altitude. The optimum annual rainfall is 1000–1500(–2500) mm with a dry period of 0–4 months. Swietenia mahagoni grows in areas with a mean annual temperature of 15–32°C, with 11–12°C in the coldest month. It is largely unspecific as to soil requirements, but grows best on well-drained, rich but sandy soils.

Ripe fruits must be collected to achieve a good germination rate of seeds. The fruits open after 2 days of storage and the seeds have a germination rate of 60–95%. The seeds can be stored up to 2 months at ambient temperatures, or up to one year if kept cool (2–5°C) in sealed containers at about 45% relative humidity.

Seeds are sown in the nursery in drills of 2–4 cm deep, or they are pushed into flat beds, leaving part of the wing exposed. Seed germination starts after about 10 days and continues for about 20 days. The seed bed should be well manured and shaded, but after 3–4 weeks the seedlings grow best with only lateral shading. Seedlings may have a 70% survival rate, even if planted during the dry season, provided they are partially shaded and watered whenever soil moisture drops below 30%. For field planting, bare-root stock, balled seedlings, stumps (stem length 20 cm, root length 20–40 cm, diameter of root collar 0.5–2.5 cm) or striplings are used. Cuttings are relatively easy to establish from 3-year-old plants, but more difficult later. Spacing in the field is usually 2–3 m × 2–3 m. In Egypt spacings of 2 m × 2 m have been used; wider spacing (3 m × 3 m) had no effect on bole diameter growth. Profuse natural regeneration has been found under many mature mahogany plantations, and this may be used to establish the next crop, reducing nursery and plantation establishment costs. However, it is usual to plant seedlings raised in nurseries.

Monoculture plantations of mahogany are susceptible to pests, and for that reason mixed plantations with other fast-growing species are often preferred. Early pruning is needed for a proper bole form. Thinning usually starts 6 years after planting, and progressively reduces the number of trees to 220–400 trees/ha in plantations of 20 years old, and to 120–150 trees/ha in 35-year-old plantations. The rotation is usually 40–60 years.

Several fungal diseases affecting seedlings have been reported in tropical Asia and islands of the Pacific, but these rarely cause serious damage. Shoot-boring moths of the genus Hypsipyla are the major limitation to plantation establishment, and this is also the case in tropical Africa, where Hypsipyla robusta is also a major pest in Entandrophragma and Khaya plantations. In Mauritius young Swietenia mahagoni trees are also attacked by this pest. Under nursery conditions attack by Hypsipyla can be successfully controlled with insecticides. Ambrosia beetles may attack the wood, creating ‘pin-holes’ visible in sawn timber. Termites may also cause damage in plantations.

Mahogany plantations are clear-cut when the rotation age has been reached (40–60 years), and subsequently replanted with nursery-raised seedlings. Average annual volume increments of Swietenia mahagoni plantations are usually slightly lower than those of Swietenia macrophylla. The logs float in water and can be transported by river. The sapwood is susceptible to staining; an anti-sapstain dip should be used during drying.

Natural populations of small-leaved mahogany have been depleted through centuries of commercial exploitation. It is considered to represent a prime example of genetic erosion resulting from past exploitation of preferred genotypes (long, straight boles), with populations remaining almost entirely composed of highly branched trees. It has been included in Appendix II of CITES since 1992, which makes it subject to strict regulations concerning export and trade. There is no restriction for trade and export of plantation-grown timber.

A major problem in mahogany plantations is the susceptibility to Hypsipyla attack, Swietenia mahagoni often being even more susceptible than Swietenia macrophylla. The latter species or hybrids between the two species seem to be more promising for plantation establishment, also because of higher growth rates, in addition to African mahogany (Entandrophragma and Khaya).