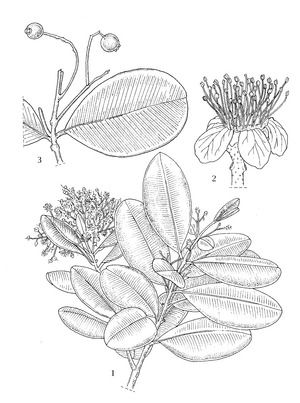 P. racemosa occurs naturally in northern South America and throughout the Caribbean. It is cultivated in the Caribbean, south-eastern United States, Cameroon and India. Bay rum was probably first produced in the Virgin Islands. The main producers of bay leaf oil from P. racemosa are the Caribbean islands Dominica and Puerto Rico. P. racemosa has been grown experimentally in Bogor (Indonesia) and in Singapore, but did not perform well.

Traditionally, the leaves of P. racemosa are distilled with rum to produce bay rum, which has soothing and antiseptic properties and was formerly a very popular toilet water and hair tonic. It is reported that bay rum is occasionally drunk in Trinidad. On water or steam distillation the leaves yield bay leaf oil (sometimes called myrcia oil). The oil is used in perfumery, mainly in cosmetic products, such as hair lotions, aftershaves and other toiletries for men.

Bay leaf oil is often converted into terpeneless bay leaf oil by removal of the monoterpene hydrocarbons. Bay rum is now prepared by mixing this oil with rum. Terpeneless bay leaf oil blends excellently with many aroma materials and is used in many perfumes and perfume bases. Although the components of this oil are readily available from other sources, there is no really suitable substitute for it. The oil is used on a limited scale for flavouring foods, chiefly sauces. The dried green berries have a spicy flavour with hints of cinnamon, clove and nutmeg and are used as a spice.

The hard and heavy, fine-grained wood is used in carpentry, for making walking sticks, and for posts. It splits easily and is excellent fuel.

Bay rum tree has many uses in traditional medicine, mostly based on the antibiotic properties of the phenols in the oil. A tea from the leaves is drunk as a stimulant and against colds and fever.

Major producers of bay leaf oil are Dominica and Puerto Rico, but no statistics are available on production and trade. In New York bay rum fetches a wholesale price of US$ 35/kg (1998).

The leaves of Puerto Rican bay rum trees contain 1-3.5% essential oil, the highest content occurring in regions of lower rainfall (1100 mm annually), the lowest in more humid areas (2200 mm annually); in individual trees it may reach 5%. Bay leaf oil is distilled from P. racemosa var. racemosa and is a yellowish to dark brown liquid. Its odour is fresh-spicy, somewhat medicinal, but it has a lasting, sweet-balsamic undertone. To some people the sensory properties of the oil can be quite offensive, sickly sweet and nauseating; others perceive it as quite fresh and pleasant. Its flavour is warm, almost pungent, spicy and somewhat bitter. The chemical composition of bay leaf oil is variable. The main chemical components are eugenol and myrcene, while chavicol and methyl eugenol occur in variable amounts. In the production of terpeneless bay leaf oil, the terpenes (mostly the monoterpenes with a low boiling point) are removed by vacuum distillation. Myrcene is the most important compound removed. Oxygenated compounds with a low boiling point such as citral and 1,8-cineole may be removed by careless distillation. Terpeneless bay leaf oil is a pale straw-coloured to brownish-orange liquid with an intensely sweet, deep and mellow spicy-balsamic odour and lemon-like top note that is less pronounced than in the "crude" oil. It is easily dissolved in diluted alcohol, which is an advantage as it is often used in preparation with a low alcohol content, such as hair lotions. An absolute can be prepared by extracting the "crude" oil with alcohol. The absolute contains neither monoterpene nor sesquiterpene hydrocarbons.

Bay rum used in hair dressings and aftershaves may cause irritation of the skin. Contact dermatitis caused by the components eugenol and phellandrene has been reported.

Bay oil is approved for food use by the Food and Drug Administration of the United States and is "generally recognized as safe" (GRAS).

The botanical classification in varieties does not match well with the variation in the chemical composition of different samples of P. racemosa. Two different oils distilled from var. racemosa have been reported: a "lemon" type and an "anise" type. Both types are reported from the Caribbean island Guadeloupe and may have been introduced into Java in the 1880s. The "lemon" type is rich in citral (geranial and neral); the "anise" type contains mainly methyl eugenol and estragol (methyl chavicol). Samples of var. hispaniolensis were characterized by thymol and @c-terpinene, 1,8-cineole and methyl eugenol, 1,8-cineole and methyl chavicol or 1,8-cineole and terpinen-4-ol, while samples from var. ozua were high in 1,8-cineole and α-terpineol. The essential oil from var. grisea was characterized by trans-methyl isoeugenol, methyl eugenol or geraniol. Var. grisea is so common and has such a negative effect on the quality of the oil that it is called "false bay rum tree".

See also: Composition of essential-oil samples and the Table on standard physical properties.

The heartwood is very hard, heavy (specific gravity 0.9), strong and durable. It is resistant to attack by dry-wood termites.

Although P. racemosa is evergreen, individual trees shed their leaves every 2-3 years. Flowering in the Caribbean is mainly from April-August, fruiting from August-October. Fruits are eaten by birds, which are the main dispersal agents for the seed. The life of plantations is indeterminate, as trees regenerate from stumps, but the effect of regular harvesting on the life expectancy is not known. Individual trees of 50 years old are known.

Several varieties are recognized in P. racemosa : var. racemosa , the most common and widespread variety, probably native to the Lesser Antilles, Puerto Rico and Cuba; var. hispaniolensis (Urban) Landrum and var. ozua (Urban & Ekman) Landrum are endemics to north-central Hispaniola; var. grisea (Kiaerskov) Fosb., a common forest tree below 800 m altitude in Hispaniola, Puerto Rico and Tortola with dense, fine, grey to white hairs on the underside of leaves, young twigs, flower stems and fruits; var. terebinthina (Burret) Landrum, endemic to the Dominican Republic. Within var. racemosa several chemotypes have been described which are morphologically similar, but are distinguished by their smell, reminiscent of either clove, lemon or anise.

Other Pimenta species also yield essential oils, of which the most important one is pimento or allspice (P. dioica (L.) Merrill). Its fruits are mainly used as a spice, but also yield an essential oil named pimento berry oil, whereas its leaves yield pimento leaf oil. Both oils are used industrially as substitutes for allspice. Eugenol is their main component.

Confusion is possible with the word "bay". Bay leaf oil refers to oil obtained from the leaves of P. racemosa. Bay leaf, however, is also a common name for the leaf spice Laurus nobilis L. (Lauraceae) from the Mediterranean which is also called sweet bay, laurel or bay laurel and from which an essential oil can be produced. Oil obtained from the Californian bay or California olive originates from Umbellularia californica (Hook. & Arn.) Nutt. (Lauraceae).

P. racemosa prefers an annual rainfall of 2500 mm evenly distributed over the year with few months with less than 200 mm rainfall, but natural stands occur in areas with only 750 mm annual rainfall. Although trees grow well with 1250-1500 mm annual rainfall, regrowth following pruning is too slow for commercial plantations to be profitable. It grows best at temperatures of 15-35°C; temperatures below 15°C having a more adverse effect on growth than temperatures higher than 35°C. Frost is not tolerated. Trees are found up to 750 m altitude. Clear sunny weather promotes leaf growth and reduces the incidence of leaf diseases. Leaf-oil content is often highest during periods of warm, dry weather. Growth is best on deep fertile loamy soils with a slightly acid to neutral pH, but most plantations are on marginal soils on slopes, better soils being allocated to food crops.

Propagation of P. racemosa is mostly by seed. Seedlings may be collected from natural stands or are grown in nurseries. In the Caribbean mature fruits are usually collected in August-October. When collecting seed or seedlings from the wild care should be taken to avoid those of var. grisea. Seed is removed from the fruit, washed and planted within 2 days. Germination generally takes 2-6 weeks. Seedlings are ready for transplanting to the field in 18-24 months. Before planting the stem is topped to 15 cm and the taproot is pruned to 7 cm to encourage lateral rooting. Some fertilizer may be applied at planting. An application of 250 g of a 10-10-10 compound NPK fertilizer mixed with surrounding topsoil and compost and applied in the plant hole is recommended. After planting, protection from direct sunlight until the seedling is well established is beneficial. Vegetative propagation is rarely practised, but budding which is applied successfully to P. dioica is probably suitable for P. racemosa as well. Spacing is determined mainly by topography; on flat land 2-5 m × 5-10 m is common.

Topped seedlings of bay rum tree often produce several main shoots. Two main shoots are sometimes retained, since experience has shown that foliage yield is higher than from single-stemmed trees. After 2-3 years trees are topped at 3-5 m and are maintained at that height. P. racemosa coppices well and misshapen or diseased trees can be cut back to ground level, allowing a new shoot to grow from the stump. Weed control is generally limited to slashing grass and other vegetation between the trees. Care should be taken to remove spontaneous seedlings of P. racemosa that do not yield commercially acceptable bay leaf oil. Fertilizer is rarely applied after planting, although large amounts of nutrients are removed with the leaves. Spent leaves and ash from the distilleries are often returned to the field.

The most serious disease of P. racemosa is a leaf rust caused by Puccinia psidii, which covers young leaves, shoots and inflorescences with a bright yellow mass of spores. Severe infection results in defoliation and successive attacks severely weaken trees and may kill young ones. The disease is most common in areas where fog or heavy dew occurs frequently. A dieback or canker, known in the Caribbean as fireblight, caused by Ceratocystis fimbriata affects older trees. The disease is widespread, but outbreaks can be very local.

Leaf-eating caterpillars are the most damaging pests. Bag-worms (Oeceticus abboti) and related species are often recorded. Whiteflies, thrips and weevils also cause some damage. Black ants cause damage by transferring scale insects between trees and by making harvesting unpleasant.

Well managed groves of bay rum tree are harvested once a year or 3 times in 4 years. The harvesting interval depends more on the age of the leaves than on the rate of regrowth. Leaves are shed after 2-3 years, so a harvesting interval longer than 2 years may result in reduced yields. Harvesting can be done year-round. Where there is a dry period, harvesting during this period is preferred. It is not clear whether the higher yield during this period is due to a higher leaf oil content or to a higher proportion of mature leaves. Where labour costs are low, small twigs and leaves are plucked from the trees, packed in bags and taken to the distillery. Alternatively, branches are cut and taken to the distillery where leaves are removed. Per day a person can harvest about 300 kg leaves.

Leaf yield of bay rum tree in established groves may vary between 8-35 t/ha (oil content 1-3.5%) due to differences in location and management.

No germplasm collections of P. racemosa are known to be maintained. Since there is ample leaf supply from natural stands and cultivated trees to satisfy current oil demand, hardly any selection of high-yielding trees has been undertaken.

Bay leaf oil is a minor essential oil and its production is well established in the Caribbean. Production in South-East Asia is only worthwhile if P. racemosa performs well and if production costs can be maintained at a substantially lower level than elsewhere in the world.