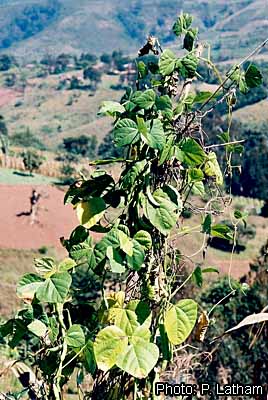 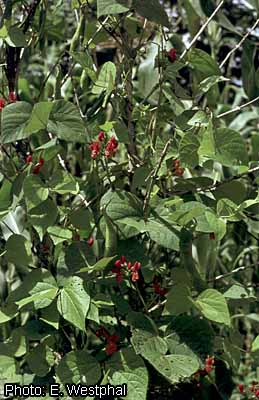 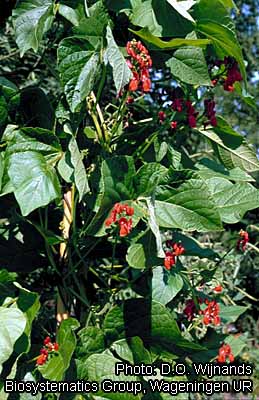 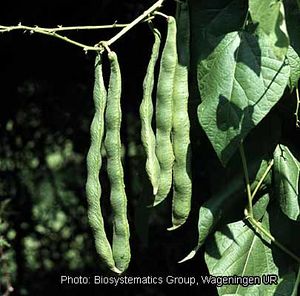 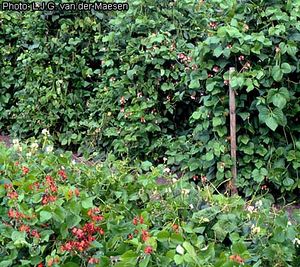 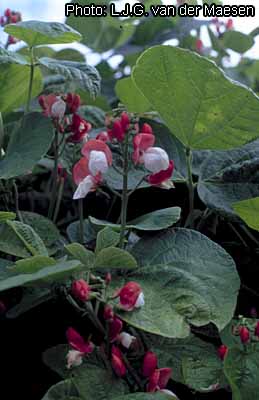 Scarlet runner bean occurs wild from Mexico to Panama. It was probably domesticated in Mexico. Archaeological evidence indicates that scarlet runner bean was a domesticated crop in Mexico around 900 AD. Nowadays scarlet runner bean is cultivated in temperate countries and occasionally in highland areas of Central and South America, Africa (e.g. Ethiopia, Kenya, Uganda, South Africa) and Asia. It is probably cultivated in Madagascar and is recorded as being grown in the eastern part of tropical southern Africa, although no specific countries are mentioned.

In Central America the immature and mature seeds are consumed, elsewhere mainly the mature seeds, e.g. in Ethiopia. Preparation is predominantly by boiling. In temperate regions the immature pods are most commonly eaten, sliced and cooked, as a vegetable. In Central America the young shoots, leaves and inflorescences are sometimes used (boiled or boiled and fried) as a vegetable while the tuberous roots are consumed boiled or chewed as candy. A root decoction is taken against malaria or applied to swollen eyes. In Central America scarlet runner bean is grazed by livestock and dried into hay. It is grown as an ornamental.

Accurate production statistics for scarlet runner bean are not available. Production is almost exclusively for local use. Commercial production of the pods is done in the United Kingdom and Argentina and of the seeds of white-seeded cultivars in South Africa. In Kenya scarlet runner bean is mainly grown by smallholders.

The tuberous root of scarlet runner bean is edible, but it is fibrous and may contain toxic compounds, which can be removed by soaking or peeling and by discarding the cooking water.

Coccinin, a peptide isolated from the seed of scarlet runner bean, has shown antifungal activity against a range of fungi. It also inhibited proliferation in leukaemia cell lines and reduced the activity of HIV-1 reverse transcriptase.

Phaseolus comprises about 50 species, most of them in the Americas. Phaseolus coccineus is closely related to Phaseolus dumosus Macfad. (synonym: Phaseolus polyanthus Greenman; year-bean, sometimes also called runner bean) and Phaseolus costaricensis Freytag & Debouck. Hybrids between Phaseolus coccineus and these 2 species have been obtained; natural hybridization also occurs. The 3 species can be crossed with common bean (Phaseolus vulgaris L.), with the latter as female parent, without embryo rescue, although progenies may be partially sterile. Where scarlet runner bean and common bean grow together, natural hybridization may occur. Hybridization of scarlet runner bean with tepary bean (Phaseolus acutifolius A.Gray) is also possible.

Scarlet runner bean is adapted to a wide range of soils, but it prefers deep, well-drained, loamy, light- to medium-textured soils, with pH 6–7. Waterlogging is not tolerated.

Scarlet runner bean is normally propagated by seed, but the tuberous root with a piece of stem can also be used. The 1000-seed weight is 700–3000 g. The seedbed should be well prepared and weed free. Normal planting densities are 50,000–75,000 plants/ha for climbing types and double those for bushy types, requiring about 75 kg and 150 kg seed per ha, respectively. However, lower densities have also been recorded. In Mauritius scarlet runner bean is sown in rows 100 cm apart with 30 cm within the row. The sowing depth is 2.5–5 cm. In Central America scarlet runner bean is often intercropped with maize.

To obtain high-quality pods, scarlet runner bean is grown on trellises, poles, fence lines or other support structures. However, labour and material requirements are high and may impede cultivation. Climbing types can yield without support if leading shoots are pinched out to induce bushy growth. Scarlet runner bean should be kept weed-free during the early growth stages and it is commonly weeded once or twice. Tillage should be shallow to avoid root damage. Supplementary irrigation is beneficial. In Ethiopia scarlet runner bean is a garden crop.

Green pods of scarlet runner bean are harvested when pod length reaches its maximum before the phase of rapid seed development. Picking is usually at 4–5 day intervals. For dry seed production, plants are pulled or cut when most pods are dry and then allowed to dry for a few days. Alternatively pods may be handpicked in several rounds because of asynchronous ripening.

Breeding efforts for scarlet runner bean have been directed to improvement of culinary quality (stringlessness) and disease resistance. Selection to improve cooking quality is promising since seed proteins of scarlet runner bean are more polymorphic than those of common bean. For dry seed production, improvement of plant habit and shorter pods are appropriate objectives of selection. Cultivars with a determinate growth habit suitable for mechanical harvesting (‘Venere’ and ‘Alarico’) have been developed in Italy, by crossing Phaseolus coccineus with determinate Phaseolus vulgaris cultivars and repeated backcrossing with Phaseolus coccineus.

In vitro plant regeneration of scarlet runner bean is possible using cotyledons, through direct organogenesis as well as somatic embryogenesis via callus.

Scarlet runner bean is a suitable pulse and vegetable crop for the humid highland tropics, although the need to provide support and the uneven maturation of the pods are serious drawbacks for commercial production. Scarlet runner bean may have some potential at higher altitudes in tropical Africa, but more information is needed on appropriate sowing and management practices. It is a potential source of resistance to diseases and pests affecting common bean.