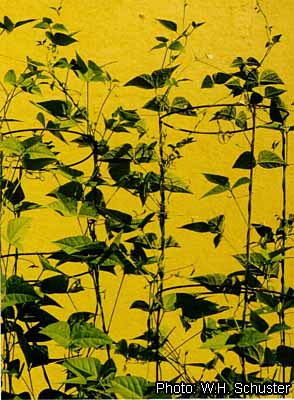 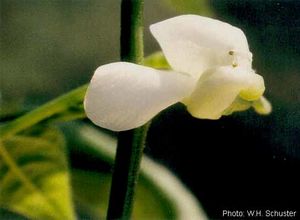 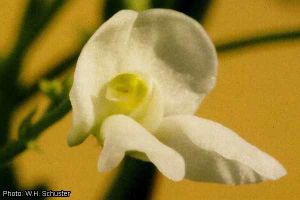 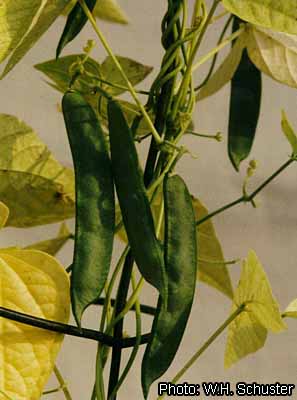 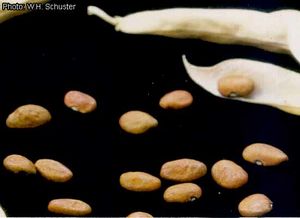 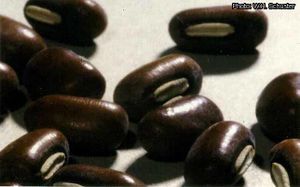 Tepary bean is an ancient crop of the south-western United States and northern Mexico. Recent studies indicate that the earliest remains of domesticated tepary bean, found in Tehuacán Valley, Mexico, date from around 2300 years ago. Isozyme analysis suggests that domestication took place in a single geographic region, with the Mexican states of Jalisco and Sinaloa being potential candidates. Today, wild types are distributed from the south-western United States (Arizona, New Mexico, Texas) to Guatemala, with the core of their distribution in north-western Mexico. Tepary bean is also cultivated in the southern United States and Central America. Cultivation of tepary bean decreased strongly after World War II, but nowadays the crop is regaining interest. Tepary bean has been introduced and is cultivated in Africa, Asia and Australia. It was introduced into francophone West Africa, Central Africa, East Africa and Madagascar between the first and second World Wars, and is now grown there and as far south as Botswana. Tepary bean is also recorded as being grown in Morocco, Algeria, South Africa, Swaziland and Lesotho.

Tepary bean is mainly grown for its mature dry seeds, which are eaten after boiling, steaming, frying or baking. They are used in stews and soups, and mixed with whole-grain maize. In Uganda the dry seeds are usually boiled and then coarsely ground before being added to soup. Occasionally it is eaten as a green bean or as bean sprouts. The leaves are considered edible in Malawi, but are tougher than those of common bean (Phaseolus vulgaris L.) and take longer to cook. Pods and stems remaining after removing the seed may be used for animal feed. In Botswana the seeds are a common supplementary feed for chickens. Tepary bean has occasionally been grown for fodder or green manure, e.g. in the United States. It may be used as a cover crop and an intercrop in agroforestry systems.

Tepary bean is mainly grown in Mexico and Arizona (United States). Large-scale commercial production was tried in the early 1900s, but efforts were abandoned due to its unfavourable morphological characteristics compared to the common bean, changes in eating habits and lack of information on its performance. Tepary bean has recently gained importance in semi-arid parts of tropical Africa, e.g. in Sudan, north-eastern Kenya, Uganda and Botswana, where most other grain legumes fail due to drought and where short-duration crops are often needed. Production is mainly for domestic consumption, and no production and trade statistics are available.

Per 100 g edible portion the composition of dry tepary bean seeds is: water 8.6 g, energy 1478 kJ (353 kcal), protein 19.3 g, fat 1.2 g, carbohydrate 67.8 g, fibre 4.8 g, Ca 112 mg, P 310 mg, thiamin 0.33 mg, riboflavin 0.12 mg, niacin 2.8 mg and ascorbic acid 0 mg (Leung, Busson & Jardin, 1968). As with other pulses, the seeds are low in the sulphur-containing amino acids methionine and cystine (0.9–1.3% and 0.8–1.3% of total amino acids, respectively). With respect to antinutritional factors, such as trypsin inhibitors, flatulent oligosaccharides and phytic acid, tepary bean is similar to cowpea and chickpea; the lectin activity is exceptionally high, but is readily reduced by cooking, whereas cyanogenic glucosides have not been detected. Consumption of raw tepary bean flour has been recorded to cause death in mice and rats within 3–4 days, but soaking and cooking the seeds eliminated toxicity completely. Tepary beans have a strong flavour and odour and are less palatable than common beans. On storage the dry seeds become very hard and take a long time to cook. Cultivars with white seeds have a more permeable seedcoat than cultivars with black seeds, resulting in a shorter cooking time.

Phaseolus comprises about 50 species, most of them in the Americas. Three varieties of Phaseolus acutifolius have been distinguished, based on the shape of leaflet and seeds. Var. acutifolius and var. tenuifolius A.Gray comprise wild types from south-western United States and north-western Mexico, whereas var. latifolius G.F.Freeman comprises wild and cultivated types. Isozyme and AFPL analyses have shown no clear-cut differentiation between var. acutifolius and var. tenuifolius.

Tepary bean seeds absorb water easily; in moist soils the testa wrinkles within 5 minutes, in water in 3 minutes. This leads to quick germination. Seedling emergence is faster in white-seeded than in dark-seeded types. The seeds of domesticated types have no dormancy, which is a disadvantage in humid regions, where fallen seeds will germinate rapidly. The rate of germination increases with increasing temperatures from 10°C to 35°C. Flowering occurs within 27–40 days. Self-pollination occurs before anthesis. In the tropics, short-duration types may mature within 2 months, but most types have a growth period of 70–90 days. In cooler regions, such as coastal Algeria, the growth period averages 120 days. The seeds of many domesticated types of tepary bean are shattered less easily than those of wild types.

Tepary bean is particularly suited to arid regions as it is tolerant of drought, heat and a dry atmosphere. Factors contributing to the drought tolerance of tepary bean are sensitive stomata, closing already at relatively high water potentials, and a deep and extensive root system. Tepary bean is found in regions with a mean annual temperature of 17–26°C; the minimum night temperature should not drop below 8°C. It can grow in areas with an annual rainfall ranging from 500–1700 mm, but where annual rainfall exceeds 1000 mm, vegetative growth is usually excessive, at the expense of seed yield. After flowering little or no rain is needed. In most of Africa, tepary bean is grown as a short-season crop, but in the more humid parts it is grown year-round. In Mexico and Arizona it is usually grown at medium altitudes. Some types require short days for flowering, but others seem day-neutral.

Light, well-drained soils are preferred; reasonable yields can be obtained on poor sandy soils with pH 5–7. Tepary bean does not tolerate waterlogging, and heavy clays are unsuitable. It is moderately tolerant of saline and alkaline soils. The salt tolerance may not be physiological but result from its ability to escape salinity due to its root system going deeper than that of e.g. common bean.

Weeding of tepary bean is essential, particularly during early growth. It requires little weeding, however, when it is grown as an ‘end-of-season’ crop. Little is known about its nutrient requirements, and its response to nitrogen and potassium fertilizers is not consistent. Irrigation may be applied, but is not usual. In intercropping the cultural practices for the main crop are applied to tepary bean. In Senegal and Mali tepary bean is grown as a kitchen garden vegetable.

Leafhoppers (Empoasca kraemeri) and pod borers (Epinotia opposita) were found in water-stressed trials. Several lines have shown resistance against the former, but the mechanism was non-preference rather than antibiosis. The Mexican bean beetle (Epilachna varivestis) and the potato leafhopper (Empoasca fabae) have been found to cause damage to tepary bean. Some resistance to the black bean aphid (Aphis fabae) and the lesser corn stalk borer (Elasmopalpus lignosellus) has been observed. The hard seed coat makes the seed resistant to storage pests such as bruchid beetles (Callosobruchus and Acanthoscelides spp.). In Uganda, however, the rice weevil (Sitophilus oryzae) has been recorded in stored seed.

Pods on the same tepary bean plant do not usually mature simultaneously, and as pods may shatter if left to dry up in the field, they are normally harvested by hand as soon as they change colour, usually 2.5–3 months after planting. Sometimes whole plants are pulled up by hand. Normally the pods are dried for a few days before they are threshed. In Africa beating the dried pods or plants with sticks is common practice to thresh tepary bean.

Unlike most other pulses, tepary bean seed stores well and it hardly needs storage pest control.

Tepary bean is generally resistant to diseases and pests, tolerant to drought, heat and salinity and has a short crop cycle. Prospects for selection are favourable, as sufficient variation in resistance to biotic and abiotic stress factors exists within the species. Except for some mass-selected populations, no improved tepary bean cultivars have been released to farmers. Rather, its favourable traits have mainly been targeted to improve common bean instead of tepary bean itself. Resistance to common bacterial (bean) blight, for instance, has been transferred into common bean through interspecific hybridization. In attempts to cross Phaseolus acutifolius with Phaseolus vulgaris, artificial cross-fertilization does not pose problems, but post-zygotic barriers usually prevent normal embryo development, and, as a rule, no viable hybrids are obtained. Embryo rescue through in-vitro culture is normally required to complete hybridization successfully. Through recurrent backcrossing with alternating parents the hybrids become cross-fertile with both species. However, genes obtained from common bean tend to be predominant in these hybrids. Seeds have also been obtained from a cross involving a Phaseolus acutifolius accession (NI 576) without in-vitro culture. Agrobacterium-mediated genetic transformation of this accession has been achieved, based on regeneration from callus. This has opened up the possibility of using Phaseolus acutifolius to introduce transgenes into the economically more important Phaseolus vulgaris.

Tepary bean seems a very suitable crop for resource-poor farmers in Africa, since its rapid germination, deep root system and short life cycle make it well adapted for production in arid or semi-arid regions. Reasons for reluctance to adopt tepary bean as a food include the small seed size, the tendency to cause flatulence, the long cooking time, the laboriousness of the harvest, and its strong flavour and, according to some, objectionable odour. However, in northern Kenya and Nigeria, traditional dishes prepared with tepary bean instead of cowpea were found very acceptable. To promote tepary bean in Africa, the selection of high-yielding cultivars, the development of food products (protein supplements) with reduced odour, and the creation of a marketing infrastructure are a prerequisite.