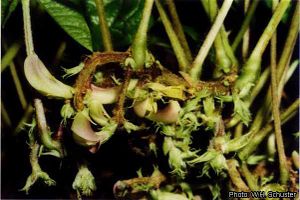 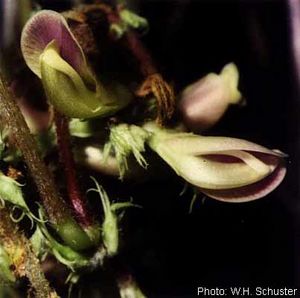 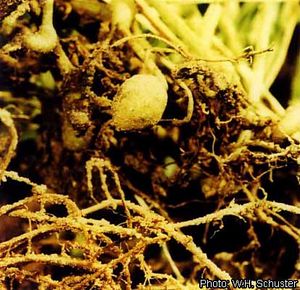 Kersting’s groundnut is cultivated primarily for its edible seeds. Mature seeds are boiled with salt and eaten with palm oil or groundnut oil, and accompanied with fermented cassava flour, called ‘gari’, yams or rice. They may also be boiled in soups and served to guests as a sign of honour. Dry seeds are ground into flour used in making cakes and other dishes. In central Benin, for instance, people eat a fried paste made from the seed alone (‘ata’) or with fermented maize paste (‘akassa’). Sometimes roasted seeds of black-seeded types or fresh unshelled pods are boiled with salt and eaten as snacks. Kersting’s groundnut seeds play an important role in traditional customs in West Africa, particularly in Togo, where they are used in funeral ceremonies of the Kabyé and Mauba people. This seems to have contributed largely to the survival of the crop in northern Togo. In many areas consumption is limited to the male members of the family, the headman in particular, and the seeds are a favourite dish of voodoo priests. In the tradition of the Sisala people of northern Ghana boiled seeds are the only food served to surviving children during the funeral of their mothers.

The leaves of Kersting’s groundnut are sometimes eaten as a vegetable or in soups. In northern Ghana and central Benin the water in which the seeds have been boiled is taken against diarrhoea. Powdered dry seed mixed with water or local beer (‘pita’) is used as an emetic in case of poisoning. Leaf decoctions act as a vermifuge. The Igbo of Nigeria use the plant in the treatment of dysentery, venereal diseases, fever and diabetes. In arid zones, the vegetative parts serve as fodder after the harvest.

Reliable production statistics for Kersting’s groundnut are not available because it is of little economic importance and mainly grown for local consumption. Some trade exists between neighbouring countries such as Togo, Benin and Nigeria, but no statistics exist. Because of the low yield and poor storage capability the economic importance of Kersting’s groundnut has decreased considerably in recent times.

Macrotyloma comprises about 25 species, most of which are restricted to Africa. In Macrotyloma geocarpum 2 varieties have been distinguished:

Genotypes are distinguished on the basis of seed colour. White types are best known and used as food, whereas black types mainly serve as medicine or in cultural ceremonies, although they are also used as food.

Germination of Kersting’s groundnut normally occurs within 3–5 days after sowing. The seedling emerges with simple, opposite primary leaves; the first 3-foliolate leaves appear after 5–10 days. Flowering starts 30–65 days after sowing and may continue until the plant dies. Self pollination is the rule and 2 days after fertilization a stalk is formed at the base of the ovary, carrying the ovary to the ground. This mechanism is similar to that in groundnut, but different from that in bambara groundnut, where the peduncle grows to the ground. Pods mature either on the soil surface or 1–2 cm under it. They reach maturity 40–60 days after flower opening. The duration of the crop cycle is 90–180 days. Kersting’s groundnut effectively nodulates with nitrogen-fixating bacteria of the Bradyrhizobium group.

Kersting’s groundnut is found at altitudes up to 1600 m. It requires ample sunshine and an average temperature of 18–34ºC. It is grown successfully in semi-arid regions with an annual rainfall of 500–600 mm in 4–5 months, but it is also found on the fringes of the humid tropics. Kersting’s groundnut tolerates poor, sandy soils, but sandy loams are required for optimum yields. It is often found on slightly acid soils (pH 5).

Kersting’s groundnut is propagated by seed. Seeds used for planting are retained from the previous harvest though some farmers may buy them locally. The 1000-seed weight is 50–150 g. In West Africa Kersting’s groundnut is sown from the beginning to the middle of the rainy season. It is grown mostly in small fields or backyards, in pure stands or intercropped with yam, cowpea, cassava or other crops on mounds, beds or ridges. When grown as a sole crop, it is often the first crop in a rotation, planted in rows 30–40 cm apart and 15 cm within the row.

Cultivation of Kersting’s groundnut is traditional and management mainly consists of 2–3 manual weedings. The use of inorganic fertilizers is not common.

In semi-arid regions Kersting’s groundnut is not subject to serious attacks from diseases or pests. In more humid regions fungal diseases (rust, mould) may occur. Stored seed is very liable to infestation by weevils (Piezotrachelus spp.) and beetles (Bruchidae).

Kersting’s groundnut is harvested when leaves start to turn yellow and wither. As the crop is harvested in the dry season, farmers generally dig up whole plants using a hoe and leave them in the field to dry for a few days, after which the pods are picked by hand, allowing easy separation of the pods. Often some seeds are left in the ground after harvesting and germinate with the return of the rains, thus enabling Kersting’s groundnut to persist in a semi-wild state.

After harvest, the pods of Kersting’s groundnut are dried in the sun to a moisture content of about 12% and stored in granaries or anywhere in the house. They are shelled using a pestle and mortar or by beating with sticks. Usually the major part of the production is sold. Seeds are mostly kept in sealed containers. They are mixed with sand, pepper, ash or insecticide to ensure longer storage.

Work on the genetic resources of Kersting’s groundnut is relatively recent, and only a few small collections are available. Twelve accessions collected in West and Central Africa are kept in the gene bank of the International Institute of Tropical Agriculture, Ibadan, Nigeria. Other collections are present in Guinea (Bureau des Ressources Phytogénétiques, Conakry, 8 accessions), Ghana (Plant Genetic Resources Centre, Bunso, 8 accessions), Togo (Institut de Recherches Agronomiques Tropicales et des Cultures Vivrières, Lomé, 8 accessions) and Benin (Agricultural Research Centre of South Benin, Niaouli, 6 accessions). Little is known of the genetic diversity of Kersting’s groundnut. In a recent survey of allozyme variation no diversity was found within and among domesticated accessions and within and among wild accessions, but the difference between domesticated and wild accessions was much larger than that found in other tropical legume species.

No breeding programmes of Kersting’s groundnut are known to exist.

Kersting’s groundnut is a traditional crop of West Africa, and it has largely been replaced by more productive and profitable crops, such as groundnut and cowpea. The low yields, small size of the seeds, amount of labour required for harvesting, and the liability to storage pests are the main causes for its decline. Kersting’s groundnut has not entirely disappeared due to its role in traditional ceremonies, but the fact that at present it is mainly grown by elderly people indicates that the decline will continue and that the prospects for this crop are bleak.